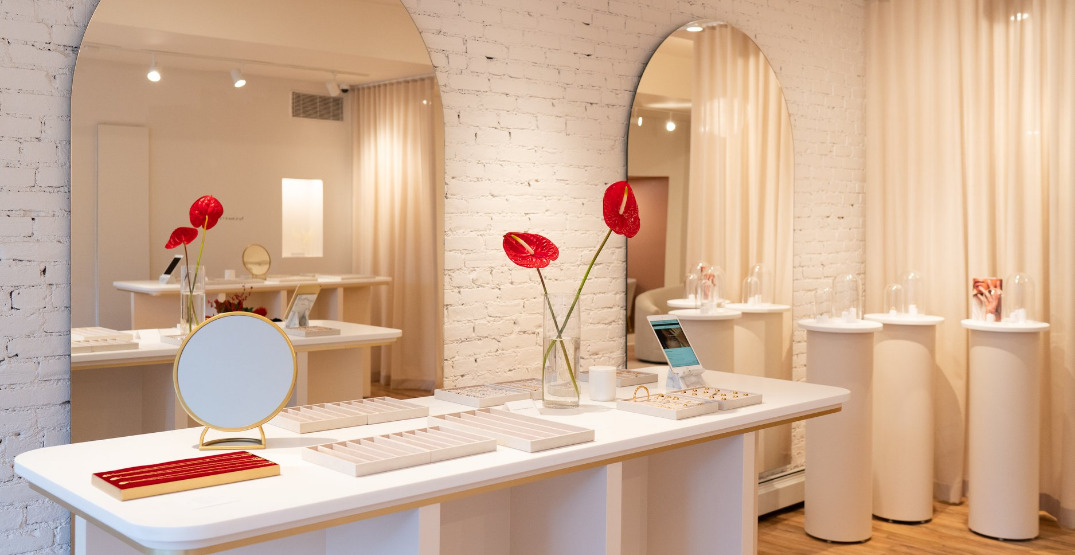 You may need to rework your Christmas shopping list with the brand new Mejuri brick-and-mortar store set to open in Vancouver on December 10.

The grand opening follows a successful pop-up campaign in 2019, which Mejuri tells Daily Hive led to 75% new customers and a 295% increase in e-commerce revenue in BC that month.

The Vancouver location in the Kitsilano neighbourhood is Mejuri’s eighth location. It joins seven others that are open across North America and the United Kingdom.

A press release from Mejuri teased the intricate details that went into creating the iconic experience for Vancouver.

“The exquisitely curated yet playful space is designed in natural tones, crafted in light wood with touches of gold.”

The space will be reminiscent of Mejuri’s existing stores, with custom mirrors, millwork, and jewellery displays – all of which are designed in-house.

“The curved feature wall leads visitors to the concierge bar to garner counsel on the delicate art of layering jewellery. Intimacy is involved within the space by having the collections displayed within reach on ring bars and necklace wall displays, as if you were trying on a friend’s personal collection.”

At the opening weekend, visitors will be given a gift with purchase, as well as an opportunity to win special giveaways. They’ll also have croissants and coffee available.

The Canadian brand was founded in Toronto in 2015. The company operates direct-to-consumer and has seven retail locations worldwide, including New York, Los Angeles, and Boston.