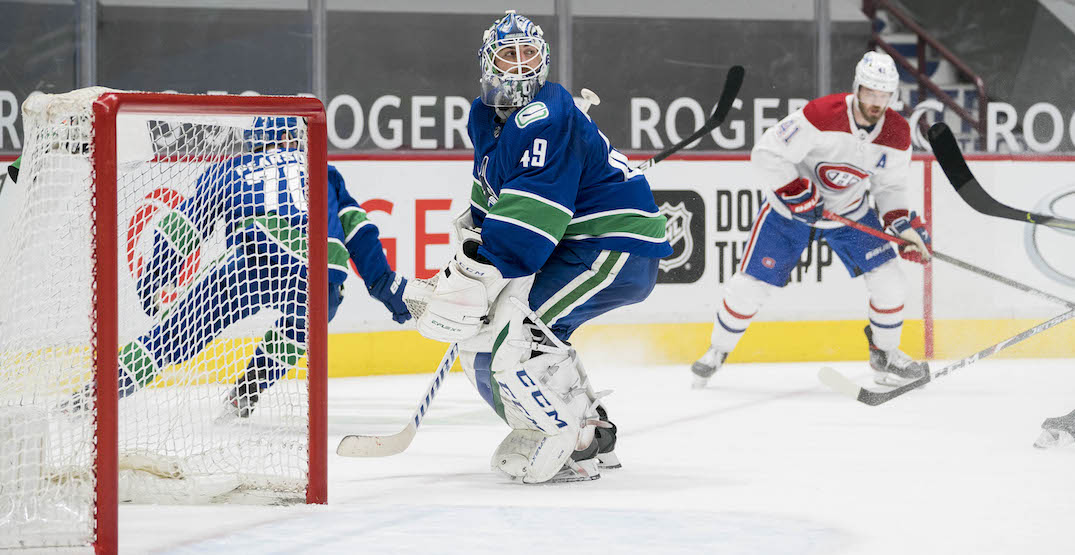 The Vancouver Canucks had a bit of a tumultuous offseason.

Faced with a cap crunch, the team had to make more difficult decisions on players than any other time in nearly a decade.

Jacob Markstrom, Tyler Toffoli, Chris Tanev, and Troy Stecher all left town for various reasons, despite each one of them having an apparent desire to remain in Vancouver.

So the Canucks moved on.

Their biggest acquisition was defenceman Nate Schmidt, who they got in a trade with the Vegas Golden Knights. Former Vezina Trophy winner Braden Holtby was signed early in free agency, to form a goaltending tandem with Thatcher Demko.

Travis Hamonic was also brought in to fill Tanev’s role, as he was paired with Quinn Hughes. The team also said they were going to give an opportunity to some of their young defencemen, with Olli Juolevi and Jalen Chatfield earning spots on the opening night roster. Another youngster joined the team on forward, as 2019 second-round pick Nils Hoglander earned a spot in training camp.

So how have the new additions fared? Let’s find out by giving them all letter grades, with their marks based on their level of play compared to their contract and expectations coming into the season.

It hasn’t gone well for Holtby in Vancouver. The 31-year-old currently has a .893 save percentage in 11 games, which is the fourth-worst save percentage among the 36 NHL goalies with 10+ starts this season.

Holtby’s save percentage is worse than his career-low (.897) that he posted last season. There’s still time to improve those numbers, but certainly, he doesn’t look like a $4 million goalie. He’s now a clear backup to Demko.

Paired primarily with Alex Edler in a shutdown role, Schmidt has been one of the Canucks’ best defencemen this season. His stretch-passes have been a thing of beauty.

Great look off by Schmidt, opens up a seam for the breakaway pass to Gaudette #Canucks pic.twitter.com/GYnwYpsdez

Still, we can’t give Schmidt top marks given his $5.95 million cap hit, coupled with the fact that his offensive numbers are down considerably (just seven points in 26 games).

He has also been guilty of some horrendous giveaways, particularly early on.

After getting the pass from Demko, Nate Schmidt's pass goes off Dube, off Demko and into the net. #CofRed #Canucks pic.twitter.com/wbPSINm1q0

Like Holtby, Hamonic’s best days are clearly behind him at this stage of his career. While the Canucks got him on a reasonable dollar figure, at $1.25 million, there was hope he could return to being a reliable top-four defenceman.

Instead, Hamonic was a disaster to start, which can be excused somewhat given he was thrown into the fire after a long layoff and missing training camp. He’s been better (it would be hard to be worse) since returning to the lineup from injury, but still appears to be a significant downgrade from Tanev.

Miscommunication by #Canucks on the 4th Oilers goal. Hughes is out of the box, and thus acting as a winger. Hamonic chases his man to the point and is slow getting back.

Looked like Hamonic thought Hughes was covering him and Hughes thought Hamonic was coming back. pic.twitter.com/x58PwLZZwb

Highly-skilled but undersized, most people thought Hoglander would need time in the AHL before excelling with the Canucks, never mind doing it consistently in a top-six forward role.

The 20-year-old has 10 points in 26 games, but his play away from the puck has been equally impressive. Hoglander’s not shying away from contact either, as he’s proving to be a very tenacious player.

Appearing in 15 games so far, Juolevi has been unspectacular, but steady, as a third-pairing defenceman. He’s being given sheltered minutes though, averaging just 13:12 of ice time per game with just one goal and no assists, so that tempers the enthusiasm.

Juolevi moving Tkachuk out of the way like he did at the 2016 draft pic.twitter.com/SIBPMkzrnd

Jalen Chatfield showed promising signs in his first few games, and even drew some Kevin Bieksa comparisons on Hockey Night in Canada.

Chatfield needs his Fedor Fedorov moment before Bieksa will let you make the comparison. pic.twitter.com/orwS0D9rTJ

Comparing him to Bieksa is extremely kind, though he did briefly gain the trust of head coach Travis Green. He hasn’t played in nearly a month now, however, sitting as a healthy scratch after faltering on the team’s eastern road trip. Not much was expected of him coming into this season though.