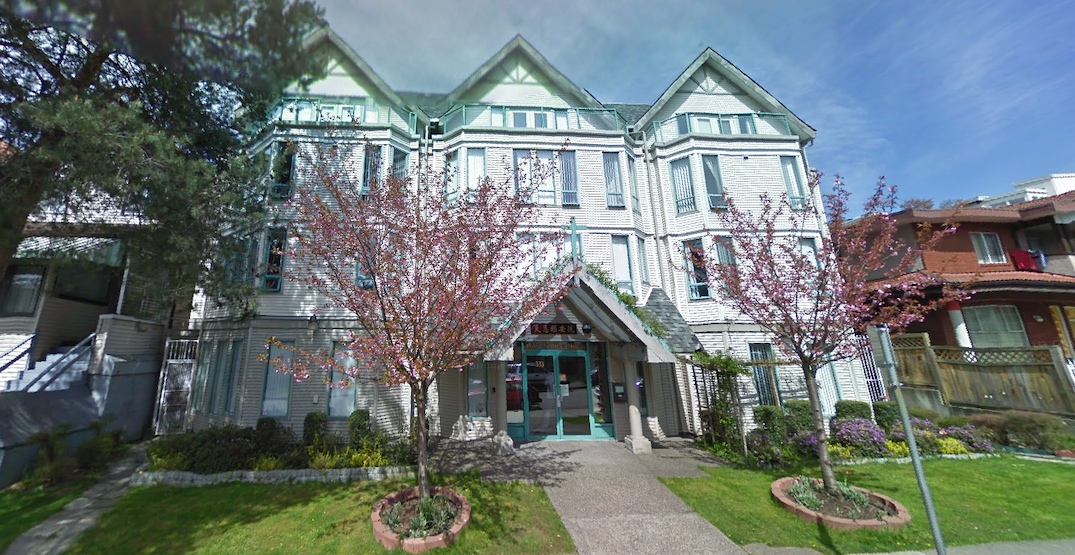 After receiving much criticism over the past few weeks, the plan by a not-for-profit housing operator to evict one vulnerable group from a Vancouver seniors’ care home to make space for a different vulnerable group has been cancelled by BC Housing.

The provincial government announced today it has acquired Grace Seniors Home at 333 East Pender Street near Vancouver’s Chinatown district, putting an end to any uncertainty for existing residents. The property was acquired for $17 million.

Grace Seniors Home is the place of residence for 70 elderly individuals, primarily those who have a link to the Chinese community.

On April 2, the residents were notified that the home had been sold and would no longer be operating by the end of May, which amounts to an eviction that left families with less than two months to find suitable alternative housing during the pandemic.

It had been bought by Lu’ma Native Housing Society with Rapid Housing Initiative funding from Canada Mortgage and Housing Corporation (CMHC) for its conversion into social housing for Indigenous individuals experiencing homelessness.

Following outcry from families and concerned stakeholders, BC Housing later stated the existing residents could stay, but concerns remained over the continuity of the facility’s operations as a specialized care facility for Chinese seniors, with cultural meals and programming for the residents’ unique needs.

BC Housing’s subsequent measures of acquiring Grace Seniors Home from Lu’ma Native Housing Society and transferring the facility’s operations to the United Chinese Community Enrichment Services Society, the not-for-profit widely known as SUCCESS, are intended to directly address any lingering concerns of families and stakeholders.

SUCCESS will operate the building as a seniors’ care home starting on June 15, and the building will also undergo upgrades.

“Culturally sensitive housing for low-income seniors is always important. In the current environment of rising anti-Asian racism, a secure, safe and familiar residence for Chinese seniors is perhaps even more important,” said David Eby, BC Attorney General and Minister Responsible for Housing, and Melanie Mark, MLA for Vancouver-Mount Pleasant, in a joint statement.

“This outcome means that residents can stay in their homes and continue to receive the cultural supports they need. These seniors are reliant on the immediate community, as well as each other, for their health and well-being… We are confident that this purchase, and the operation of this building by SUCCESS, will be a welcome solution for everyone, especially the seniors living at Grace Seniors Home.”

Lu’ma Native Housing Society’s funding from CMHC will be reallocated towards acquiring another building for Indigenous individuals experiencing homelessness.

The rationale for the previously intended use for Indigenous social housing was to save the property that would otherwise be purchased by a private developer, but the affected families argued that the municipal government’s 1999 agreement on the property stipulates that the site must be used on a not-for-profit basis for seniors, making it highly unlikely this would be a desirable location for private development.

Over the last few weeks of uncertainty, local Chinese language newspapers saw advertisements seeking a “warehouse” space to house the affected seniors. There were also suggestions of relocating the residents to three houses or moving them back to family member’s homes, with support from Vancouver Coastal Health homecare workers.

“To evict vulnerable seniors in the middle of a pandemic is heartless. Chinese seniors are being displaced from the community they’ve called home for decades,” wrote a concerned family member in an email to Daily Hive Urbanized last week.

“For non-English speaking Chinese seniors, the culturally- specific services, shops, and support in Chinatown and in their Cantonese senior home are an essential lifeline they cannot find elsewhere. Leaving means uprooting their entire social network and connection to their community, risking severe isolation by being placed in a home and neighbourhood where few share their language or culture.”

Grace Seniors Home is a 2000-built, five-storey building constructed on an 8,800 sq ft lot. The property’s assessed value is $6.1 million, with $4.5 million for the land and $1.6 million for the structure.