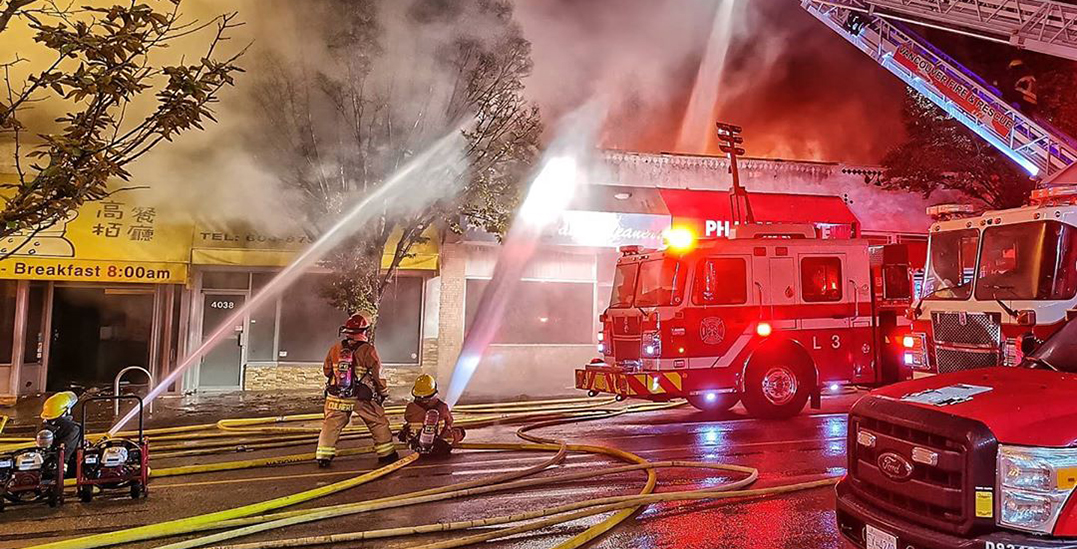 A GoFundMe fundraiser has been started after a number of businesses in Vancouver’s Cambie Village were destroyed by an early morning fire.

The fire broke out on Thursday morning, sometime between 2 and 3 am. Rania Hatz, Executive Director of the Cambie Village Business Association and organizer of the fundraiser, says that the damage is “absolutely devastating.”

“Several businesses were destroyed beyond salvation,” Hatz says in the GoFundMe. “Others suffered extended smoke and water damage.”

Among the businesses damaged are several Vancouver eateries. Hatz tells Daily Hive that the fire began at Copa Cafe, a Hong Kong-style cafe located on the 4000 block of Cambie Street.

Other food and beverage establishments affected include Yi Fang Fruit Tea, which was “completely destroyed,” and TonTon Sushi, which suffered water and smoke damage.

A locally-owned Pharmasave and a dry cleaner were also destroyed by the fire.

“In addition to the expenses that the owners will face before insurance assistance is available, staff of these businesses will also need help,” Hatz writes. ” Cambie Village would like to help with these merchants and their staff with immediate assistance as needed.”

Hatz tells Daily Hive that for relatively new businesses, such as Yi Fang Fruit Tea and TonTon Sushi, insurance won’t cover much of the loss.

“There’s a huge financial investment and blood, sweat, and tears that go into that,” she explains. “Insurance doesn’t cover your year of paying rent on a lease without having any revenue.”