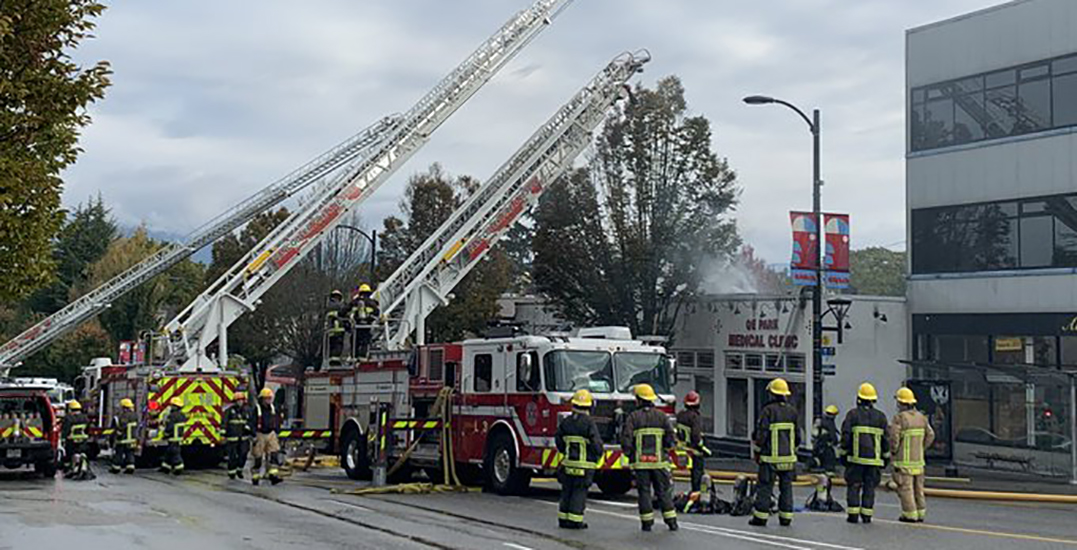 A number of local businesses and restaurants have been destroyed after a devastating fire on Thursday morning.

Rania Hatz, Executive Director for the Cambie Village Business Association, tells Daily Hive that the fire began sometime between 2 and 3 am.

“I woke up by 4:30 am and there were already seven firetrucks,” she said in a phone interview.

Hatz says that the fire started at Copa Cafe, a Hong Kong-style eatery located on the 4000 block of Cambie Street. From there, the third-alarm blaze spread to multiple surrounding businesses.

Two adjacent businesses that were ravaged by the fire include a dry cleaner and a Pharmasave that were both locally owned and operated.

“The Pharmasave is a Sole Proprieter,” Hatz explains. “It’s a local woman who owns and runs it so her business is completely gone.”

Hatz says that Yi Fang Fruit Tea is completely destroyed and while they don’t know if TonTon Sushi has been destroyed as well, TonTon won’t be able to open for some time due to smoke and water damage.

There was also a cat boarding facility located above TonTon Sushi. Fortunately, Vancouver Fire Rescue Services (VFRS) were able to save all the animals.

“The Vancouver Fire Department got out all the cats, thank goodness,” Hatz says. “It’s a mixed blessing. Because of COVID-19, people aren’t travelling as much so there weren’t as many cats as there could have been.”

She notes that Yi Fang Fruit Tea and TonTon Sushi are “relatively new businesses,” adding that insurance won’t cover much of the losses.

“There’s a huge financial investment and blood, sweat, and tears that go into that. Insurance doesn’t cover your year of paying rent on a lease without having any revenue.”

Hatz says that the overall damage is “absolutely devastating,” stressing that these businesses “are people’s livelihoods.”

“When you’re a new business and you haven’t started making a lot of money, but you’ve put a lot in, then you’ve had COVID hit you, then you’ve got a fire, it doesn’t matter, no insurance covers enough to make it worth it.”

VFRS continues to extinguish hot spots at the fire, confirming that “catastrophic damage” occurred to the surrounding businesses. There are no injuries at this time.