The George Massey Bridge project, which includes upgrading Highway 99 to modern standards between the Oak Street Bridge and the Delta-Surrey border, has been sitting in purgatory ever since the BC NDP provincial government put the project on hold in September 2017.

During this time, the project has been reviewed by professional engineer, Stan Cowdell, but the results have yet to be released to the public.

Today, many myths and questions are circulating about this project, but when all factors are considered together (including, but not limited to seismic concerns, transit expansion, safety design standards, shipping, pedestrian and cyclist access, cost benefits, and future proofing) a new standalone bridge is the only appropriate solution.

The current George Massey Tunnel (GMT) is 629 metres long and 22 metres deep. It opened in 1959, nearly 60 years ago, and at a time before seismic regulations were given much thought.

The tunnel itself is a single tube divided by a concrete wall. Anyone who has driven through the tunnel can testify to its narrow lanes and claustrophobic feel.

In fact, due to its confined nature, dangerous goods are not permitted to pass through this major regional crossing, impacting shipping in a major port city. Adding to that limitation is a height limit of 4.15 metres.

Conversely, the proposed George Massey Bridge would allow free movement for all goods and vehicles across this pivotal highway link.

It is not only the shipping industry that is negatively affected by the current tunnel’s antiquated design, but also pedestrians, cyclists, and transit riders. Those wishing to cycle between Richmond and Delta are not able to do so through the tunnel.

Instead, they must load their bike onto a limited shuttle service or use a regularly scheduled bus, which is equipped with only two bike racks. These options themselves are not immune to the heavy congestion and delays that occur within the tunnel itself.

Again, the bridge replacement would allow pedestrians and cyclists to move freely from one shore of the Fraser River to the other. Given that this link is officially part of Metro Vancouver’s interim major bike network, being able to ride in a safe and open environment should be mandatory. 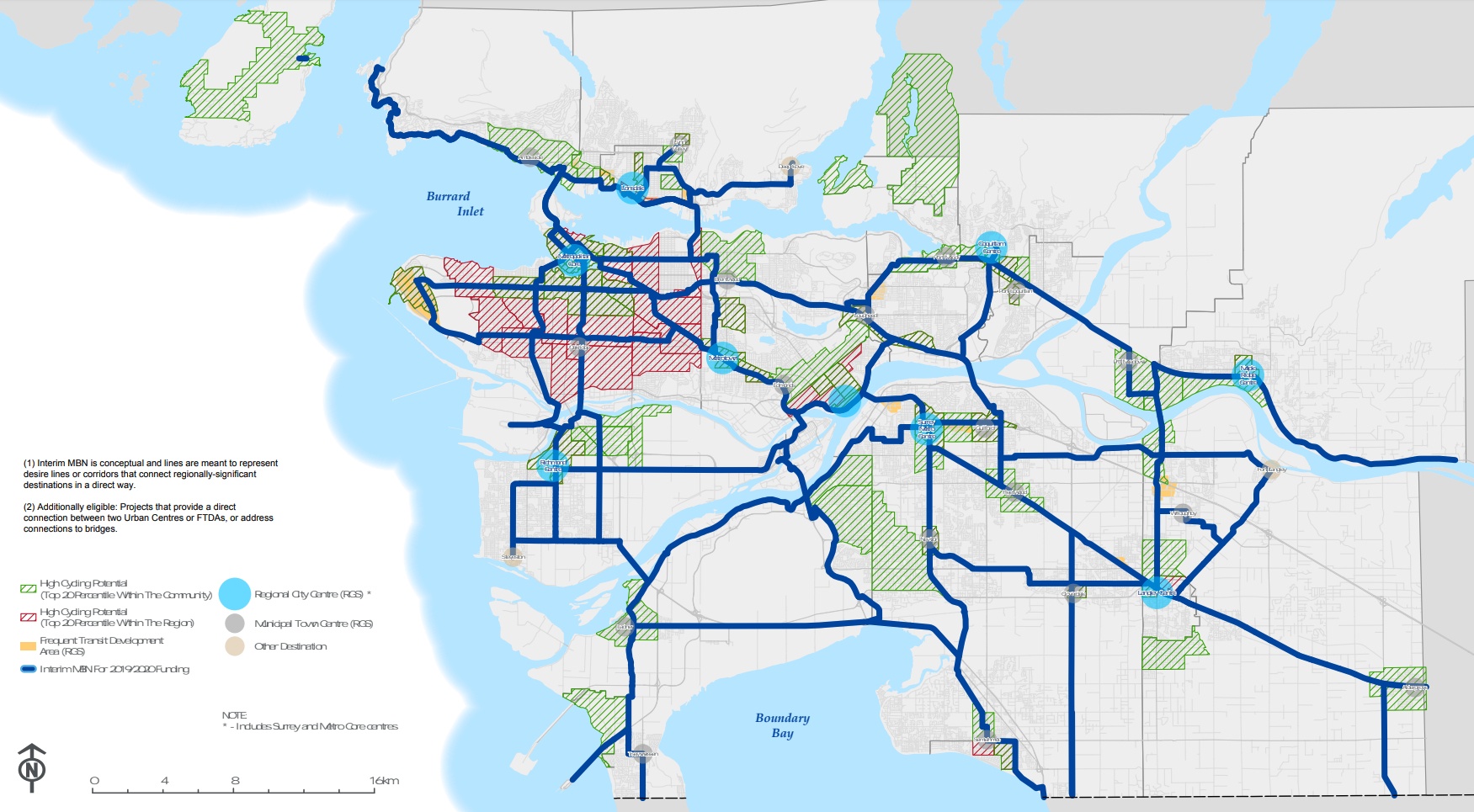 Full map of TransLink’s Interim Major Bike Network, including Highway 99 over the south arm of the Fraser River (George Massey Tunnel) Click on the image to enlarge. (TransLink)

As many already know, traffic jams have become a daily occurrence in and around the GMT, regularly causing delays of half an hour or more. In fact, the GMT has long since reached its saturation point and over the last decade this excess volume has slowly found its way to the Alex Fraser Bridge, clogging yet another crossing.

Some re-configuring has been done to allow buses to skip portions of this gridlock, but these “improvements” are value-engineered band-aid solutions, complete with their own safety concerns and flaws.

Even with the current queue jumper lanes in place, buses are still delayed by traffic within the tunnel itself and surrounding approaches.

More shockingly, most of the “bus lanes” along Highway 99 are actually re-purposed shoulders. This means that the shoulder of the highway acts both as a transit way (with no shoulder itself) and as a location for vehicles to stop when having mechanical troubles or other emergencies. 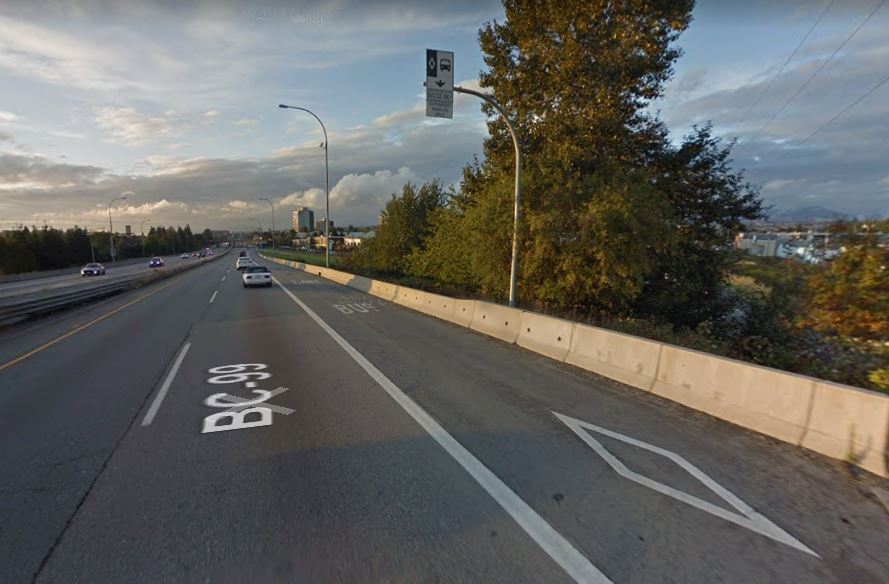 Furthermore, these “bus lanes” dissect both off-ramps and on-ramps along the highway. The hazards associated with this are best exemplified by the “yield to buses when flashing” road signs found along the corridor.

But properly-designed HOV/rapid bus/transit lanes are usually located within the middle of a highway, often with their own dedicated ramps and grade separated stops.

Such highway transit systems are far superior in safety, speed, and reliability, and can be seen locally along Highway 1 from Lougheed Station to 200th Street, and along the I-5 near Seattle. The current setup along Highway 99 is an embarrassment, and can only be improved to adequate levels if the entire corridor is completely rebuilt and modernized.

Rarely mentioned by critics, is that the George Massey Bridge project encompassed doing exactly that.

A proper HOV/bus lane was to run along the middle of the entire project, and included direct bus-only ramps between Highway 99 and SkyTrain’s Bridgeport Station, and two major bus stops within the new interchanges at Steveston and Ladner.

The 601, 620, 351, 354, and 311 bus routes would all benefit greatly from this project, and could even become proper rapid bus routes. That is, only if construction of the currently proposed design is allowed to resume. 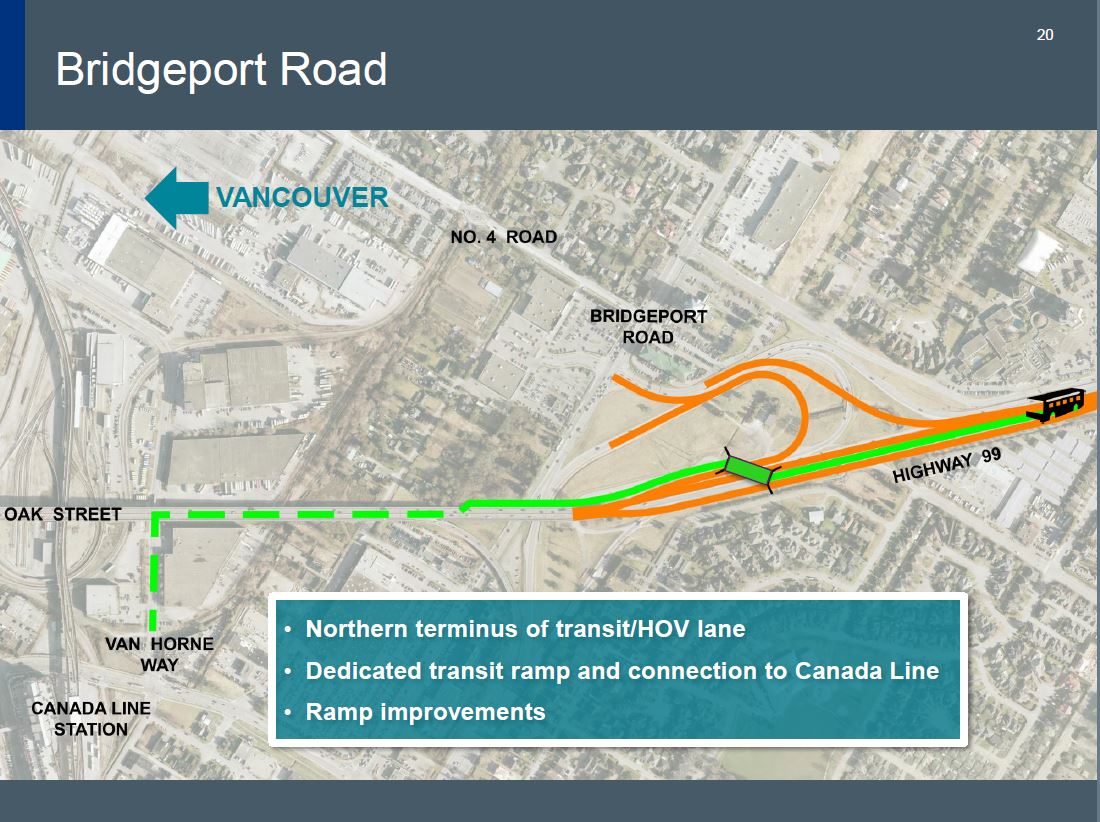 Northern terminus of proposed HOV / Transit Lanes. Note direct transit only connection to Bridgeport Station via flyover. (Government of BC)

Another infamous band-aid solution regarding the existing GMT is the counter-flow lane, which was implemented over 35 years ago.

In the morning, there are three northbound lanes but only a single southbound lane, and the reverse occurs in the evening. The fact that our region’s most important north-south highway corridor (which connects Richmond, Delta, YVR, the Tsawwassen ferry terminal, numerous port facilities, the US border, Vancouver, Surrey, White Rock, and beyond) is reduced to a single lane daily is problematic to say the least.

This counterflow system has also contributed to further degrading the substandard interchanges on both ends of the tunnel.

All of these makeshift solutions, compounded on top of 60-year-old civil engineering, have created what can only be described as a “Frankenstein Highway” of poor quality from end-to-end. The GMT is simply the flagship of this inadequate makeshift state.

These reasons are why something must be done soon, and the George Massey Bridge and its associated highway modernization was, and still is, the solution.

Contrary to popular belief, many other options were considered over the years, and a lengthy period of research and public discussion was conducted before the current replacement design was chosen.

In 2006, the feasibility of expanding the existing tunnel to six lanes was examined and eventually decided against.

Then, between November 2012 and December 2015, three phases of consultations took place. The start of these consultations looked at five potential options.

The first was to simply retrofit the existing tunnel (while the cheapest, this solution did little to address the majority of issues plaguing this crossing and corridor).

Finally, there was the option that was chosen, the George Massey Bridge, which is actually cheaper than the previous three options listed before it

In fact, according to the City of Delta, the lowest bid for the project was nearly one billion dollars lower than the original $3.5 billion estimate.

This option also avoids many of the drawbacks that retaining the existing tunnel would incur. The most glaring issue is that any scheme that involves retrofitting the existing tunnel, alongside with further complicating the surrounding interchanges, would still have to deal with the tunnel’s eventual end of life sooner rather than later. This would require yet another major project and disruption to commuters.

On the other hand the George Massey Bridge would be built with a 125-year lifespan. Simply said, build it once, build it right.

The George Massey Bridge is the only option that properly addresses all of the issues discussed, and it is also the only option that involves a net gain in usable Agricultural Land Reserve (ALR). That’s right, this project would actually free-up land currently occupied by the existing archaic interchanges.

Furthermore, nearly all highway widening would occur within the reserved Ministry of Transportation highway corridor, not on ALR land.

Last but not least, site preparation ahead of major construction had already begun when the new provincial government stopped the project a year ago. This completed work includes tree clearing, preloading along the highway, and preparation for pile driving the bridge piers themselves.

There is of course, if demanded, some room for modification and compromise, while keeping the overall scope of this project intact.

The bridge itself could be reduced from 10 lanes to eight, with three general purpose lanes and a single HOV/bus lane in each direction, although the ability to operate a proper collector and distributor system would be lost.

The designs of the bus stations within the Steveston and Ladner interchanges could be improved upon, making the experience more comfortable for transit users.

On the extreme end, the bus lanes themselves could be extended all the way to White Rock (instead of the currently planned terminus near the Delta-Surrey border), and, if possible, even have the future capability of rail conversion when ridership demands it.

Hopefully, Stan Cowdell and the provincial government have considered all these aspects in making their final decision. Another jerry-rigged solution will only temporarily hold the stitches together on our Frankenstein’s monster of a highway corridor.

The GMT has served its purpose as best as it could given its severe limitations, but it is now time for it to be replaced with the George Massey Bridge. This is the only option that will be beneficial for all.

Build it once, build it right.