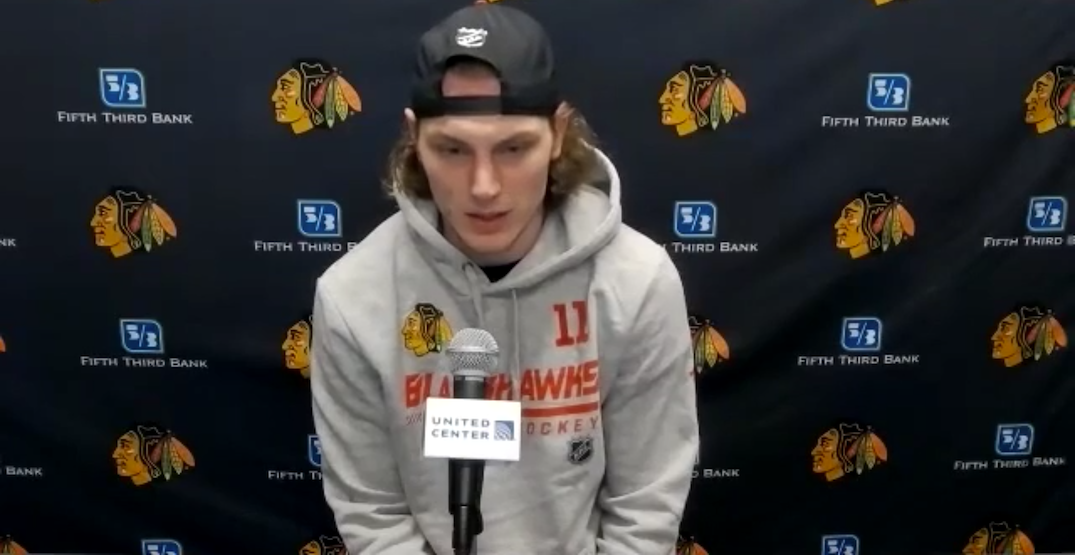 Fresh off scoring his first goal with the Blackhawks last night, Adam Gaudette met the Chicago media for the first time today.

The Blackhawks have been easing Gaudette into the lineup since acquiring him from the Vancouver Canucks on April 12. The 24-year-old has suited up in just two of the first seven games he was eligible to play in with the Blackhawks, as he gets up to speed following a bout with COVID-19.

“COVID hit me pretty hard, but I battled through it and got through it, and I feel back to 100% now,” Gaudette told reporters today. “Honestly, I feel better than I did before and I like where my game is at right now.”

Just why Gaudette was moved to the Blackhawks in the first place has been a topic of speculation. Canucks GM Jim Benning said the former Hobey Baker Award winner needed a “change of scenery” and added that Matthew Highmore “plays a more complete two-way game.” Canucks team physician Dr. Jim Bovard said no single person was at fault for the outbreak, but the timing of the deal did raise eyebrows.

Gaudette was Patient 0 in the outbreak that hammered the Canucks, and there were conflicting reports about how his team felt about that. One report said that management was upset at Gaudette for contracting the virus in the first place, and that his teammates resented him for it.

Today, Gaudette was adamant that rumours about him and his wife, Micaela, were false.

“Don’t believe everything you read on Twitter,” Gaudette said in response to a question about the speculation. “There’s a lot of bullshit going around, a lot of disrespectful things that were said about me and my wife that are just not true.

“I have a great relationship with those guys there [in Vancouver], have a lot of close friends. I got along with everybody really well there. It could have happened to anyone.”

Unlike his former teammates in Vancouver, Gaudette has been afforded the chance to get back up to speed in practice, after spending weeks in quarantine.

Adam Gaudette scores his first goal with the Blackhawks. Has 2 pts in 2 games since trade with #Canucks. pic.twitter.com/nD6PDBOjPD

Despite receiving just 7:39 of ice time on April 19 and 10:44 last night, Gaudette is a point-per-game player so far with the Hawks, notching a goal and an assist in two games. He scored his first goal as a Blackhawk against the Florida Panthers last night.

Gaudette hadn’t been getting the bounces with the Canucks this season, notching just seven points in 33 games. Despite that, Gaudette has never felt better physically. His stomach issues are behind him, and he said that he was even able to add an extra 10 pounds on his 6-foot-1 frame during the season.

“I don’t think I had a bad season this year,” he said. “I had a ton of chances and the puck just wasn’t going in for me this year. I could have had a lot more points. I think I stepped up my game and took it to another level this year, even without the points.”