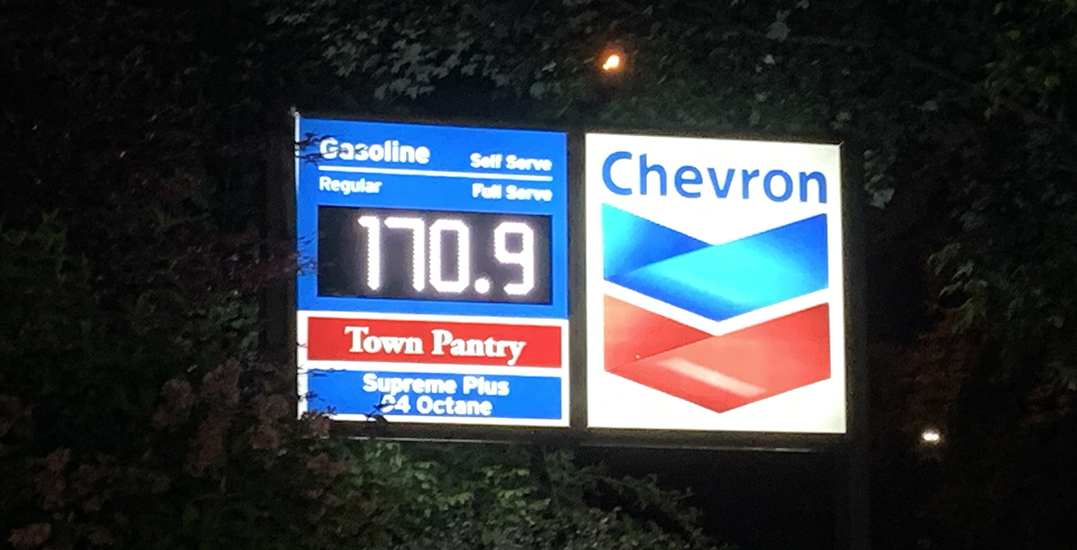 As if the incoming heat wave wasn’t enough, drivers in Metro Vancouver could really feel the sting when filling up on gas this coming weekend.

Earlier this week, Dan McTeague, president of Canadians for Affordable Energy, told Daily Hive Urbanized that he expected gas prices to reach near record highs. The rising prices were likely due to issues at a refinery in Washington State that have caused it to shut down for a week or two.

⛽️ Price ⚠️: After rising 2 cents Wednesday to 165.9 cts/l, #Vancouver ⛽️ prices to rise ANOTHER 2 cents to 167.9 a litre. #Vancouver now has distinction of North America’s highest priced and being highest taxed jurisdiction on fuel ($6.36 a US gallon, Cdn) $1 higher than Cali

By Thursday night, gas prices were seen hitting $170.9 cents/litre across the Metro Vancouver region. According to GasBuddy, the high price points were spotted in Surrey, Maple Ridge, Pitt Meadows, and Port Moody, among other areas.

The record-high price for gas in the Lower Mainland is 172.9 cents/litre, set in April of 2019. During that month, Metro Vancouver broke its own record for highest gas prices four times.

At the time, it wasn’t only a record-high price for British Columbia, but for the rest of Canada and North America as well.

“I think there will be a dip. When that happens might be another week before we see prices climbing back down,” says McTeague.