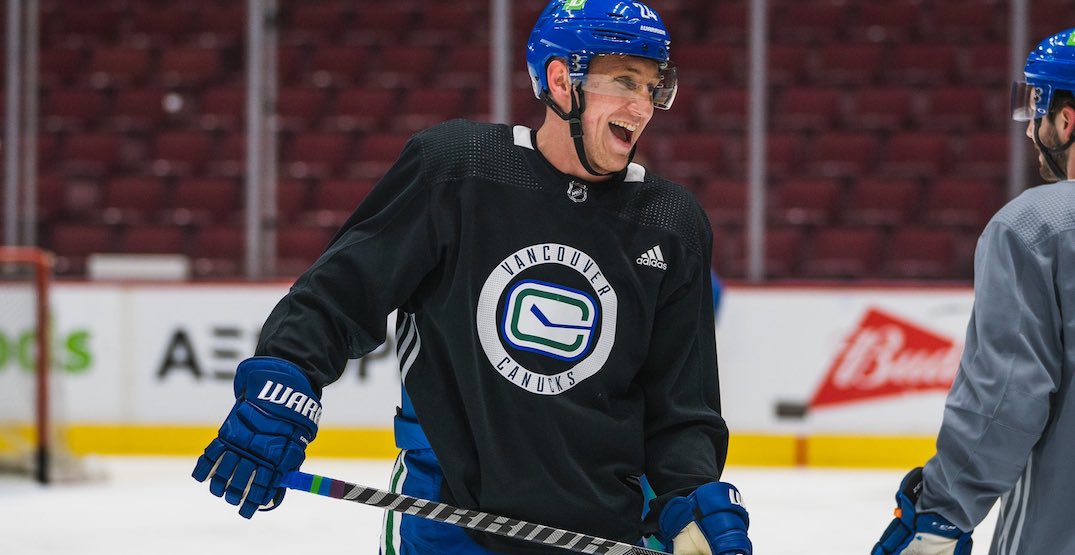 The Vancouver Canucks added one new player via trade prior to Monday’s deadline.

That would be 25-year-old Travis Dermott, who was dealt to the Canucks from the Toronto Maple Leafs on Sunday.

Here are some fun facts about the newest Canucks defenceman.

1. He was a closeted Canucks fan

As a Newmarket, Ontario native, it was always Maple Leafs first in the Dermott household.

However, that didn’t stop Dermott from having a second team in the back of his mind.

“I mean, I know the Toronto Maple Leafs, off the bat they loved that I had all the Leafs stuff in my bedroom as a kid. But, I actually also had some Vancouver stuff that I might have had hidden away,” Dermott said during his media availability.

“Vancouver has been my team in the past, so, you know, I’ve always had the Canucks in the back of my mind but I never really thought I’d be here.”

2. His mother was a figure skater

Instead, Dermott spent time on the ice with his mother, Paula, who is a retired figure skater and coach with the Newmarket Figure Skating Club.

Dermott mentioned wanting to be a figure skater like his older sister back in those days. Even now, he credits figure skating for part of the reason that he’s an above average NHL skater.

“It helps tremendously with edges and stuff like that, using your hips, instead of just straight forward and side-to-side,” he said in 2017, per The Athletic.

Now that he’s in the Pacific Division, Dermott will be seeing a lot more of superstar Connor McDavid.

That’s nothing new for the Canucks’ most recent addition.

Dermott and McDavid are childhood friends, and they played on the same hockey team for a number of years.

They were on the same squad from novice (U9) to peewee (U13) with the York-Simcoe Express. With that team, Connor’s dad, Brian McDavid was the head coach while Travis’ father, Jimmy Dermott, was the assistant.

Florida Panthers forward Sam Bennett was also on that team.

After briefly going in different directions, Dermott and McDavid ended up playing for the same junior team, the Erie Otters, for two seasons before the 2015 NHL Draft.

Aside from their long history of playing together, Dermott also mentioned that he and McDavid played lacrosse together growing up.

Aside from Dermott’s admitted fandom about the Canucks, he has a couple of other interesting ties to the organization.

While the smooth-skating defencemen was down in the AHL with the Toronto Marlies, he scored his first goal in professional hockey against Utica Comets goaltender Thatcher Demko back in October 2016.

When Dermott made his NHL debut about a year and a half later, that also came against the Canucks. He picked up an assist in a 3-2 Maple Leafs win against Vancouver back in January 2018.

Dermott also admitted that the only Canuck he knows currently is Nic Petan. The two were in the Leafs organization together from 2019 to 2021.

Like many defencemen, Dermott came out of junior as a point-producing blueliner who was used to playing on the first power play unit.

His usage quickly changed under then-Marlies head coach Sheldon Keefe, who groomed him into more of a defensive defenceman and penalty killer.

Keefe also switched the left-shot D-man to the right side. That was seemingly due to the fact that back in 2018, the Leafs have a plethora of left-shot defenders, and a lack of defencemen who could play the right side.

Despite playing the first 37 games of his NHL career back in 2017-18, he ended up back with the Marlies for the AHL playoffs, where he helped the team win their first ever Calder Cup.

If you look around the NHL, you’ll see that most nicknames end in -y (like Mysie for Tyler Myers) or -er (like Schenner for Luke Schenn).

According to this article from 2020, Dermott’s nickname on the Leafs was “Skin Doctor,” which is in reference to his last name being similar to “dermatologist.”

Over the years, fans have become enamoured with the dogs of Canucks players.

Forget the #DAYTONA500 , we have player dogs racing in the #Canucks Top Dog race 🏁🐶 pic.twitter.com/f7yBYTmwIJ

Niylah, whose name was inspired by Shania Twain, is used to being in the spotlight. The pup, along with her owner, Dermott, were brand ambassadors for the pet food, Nulo.