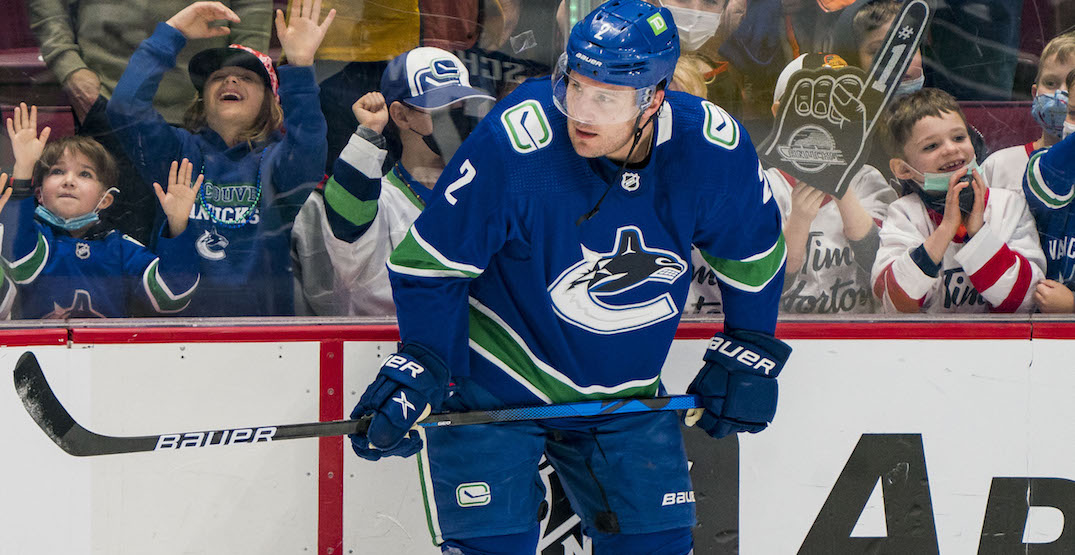 Heading into trade deadline day, one of the most likely players to be moved off the Vancouver Canucks’ roster was Luke Schenn.

The 6-foot-2, 225-pound blueliner is having a strong season. He’s not fleet of foot, but he hits like a truck. Schenn has played in a top-four role on the Canucks’ defence for much of this season, posting better-than-expected offensive numbers (13 points in 48 games) and solid underlying numbers (50.42 CF%).

Though he’s more well suited for a third-pairing role, he hasn’t looked out of place alongside Quinn Hughes, which is a credit to the 32-year-old.

Add in the fact that Schenn is a two-time Stanley Cup winner on a cheap $850,000 salary, and what contender wouldn’t want him?

The thing is, the Canucks still need him too.

New Canucks GM Patrik Allvin was guarded in many of the answers he gave during his post-deadline media conference today. That’s understandable — in a hockey media market like Vancouver, giving away sensitive information can come back to bite you.

But he wasn’t guarded on Schenn, who he views in high regard for what the rugged rearguard means to the Canucks on and off the ice.

“I have a lot of respect for Luke Schenn as a player, and more as a person, and what he means to this club off the ice in terms of being a winner, the culture, the commitment he has to be a pro every day,” said Allvin. “For me, it’s extremely important for this young group to have a guy like Luke Schenn here.”

What a difference a few years makes.

When Schenn was first acquired by the Canucks in 2019, he was an add-on in a trade that saw Michael Del Zotto go to Anaheim. Schenn was toiling in the AHL, and played games with the Utica Comets before getting a call up to Vancouver. A top five draft pick 11 years earlier, Schenn was 29, and it looked like his career might be coming to an end.

Now in his second tour of duty with the Canucks, he’s too valuable to let go.

“It’s a privilege to be in this league, it’s an honour to be a part of the Canucks organization and play for this city and fanbase,” Schenn said on Sunday night, when his future with the team was less certain. “I love it here.”

The previous management regime was regularly panned for overvaluing leadership. The difference with Schenn is the Canucks aren’t paying top dollar for his services. And right now, he fits perfectly with the group.

Unlike Tyler Motte, Schenn is under contract for another season, so there also wasn’t a need to rush to any decisions with him.

Not much interest in Motte

Speaking of Motte, the Canucks received an underwhelming return for him, though it appeared to be the going rate for a player with his profile. Allvin waited until the final minutes to pull the trigger on a deal, eventually settling for a fourth-round draft pick from the New York Rangers.

Allvin was asked about the level of interest was for the 27-year-old winger.

“The interest, I guess, was a fourth-round pick,” Allvin said. “There were some teams checking in on him.”

The Canucks did try to sign Motte before the deadline, though Allvin wouldn’t reveal how close he was to coming to an agreement.

“When it was clear for us that we couldn’t re-sign him, we felt that we should try to maximize our return,” he said.

Given that the Canucks have lost five of their last six games, falling four points back of the final playoff spot in the West, Allvin’s job appeared to be straightforward. It would have been interesting to see what he would have done had the Canucks won two of their last three games, and were neck-and-neck with Vegas and Dallas for the last playoff spot.

“Our vision and our goal is more than the next couple weeks,” said Allvin. “We want to create some cap space, we want to get younger, and I think we accomplished that here. This will continue to put ourselves in a better situation for this summer.”