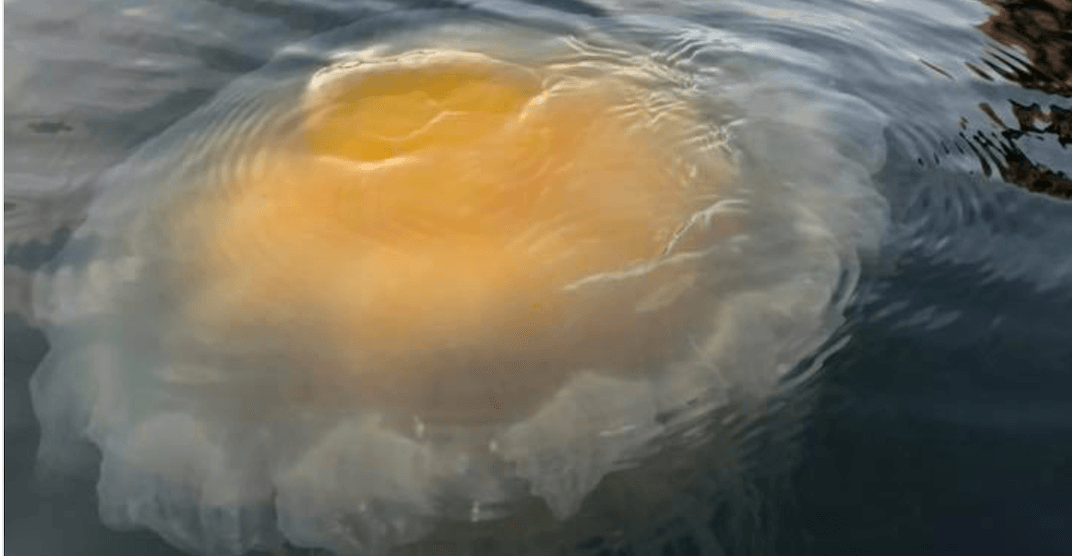 A gigantic “fried egg” jellyfish was just spotted off the Sunshine Coast in BC.

While jellyfish are very common  around the Vancouver area and the Pacific Coast, but it’s been a while since a fried egg — or egg-yolk — jellyfish that big has been sighted by locals.

Incredible! This massive egg-yolk (or fried egg) jelly was spotted off the Sunshine Coast in British Columbia. #DYK? These jellies can grow tentacles up to 20ft long.
Photo: Donna Harrison pic.twitter.com/c6HRbQAaR7

Mackenzie Neal, Ocean Wise’s in-house jellyfish expert, spoke to Daily Hive and told us all about this magnificent, and slightly terrifying, species.

Fried egg jellyfish usually grow to be 60 centimetres in length, about two feet, although the beautiful monstrosity in the picture appears to be much bigger than that.  They can grow tentacles up to 20 feet long.

Jellyfish start off in late winter or early spring as little cute baby jellies, before blossoming into full maturity during the spring and summer when food is aplenty.

They’re alive as long as fall after which they die because of the lack of food in winter.

Fried egg jellyfish are also called Medusa, which means along with plankton, larval fish or shrimp, they also feast on other jellyfish!

While some Vancouverites might feel tempted to reach out and touch this fried egg-like orb, Neal says it’s best to stay far away. Fried egg jellyfish pack a nasty sting.

If you do end up getting stung by jellyfish, Neal suggests staying calm and rinsing with clean salt water.

“If there’s visible tentacles still on you, take a credit card and just slide it under or tweezers or something and pick off the visible tentacles. And if if it’s really bad, obviously we recommend you seek medical attention,” she said.