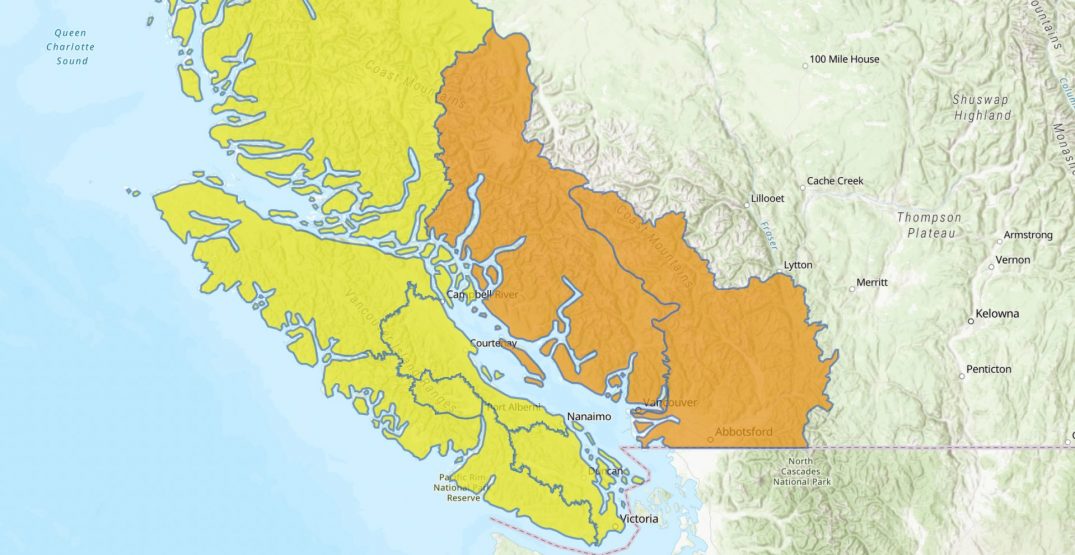 Now, ahead of the coming two storms, the River Forecast Centre has issued a BC flood watch in effect for the South Coast. It includes areas such as:

One region, the Sumas River, including the Sumas Prairie and the surrounding area, is still under a flood warning.

Another agency, Environment and Climate Change Canada said that they were issuing a “red level alert for BC.” ECCC’s Warning Preparedness Meteorologist Armel Castellan shared information about more significant weather on its way to BC in a second rare technical briefing for the week on Friday, November 26.

“So that saturation is part of the antecedent conditions,” he said.

“It’s been a wet fall and the landscape is completely saturated, so any additional moisture runs off.”

Castellan also said that recent fires and drought have changed the landscape in the province, which also changed how extraordinary rain affects the landscape.

The red level alert is a first for BC, as agencies like ECC move from hazard-based to impact-based forecasting.

Warnings are in effect as the next storm has arrived on the north coast. In the Fraser Valley 50-70mm of rain may fall by Friday(Nov.26/21) morning. This may worsen conditions in previously affected areas.
More heavy rain this weekend.
Warnings: https://t.co/PJB6lfNKdu#BCStorm pic.twitter.com/5D4Pn3DnWZ

“This kind of risk matrix incorporates partner information as well as the forecast of the hazard itself, sometimes its multi-hazard or cascading hazard,” said Castellan.

“This alert is really due to the vulnerabilities that present on the ground, particularly on the Fraser Valley,” he said.

Castellan also highlighted the uncertainty in forecasting, saying that the coming storm system on Tuesday has different possibilities.

It could weaken, or it could strengthen and be a 36-hour long event.

In the late morning of Friday, November 26, Environment Canada issued a rainfall warning in effect for Metro Vancouver. They are expecting from Saturday midday into Sunday evening to be extremely wet, with 60 mm of rain anticipated in the southern sections and double that near the mountains.