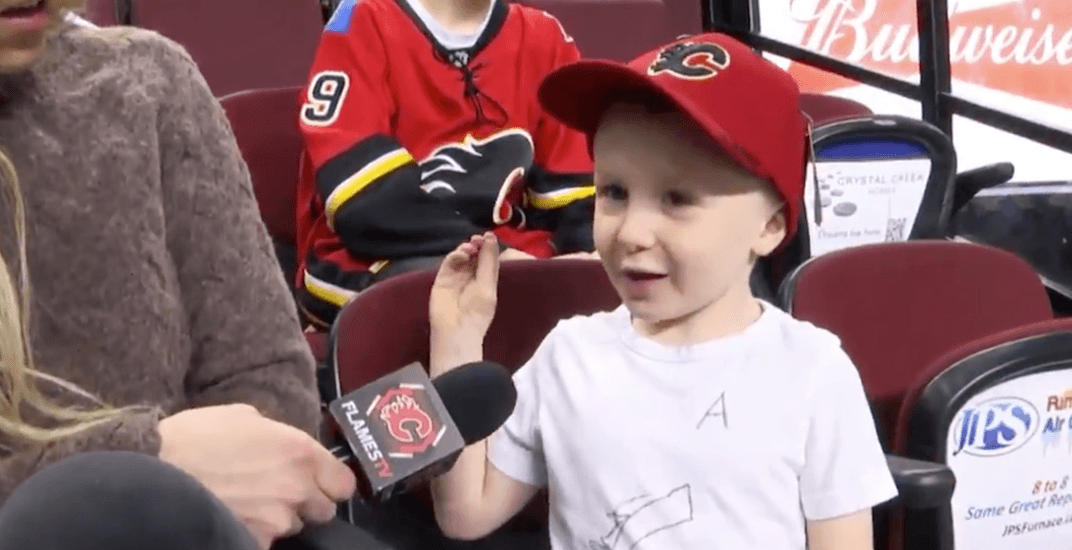 One small Flames fan was in for a treat after wearing a homemade Sean Monahan jersey to Calgary’s Chinook Centre.

Kirsten Hallett, host of Flames TV, was sent a photo of a boy repping #23 drawn onto a white t-shirt, and she took to the internet to find the resourceful fan.

After a post on Facebook and a few thousand shares, she discovered the boy’s name was Eton, and that he had four brothers who were also big fans of the Calgary Flames.

The team decided to bring the boys to a practice and provide them with their own official – and signed – Calgary Flames jerseys.

Mark, Anton, Chase, Bensen, and Eton (the youngest of the five) got to meet the homemade jersey’s name-sake, and they even had a gift to give Monahan after being presented with their new Flames hats and jerseys.

“Nice, thanks buddy! [I’ll] keep those in my stall,” Monahan said on Flames TV after being given some drawings from the boys.

While the jersey may fit a tad too large on Eton, we’re sure he’ll grow into it soon enough.

Eton doesn’t just have a new @Monahan20 jersey – he has an incredible story to tell now, too.

Last week, a young boy was spotted sporting a homemade #23 jersey – #yyc rallied together to find him and once the city did, the #Flames brought Eton & his family in to meet his hero. pic.twitter.com/xhv6MQgdDv