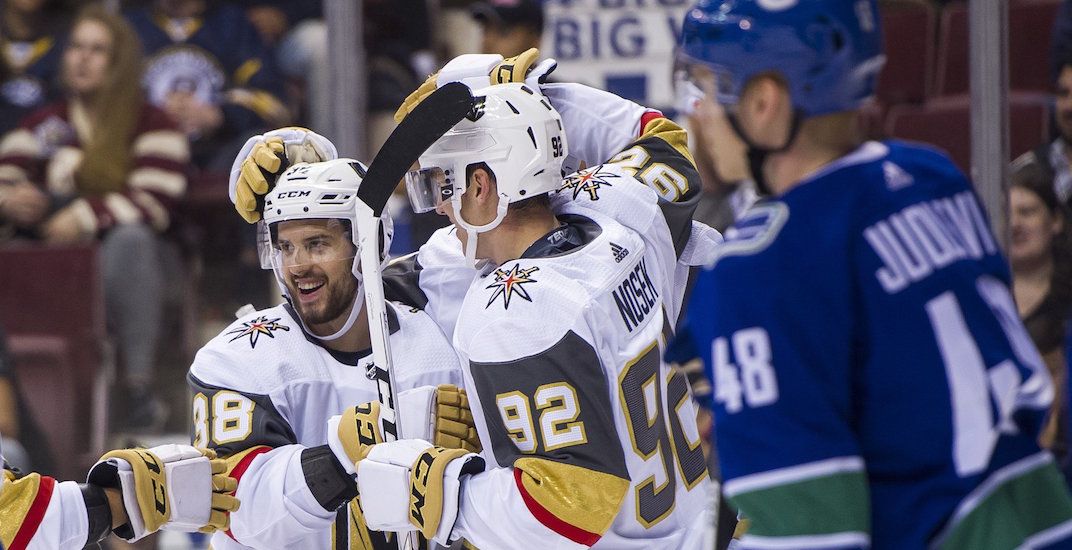 Welcome to the NHL, Las Vegas.

The Vegas Golden Knights got a warm welcome in their first-ever game, pumping nine goals past Canucks goaltenders Richard Bachman and Thatcher Demko on Sunday. Vegas went on to win the preseason game 9-4 against a veteran-depleted Canucks lineup.

If this result causes you to worry about the upcoming season as a Canucks fan, it shouldn’t.

Nearly every player that will make up the 23-man opening night roster was on a plane to China during this one. So was the coaching staff and even the usual Rogers Arena PA announcer, Al Murdoch.

Everyone but Fin, seemingly, was somewhere over the Pacific Ocean.

With the NHL relaxing the minimum veteran rule for the two teams playing in China on Thursday and Saturday, this was perhaps the least-capable lineup iced in the Canucks’ 47-year history.

The Canucks had just 407 games of NHL experienced dressed, with Michael Chaput and Jayson Megna counting for 238 of them.

Evan McEneny was the most experienced defenceman in their lineup, and he has only one NHL game on his resume.

Bachman/Demko will split time in goal.

So this was destined to be a sloppy game. And sloppy it was.

The Canucks held their goaltenders out to dry. Vegas passed through Vancouver’s defence with ease, tallying 38 shots on goal.

The Golden Knights didn’t have a boatload of NHL experience either, it should be pointed out. Vegas forward Tyler Wong has never played in an NHL game, but picked up a hat trick in just 11:02 of ice time.

Likely only one or two players dressed in the game will start for the Canucks on opening night. That increasingly looks like it will be Brock Boeser, who scored twice a day after netting the overtime winner in Los Angeles. He added an assist and had five shots in 18:01 of ice time.

Philip Holm has his sights set on the NHL, but was an adventure. The 25-year-old Swedish defenceman was a minus-3, while being counted on for 25:13 minutes of ice time. He had a brutal giveaway that led to the sixth Vegas goal. He also scored once, had six shots, and hit two posts, so there’s that.

Other players that had noticeable games were Jordan Subban, who scored a goal, and Darren Archibald, who was a physical force.

Nikolay Goldobin didn’t do much of anything for a second straight game, while Anton Rodin was a non-factor.