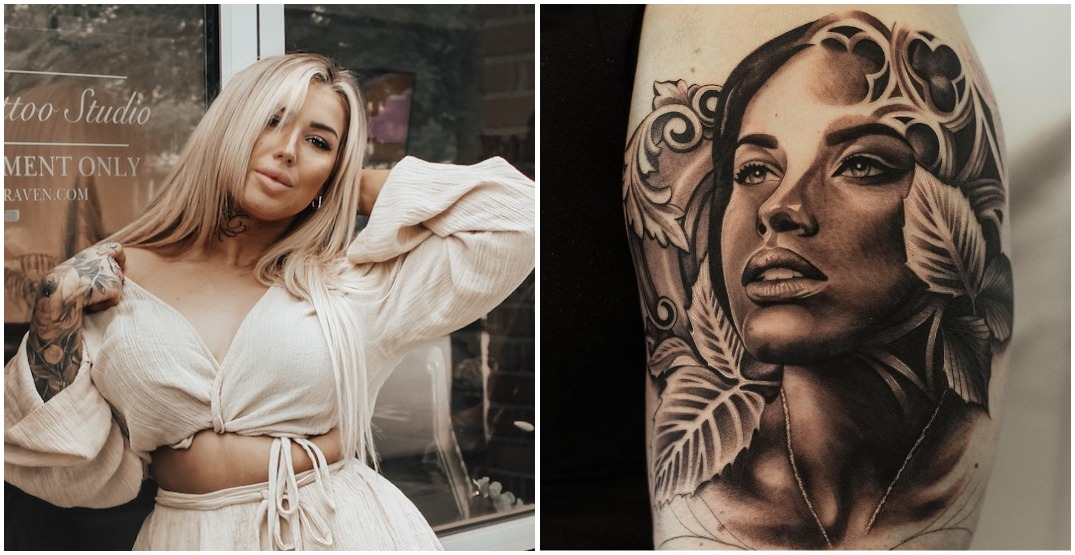 What’s it really like to be a female tattoo artist? Daily Hive spoke to Disa Raven to find out.

As a teenager, Disa Raven struggled with self esteem. She admits, “I never felt good enough or pretty enough or talented enough.” Her 19-year-old self was “bored, unfulfilled and depressed,” a high school dropout “pretty much headed nowhere other than a minimum wage job.”

As part of our Made in Vancouver series spotlighting local businesses, we talked to Disa Raven, the founder of Disa Raven – The Studio about making her mark in male-dominated field.

Vancity has been supporting local businesses like Disa Raven – The Studio with different programs. Now until Sept 30, Vancity enviro™ Visa* cardholders will earn 1.5x the rewards points at select businesses through the Load Up on Local program. To learn more, visit vancity.com/local

She had always loved painting and drawing, but didn’t know how anyone could earn a living from it. “Art is so accessible now that there’s nothing unique about getting a real painting that somebody spent hours and hours and energy and emotion on,” she said.

And she certainly had never considered tattooing as a career path.

“I grew up in a family that did not like tattoos whatsoever,” Raven said with a laugh. Plus, she had only ever seen tattoos that were poorly done or inked in harsh, heavy styles that didn’t appeal to her. “I loved portraits and florals and very pretty things, but I never knew it was even an option to tattoo those things.” 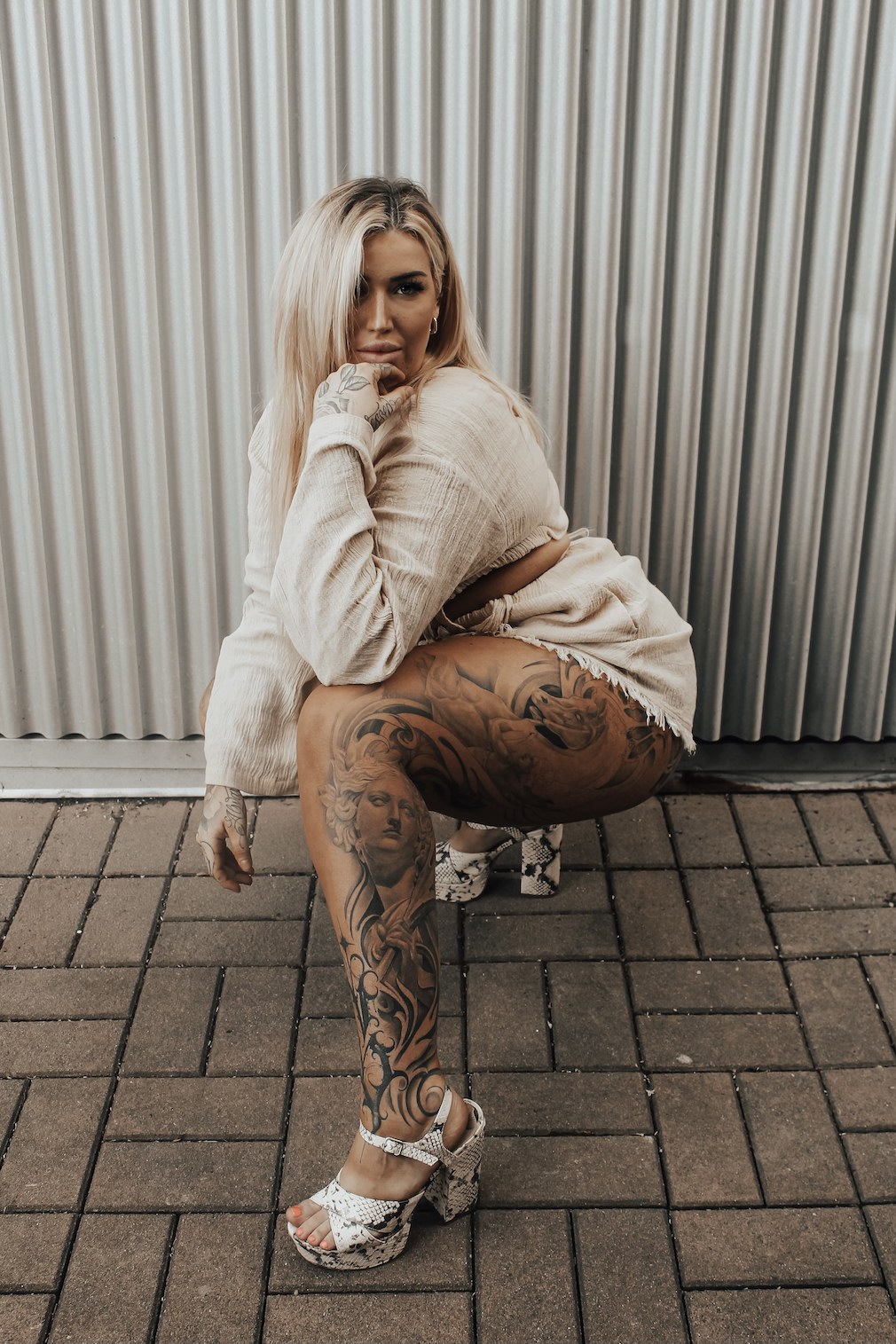 Then, she met a well-known tattoo artist and ended up spending a few months in his Miami studio, learning about the craft.

“They had 12 artists in the studio, and every single one of them was a diehard artist. They lived and breathed their art, and they worked to please their clients and to create memorial pieces and beautiful works of art permanently for people.”

Describing this brief time with the tattoo artist, she said “He was definitely a mentor to me and an introduction into the career.” She returned to the Lower Mainland with a clear goal in mind — but achieving that goal wouldn’t be easy.

According to Raven, “the general way of entering the tattoo industry is to go to a studio and show them your portfolio and hope for an apprenticeship. And most apprenticeships look like: one to two years long, five to seven days a week, eight hours a day, with no pay. Some tattoo studios make you pay them, almost like a schooling format.”

Armed with her small portfolio, she asked a popular local tattoo shop for an apprenticeship. To her surprise, they told her she could start the very next day. But when she showed up for work wearing pants and a hoodie, they were visibly disappointed. “We were kind of hoping that you would show a little something something,” she recalls them saying. She told them “no thanks” and left.

The disappointment was crushing.

“Basically shot down my dreams in 0.5 seconds and made me feel like my only opportunity into this career was going to be as an attractive female, not as a driven artist,” she said. A male tattoo artist often endures hazing and bullying when trying to enter the industry, but Raven says that a female tattoo artist usually faces sexism on top of that. 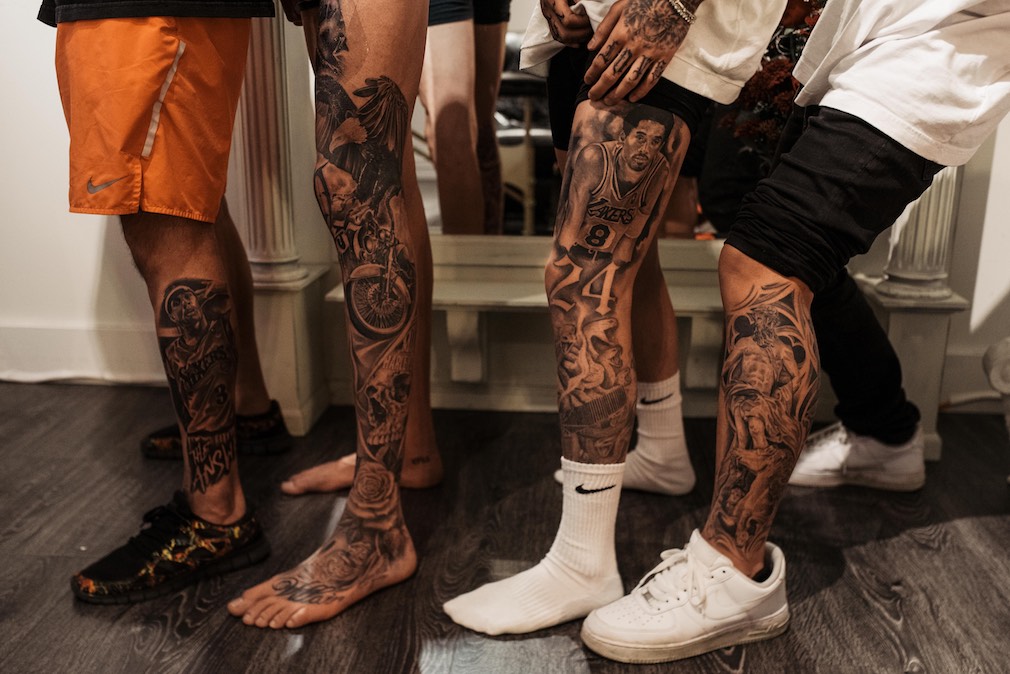 But she didn’t let this setback stop her.

“I ended up deciding to teach myself how to tattoo, with guidance from my mentor,” she said. “I ended up buying all of my own equipment. I was working three jobs at the time to save up enough money to afford everything.”

At first Raven did seven or eight small tattoos per day. Gradually, as her skills and confidence improved, she started doing larger ones. These days, she does only large-scale work, seeing one client per day for about nine hours at a time.

“I have 20 clients right now, and those are the only people I will see for the rest of this year,” she said, adding, “They all come back every two weeks to complete full leg sleeves and full back pieces and full body suits.” 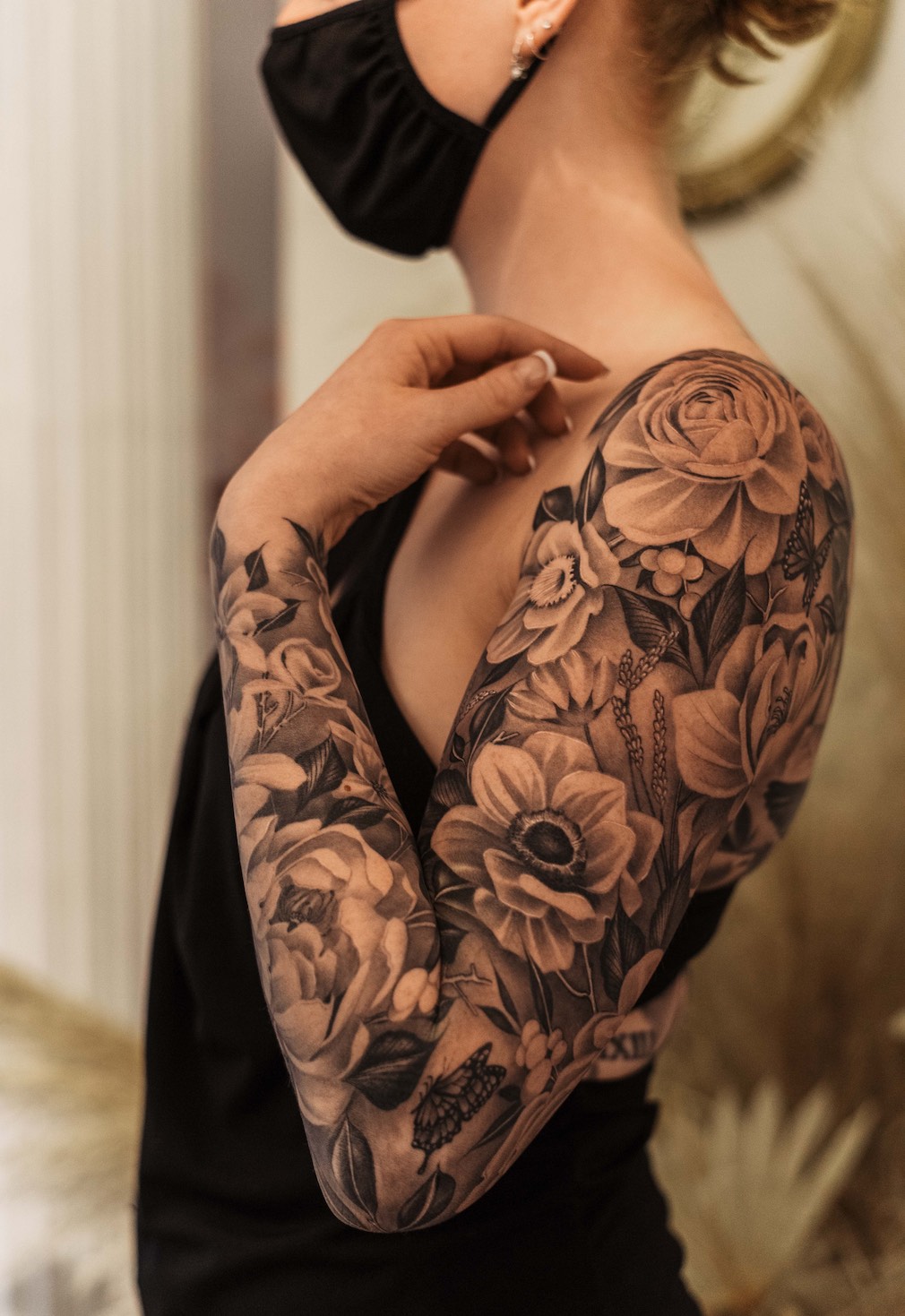 The tattoos she creates are in the black and grey realism style, which involves shading instead of harsh lines. “It’s soft. It’s gentle,” she explained. “It’s more similar to a painting style.”

“The thing that always deterred me away from tattoos were the harsh, dark, black lines, because I’m a very girly girl,” she said.

Three years ago she opened Disa Raven – The Studio in Pitt Meadows. She describes her shop as “pretty,” with the look and feel of a makeup studio as opposed to a typical tattoo parlour.

“I never felt welcome going into a male-dominated studio,” she said. “I feel like building a women’s shop has created a safe space for people to come get tattooed and feel like they can be themselves.” 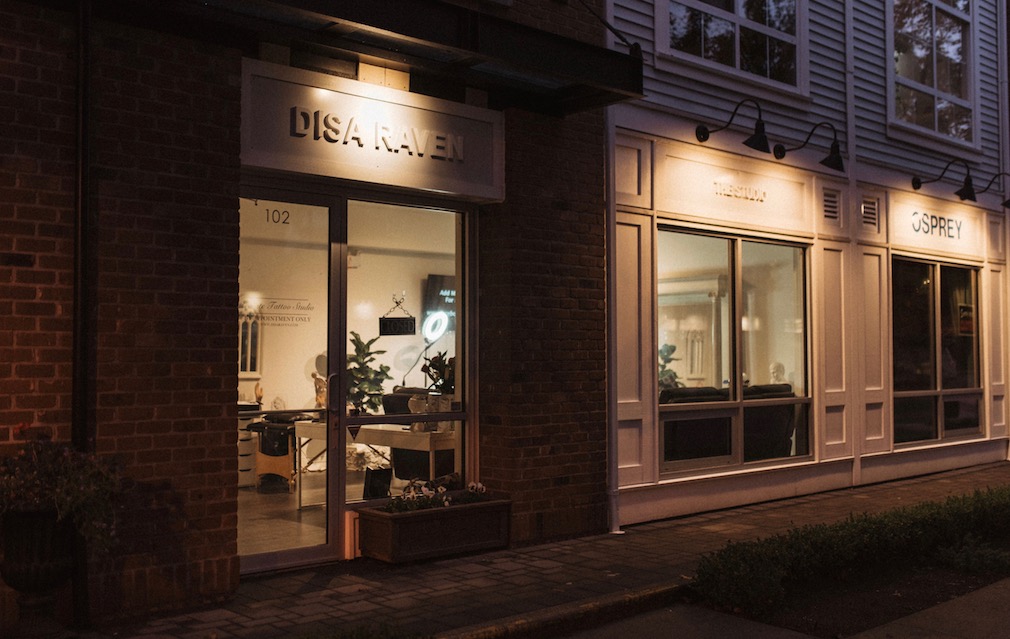 Other than the period of lockdown, when everything was closed, her shop has been busy during the pandemic.

Raven has a theory about that. “People are bored,” she said. “They can’t go on vacation. They don’t know what to spend their money on. So they just want to get tattooed.” And the stringent sanitation procedures required in all tattoo studios (even before the pandemic) are reassuring to a COVID-weary public.

Next month, Raven is opening a new space, a larger shop called Tatt Bratz. She’ll be taking on more artists, in addition to her two female apprentices. “I had decided to take on an apprentice mostly because I was never given that opportunity, and I wanted to give that to someone else, in a respectful manner.”

Looking even further ahead, Raven expresses confidence about her future. “I have massive plans,” she said. “I’m only 24, so I’ve got lots of time.”

Personally, she’d like to travel the world while doing tattoos. She recollects her pre-pandemic trips fondly: “I feel like those were the most inspiring moments of my entire career, because I was able to meet new artists with different perspectives, different careers, different everything.”

She continues, “My ultimate goal in my career is to own a shop out here that has a bunch of female artists, just working really hard and doing their own thing.”

Above all else, she never forgets the trust that her customers put in her every single day. She said that putting permanent artwork on a person’s body is “the highest honour.”

One of her best customers — who’s also become one of her closest friends — originally emailed her to request a small, simple tattoo. She declined, saying, “I don’t really do small tattoos.” He responded by asking if she had any ideas for something larger.

Feeling inspired, and without even requesting a deposit, Raven spent hours doing a custom drawing and sent it to the potential customer. He messaged back immediately: “I love it. Let’s book it right now.”

Later she asked him why he had been so quick to agree to a three-session, 19-hour tattoo. “You were so passionate about this idea,” he told her. “I respected you as an artist, and I wanted to allow you to create your art.”

Raven was dumbfounded. “I think that was one of the first times that somebody had given me that opportunity as an artist to truly just create for them, without any resistance.” She describes it as “absolute, total creative freedom.” 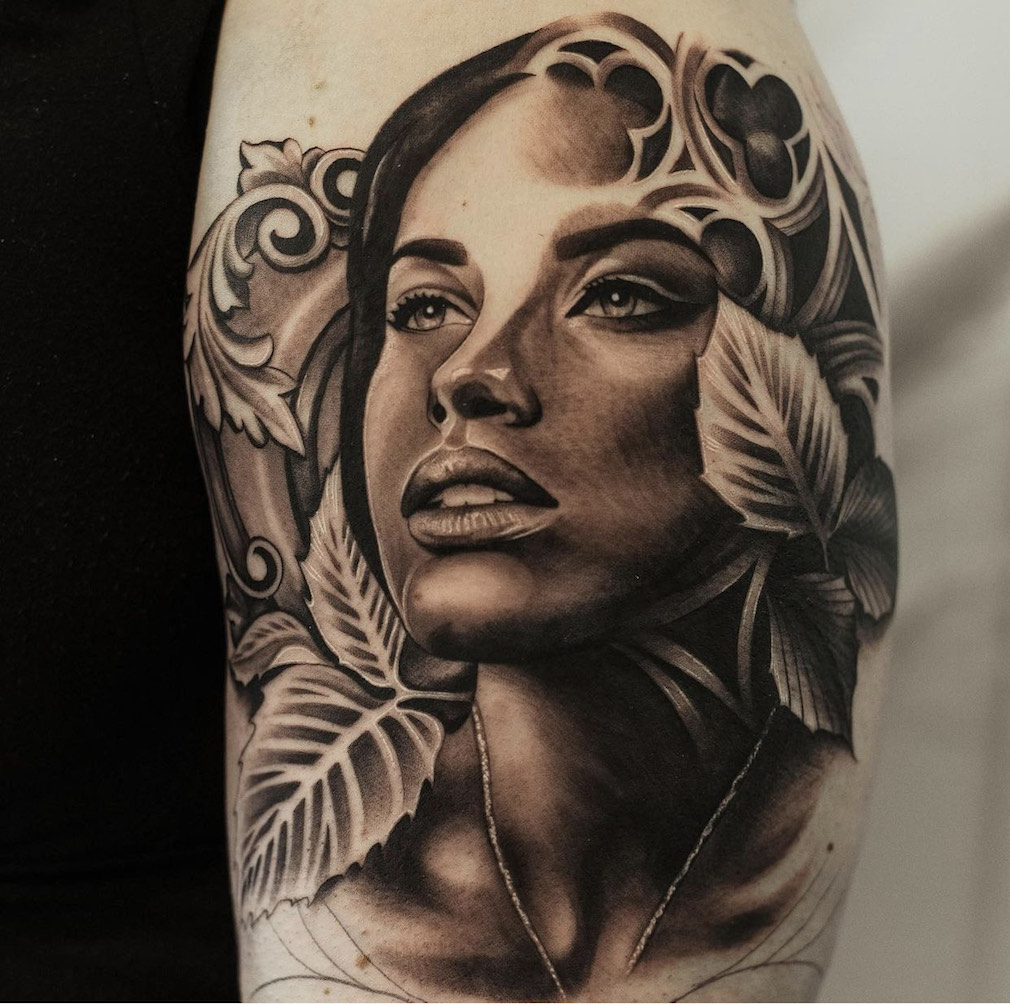 She’s come a long way since the sad and directionless 19-year-old she once was. Her career path — especially as a female tattoo artist — has been filled with snags and setbacks, but now Raven exudes optimism and confidence. “I don’t feel like before tattooing I ever had anybody that thought I would go anywhere. I feel like I motivate people now,” she said.

“I don’t know what I would be without tattooing.” 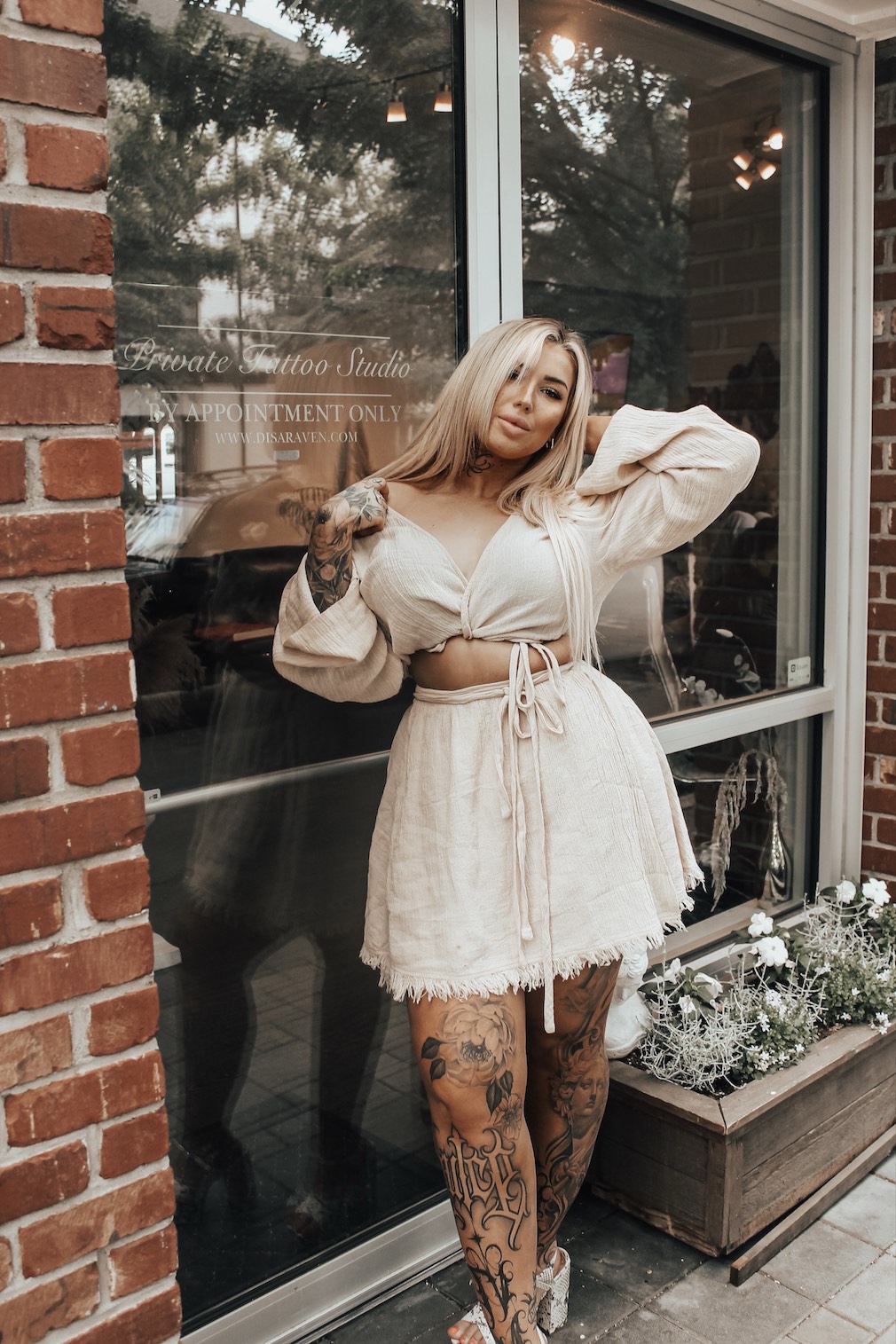 Ready for a Tattoo?

Disa Raven has three key pieces of advice for anyone contemplating getting ink done.

Don’t pick a tattoo just because it’s cute or a celebrity has the same one. Choose something meaningful to you, and never forget that it’s there for life. “Tattoos have become more common, which is awesome, and they’re more accepted, but almost in the way that people are forgetting that they’re permanent,” she said.

2. Be equally careful choosing the artist.

Take the time to do your research. “All tattoos look good in the beginning, but it’s very important to look at a tattoo artist’s healed work,” Raven said. “It’s an investment, and it’s a commitment. It’s not, how can I get tattooed the fastest possible? And by whoever’s available this week?”

3. Don’t get pressured into anything you don’t want.

The macho atmosphere in many tattoo parlours can make customers reluctant to speak up if they disagree with the direction the artwork is taking. “And then they end up getting something that they don’t really want because they felt intimidated,” said Raven. “If that’s not what you wanted, then don’t get it. You can’t take it off.” 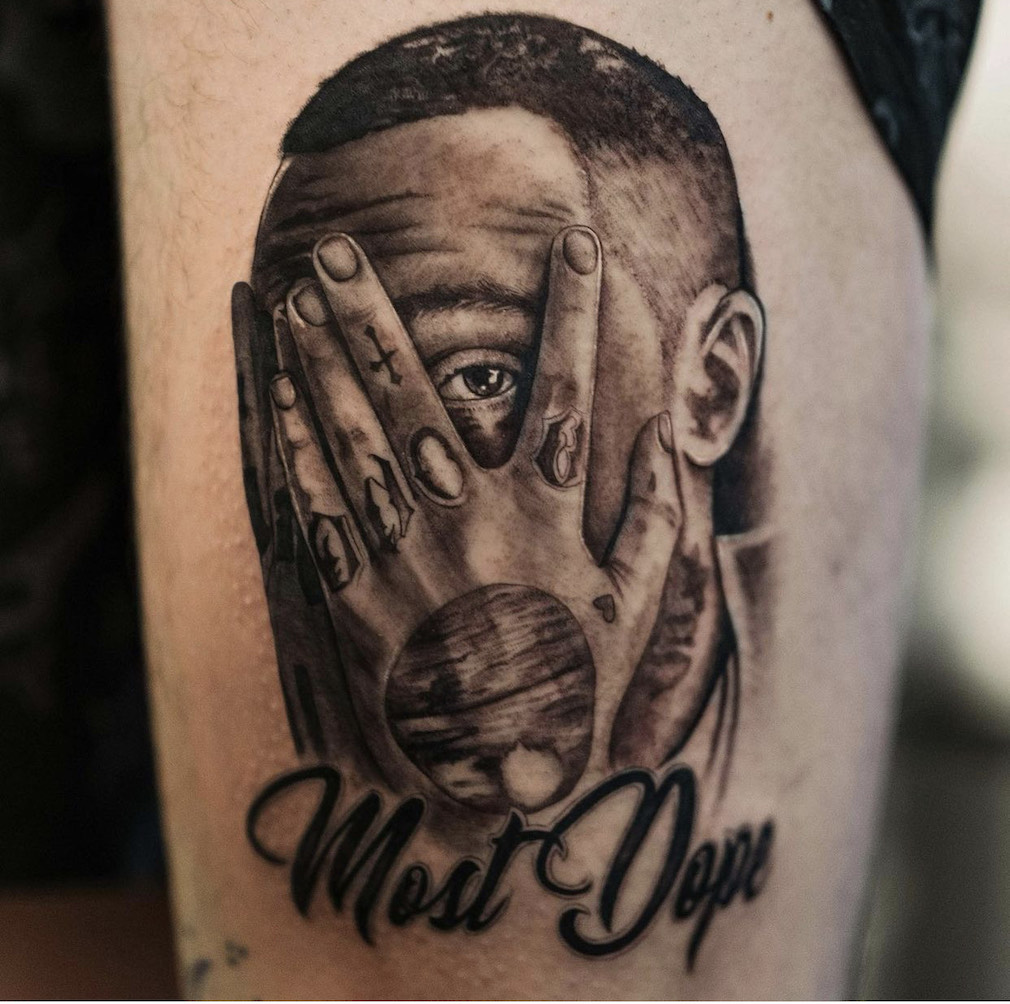