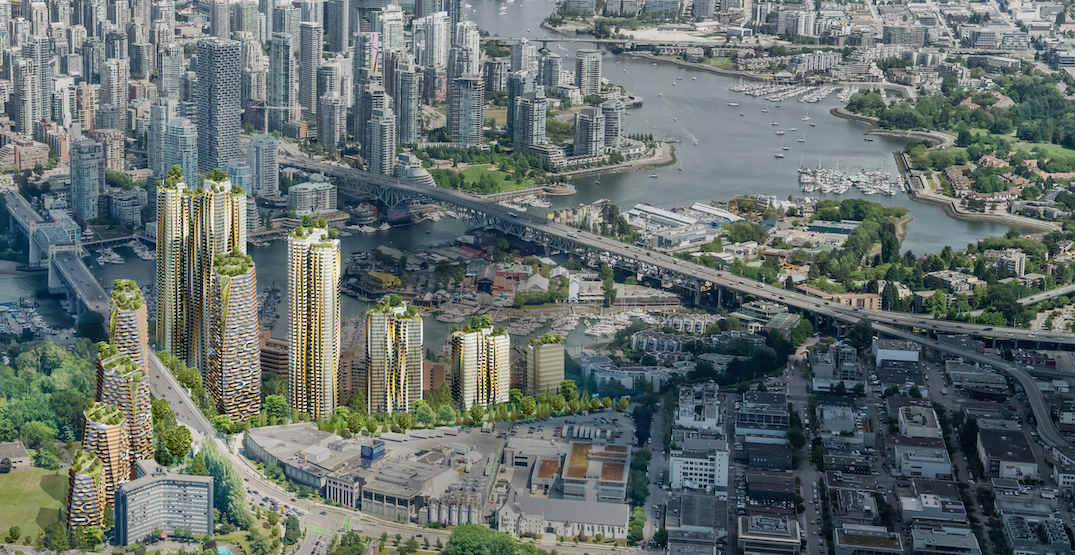 Written for Daily Hive Urbanized by Scott de Lange Boom, who is a director with Abundant Housing Vancouver, a housing advocacy group.

Vancouver has a once-in-a-generation opportunity to build a beautiful urban community on the south shore of False Creek, making serious progress towards solving our housing and climate crisis.

Built from 1976 through 1986 on reclaimed industrial land, the False Creek South (FCS) neighbourhood spans 136 acres along the south shore of False Creek between Cambie and Burrard.

Uniquely, this neighbourhood is primarily built on city-owned land — meaning every resident of Vancouver is literally an owner of the land. On behalf of us owners, the municipal government chose to lease the land to various strata and co-ops on a long-term basis. These leases are set to expire over the next decade and a half, so the city has embarked on a planning program to decide the future of the area, with a survey running until February 28.

The city leaders of the 1970s billed False Creek South as the optimal planned community, in contrast to what they erroneously saw as the mistake of allowing the West End to exist, which is consistently recognized as one of Canada’s best neighbourhoods. The promise at the time was that FCS would be a unique neighbourhood of mixed market and non-market housing that would be more affordable and inclusive than more traditionally developed areas. 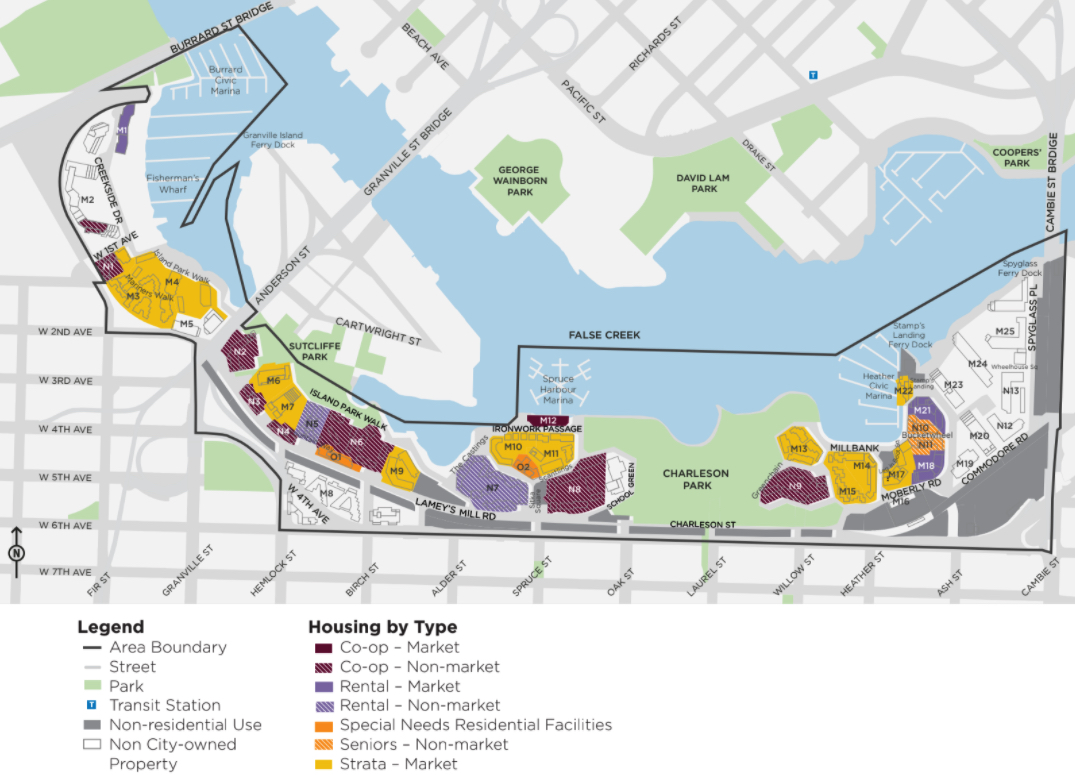 False Creek South map. Click on the image for an enlarged version of the map. (City of Vancouver)

A noble goal, but was it achieved? No. Median incomes in False Creek South are 20% higher than Vancouver overall ($78,000 vs. $65,000). What about low-income households? The proportion of low-income households in FCS is 32% lower than the city as a whole. False Creek South was advertised as a more affordable alternative to allowing the market to create housing in response to demand, but instead, it’s one of the more exclusive enclaves of the city.

On measures of racial diversity, False Creek South appears even more exclusive. Just 17% of the residents during the 2016 census were visible minorities compared to 51% for Vancouver as a whole.

What about families? Perhaps failing to meet the economic diversity goals is a worthy tradeoff if the neighbourhood can provide more for families. Unfortunately, that isn’t the case: 23% of households are families with children, compared to 33% for Vancouver as a whole. The median age in FCS is 14 years older than the city average. A community that lacks opportunity for young families and the next generation cannot be said to be a truly successful community.

Looking at the data, one can only conclude that the promise was not fulfilled. False Creek South does not appear to advance social goals relative to a typical neighbourhood, despite a significantly higher amount of taxpayer subsidies.

False Creek South is undoubtedly a pleasant area. The Seawall is one of Vancouver’s great treasures. But for such a central area, nestled between downtown and the Broadway corridor, there is surprisingly little activity.

Leg-in-Boot square, the commercial heart of the area, features a lower activity level and fewer offerings than a struggling suburban strip mall. It should be a great public space where people can meet and enjoy all the waterfront has to offer. As it stands, population density is so low that the neighbourhood can’t support a single grocery store.

While False Creek South provides an aesthetically pleasing environment for those privileged enough to live there, it is far from a complete neighbourhood that can serve the needs of a diverse range of people.

With the long-term leases expiring, Vancouver has an immense opportunity to create a neighbourhood that can meet the needs of the city now and into the future. Next door to False Creek South, the Senakw community by the Squamish Nation shows what’s possible when a government is serious about allowing housing at a scale proportionate to demand in such a central area. As it stands, this First Nation is doing more to address the housing shortage than the City of Vancouver!

Comfortably adding 9,000 new residents, Senakw will sit on a site one twelfth the size of False Creek South, which currently has around 5,000 residents. Impressively, only 10% of the Senakw land will be covered by buildings, showing that more homes doesn’t have to come at the cost of less green space.

Adding thousands of new homes will be an important contribution to addressing Vancouver’s housing shortage, stabilizing and lowering rents across the city. Vancouver would do well to follow the Squamish Nation’s example and strive for an equally ambitious plan. 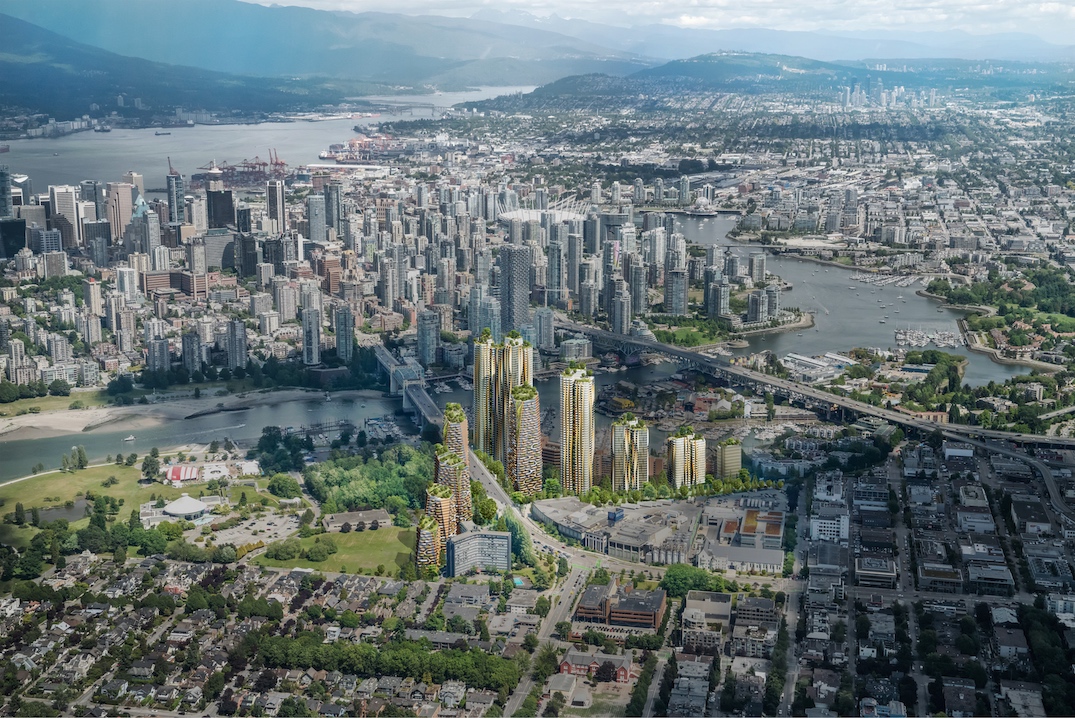 Nestled between the two largest employment centres in BC, downtown Vancouver and the Broadway corridor (which is set to grow with the new subway), False Creek South is the perfect location to add an abundance of homes within a short walk, cycle, or transit ride of jobs. The twin crises of climate change and the housing shortage require more than just talk.

Welcoming new neighbours will breathe new life into the area. With a population that can support a thriving public square and commercial area, a new Leg-in-Boot Square can become Vancouver’s next great public space, with people coming from throughout the city to enjoy waterfront cafes, dining, and other activities.

Unfortunately, Vancouver’s politicians and planners have a habit of caving to a few unrepresentative voices who cry out, “no, not in my back yard!” robbing residents of the opportunity to live in job-rich, amenity-rich central locations like False Creek South. The consequence is long commutes and artificially expensive housing.

The incredible communal resource that is the city-owned land is too valuable to waste on recreating a neighbourhood vision from half a century ago. As owners of the land, the people of Vancouver must demand better, which you can do by completing this city survey by February 28 and participating in the final engagement session on February 25.

The rebuilt False Creek South will last into the next century. Let’s create a great urban community and a legacy that our children and grandchildren in 2121 can be proud of.