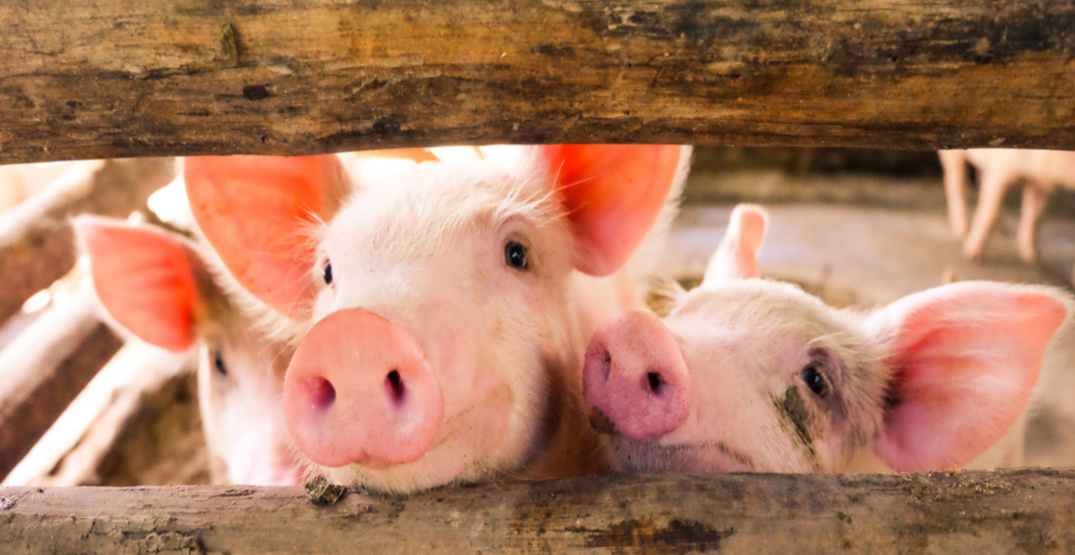 Today, the Excelsior 4 (now 3) begin their trial by jury for exposing animal cruelty at a hog farm in Abbotsford; but there is no justice in this case.

The story of the Excelsior 4 began in 2019, when dozens of animal activists documented the suffering of pigs at Excelsior Hog Farm, advocating for media cameras to be allowed on the farm. Their aim was simple: to show the public how much suffering goes into the meat products they can find neatly packaged on grocery store shelves.

Footage recorded on the farm reveals a dire situation. In it, pigs can be seen crammed in crates barely larger than their bodies, unable to turn around. Some have bloody lacerations on their ears; some sport large growths around their eyes or abdomens; some struggle to stand on badly broken legs. Nursing mother pigs are separated by restrictive bars from their babies who languish, helpless and dying, on filthy floors. Anonymous staff shock the animals with what appears to be electric prods as they shy away, squealing, or cart dead piglets out of the barn in wheelbarrows.

In other videos, activists can be seen breaking down in tears as they document the bruised and bloodied bodies and broken spirits of animals widely understood to be as capable of learning and social behaviour as beloved family dogs.

Despite the overwhelming evidence of unimaginable suffering, Excelsior Hog Farm has still faced no legal repercussions in the three years since the footage was taken. The so-called justice system has instead targeted a small group of individuals who exposed this cruelty, known as the Excelsior 4.

One of the Excelsior 4, Geoff Regier, had charges stayed in pre-trial. The remaining three, Roy Sasano, Amy Soranno, and Nick Schafer, face a combined total of fourteen serious charges. If convicted, they could be looking at years in prison.

The fact that this case has proceeded to the trial stage while the perpetrators of egregious cruelty carry on free of consequences is a tragic testament to the priorities of the justice system. It is not on the side of the hundreds of millions of blameless animals who languish in illness and injury behind closed doors only to be slaughtered by gas, knife, or electrocution. It is certainly not on the side of the people expressing compassion for these defenseless animals. No; it is on the side of the corporate interests that perpetuate such inhumane treatment for the sake of the bottom line.

If the measure of a society truly is how we treat our most vulnerable members, where does this leave us?

The system has failed spectacularly in protecting any semblance of empathy for farmed animals and the humans who have tried to help them thus far. If we are to have any sense of justice in our society, the perpetrators of cruelty must be held accountable; and those who expose it must be celebrated, not punished.