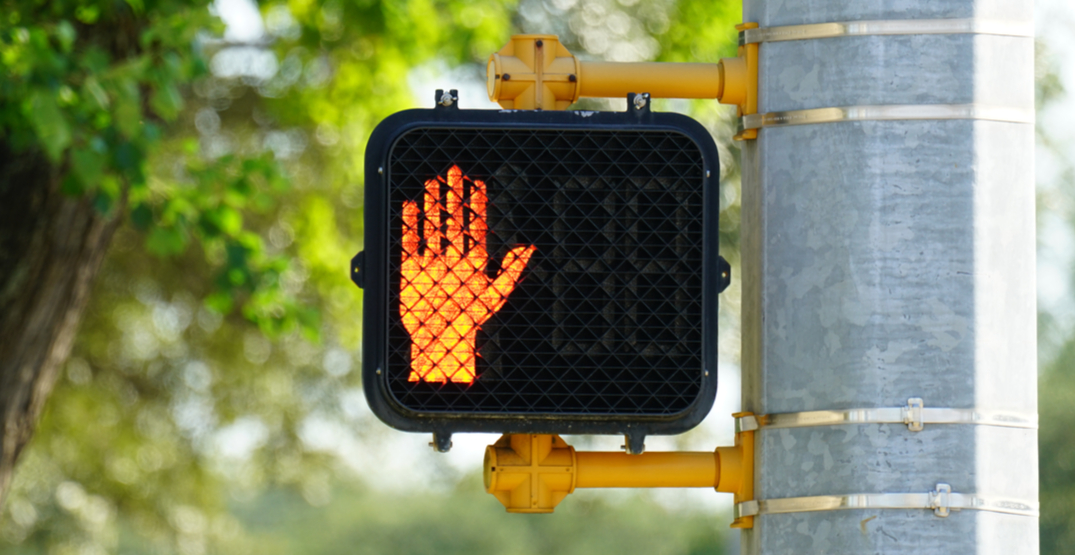 It’s a common sight and a common strategy used by countless people every single day in an effort to try and save a few seconds. But in BC, there’s a price to pay – literally – for getting caught in entering crosswalk after the red hand has already started blinking.

According to the BC Motor Vehicle Act, “when the word ‘wait,’ the words ‘don’t walk,’ or an outline of a raised hand are exhibited at an intersection or at a place other than an intersection by a pedestrian traffic control signal… a pedestrian must not enter the roadway.”

Doing so could cost you.

According to BC RCMP, fines for the infraction will run you $109. And in Vancouver, it seems more than a few people have had to learn that lesson the hard way.

Vancouver Police Const. Jason Doucette told Daily Hive that in 2017 in Vancouver alone, almost 400 tickets were issued various pedestrian infractions, including entering crosswalks late. So far this year, that number is around 90.

“The VPD is dedicated to ensuring our roads are safe for all users, including pedestrians, cyclists, and drivers,” said Doucette. “Road safety is a shared responsibility and regardless of the time of day, it’s very important that we all follow the rules.”

Doucette said the VPD has a four-person team within the Traffic Enforcement Unit that is specifically dedicated to providing education and enforcement to cyclists and pedestrians.

“These four officers are typically deployed on mountain bikes and our electric motorcycles,” he said.

The rule is not so much about fining pedestrians, as it is about keeping them safe.

“This is for the safety of all road users, including pedestrians, drivers, and cyclists,” said Doucette. “We had six fatal pedestrian collisions in 2017, and three so far in 2018.”