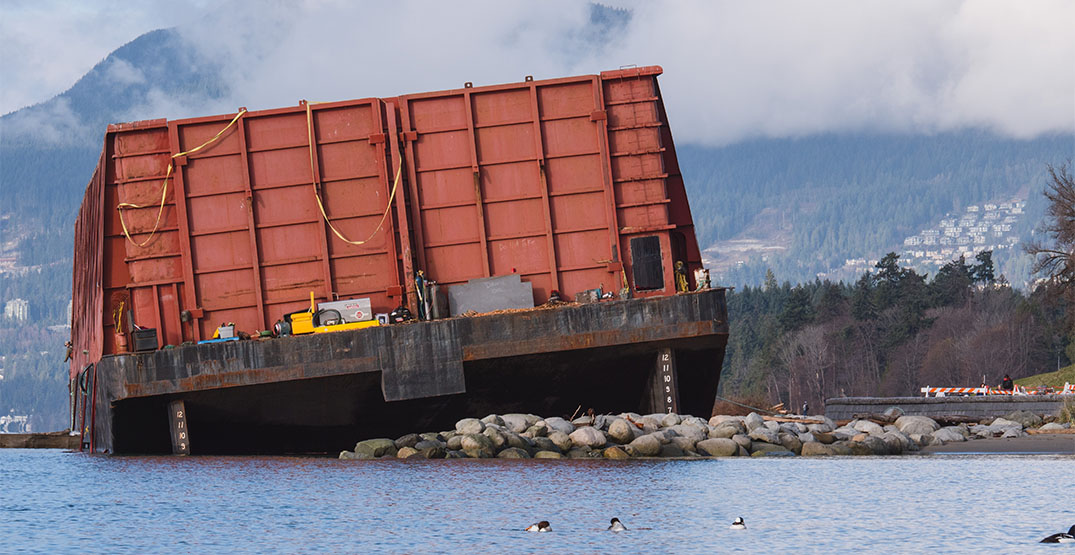 It’s the beginning of the end for Vancouver’s infamous English Bay Barge.

The City of Vancouver announced Wednesday that the much-anticipated deconstruction process will begin this week. Vancouver Pile Driving Ltd., the company in charge of taking the barge apart piece by piece, will start by installing safety barriers at Sunset Beach.

After that, the company will install temporary piles to secure the barge, and once it’s steady the deconstruction will begin. The company will remove the barge’s walls and hull in sections, and the pieces will be loaded onto supporting barges and hauled away.

Once the pieces arrive at a sorting area, they’ll be processed and recycled.

The entire process is expected to take 12 to 15 weeks, meaning the barge should be gone by summer’s end.

“The work will have minimal impact to park activities,” the City said in a news release. “The seawall will remain open during this time and there will be no impacts to traffic or parking in the area.”

News release: #EnglishBayBarge deconstruction & removal is set to begin. This week, VanPile will begin the much-anticipated process of removing the barge, starting with the installation of safety barriers and fences. Learn more ➡️ https://t.co/JKcHkd9zUv@ParkBoard #Vancouver pic.twitter.com/YvtNzZlNBy

Work on the barge is expected to take place on weekdays between 7:30 am and 5:30 pm, and noise will comply with city bylaws.

“The barge removal has been carefully planned in consultation with industry experts, partners and First Nation groups,” the City said. “Hazardous material, archeological and structural assessments have been completed to ensure the sensitive marine environment is protected.”

The barge has been stuck on the rocks at Sunset Beach for more than six months now after it blew in during a windstorm on November 15, 2021 — the same week that an atmospheric river caused devastating flooding in other parts of the province.

There were attempts to tug the barge away during high tides, but it was wedged too firmly in the rocks. In the six months, it’s been stuck at English Bay it’s been the subject of countless Instagram photos, a proposal, and been featured in The New York Times.