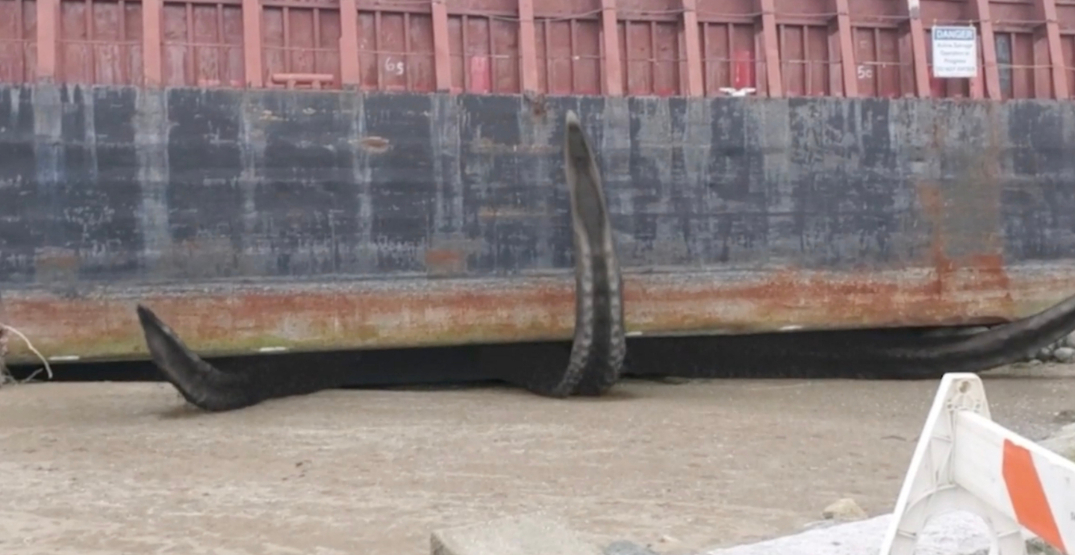 A visual effects artist from Vancouver took care of the long and arduous process of getting rid of the English Bay Barge, and they did it with the help of a frightening CGI monster.

The artist, nalvfx, whose real name is Nahuel Letizia, created a video that starts off pretty casually. It opens with red text that just says “The Barge,” and then it pans to a shot of the now-iconic big red hunk of metal.

At this point in the video, things get terrifying.

While the camera is focused on a close-up shot of the lower part of the barge, giant tentacles begin to snake out from beneath it. The camera then pans out further, and we get another shot of more tentacles shooting out of the water with a splash before grasping the huge barge like it was just a toy.

The tentacles then grip the beloved barge and slowly pull it down into the water.

Here is the shocking video:

The water continues to splash around the submersion zone before the video fades to black.

People have made references to the Seattle Kraken in the original Reddit post. One user joked that the “Kraken stole our barge. The rivalry with Seattle just got heated.”

Letizia commented that the process to create the video took about 20 days from start to finish, with eight of those days spent just rendering the final result. He would put in a couple of hours here and there after work.

In an email to Daily Hive, Letizia said he’s originally from Argentina and has been living in Vancouver for almost a year but has been in Canada for eight.

Ever since the barge appeared, he was inspired to do something about it. He would walk by the barge every day on his routine walks on the seawall.

“I’ve got to do something creative using visual effects with it,” he told himself.

He shot many videos using his phone and did a quick edit “to get a sense of the story.”

Coastal authorities do have plans for the official deconstruction of the beloved Vancouver barge, but a concrete timeline hasn’t been outlined and it doesn’t involve the assistance of a giant sea monster.