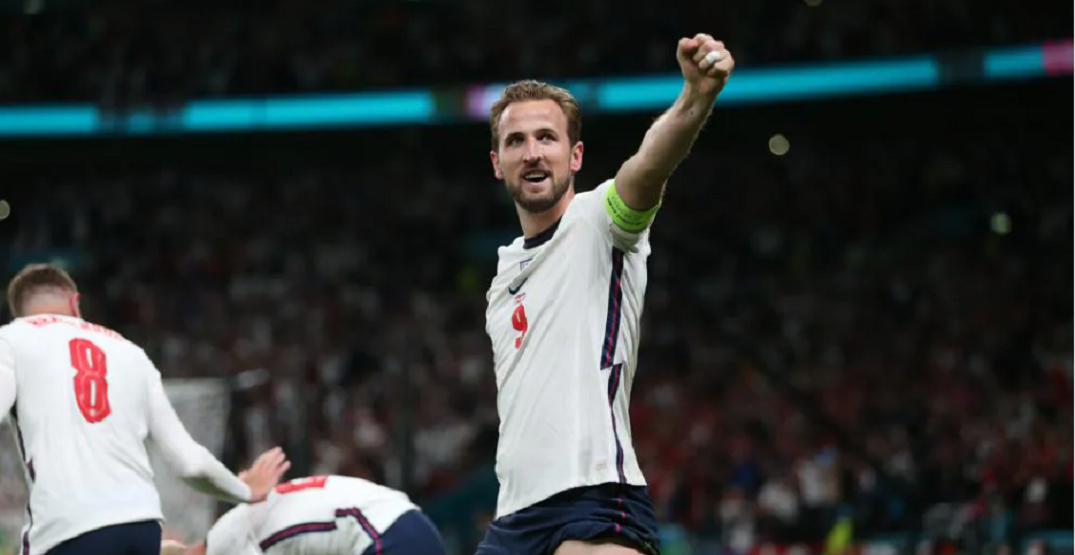 England striker Harry Kane has written his name into the international soccer history books once again.

Kasper Schmeichel stopped Kane’s penalty in the 104th minute, but the Tottenham Hotspur forward was there to collect his own rebound and redeem his miss and make the score 2-1.

Harry Kane's penalty kick is denied but he buries his own rebound to give England a 2-1 lead! #EURO2020 pic.twitter.com/pvlsxjYtNG

Manchester City striker Raheem Sterling was brought down in front of the Danish net to force the penalty.

The goal tied Harry Kane with legendary England forward Gary Lineker for most career goals at a major tournament for the country, with 10. Kane won the 2018 World Cup Golden Boot as top scorer with six goals. He has also won the Premier League Golden Boot three times in his career.

On Sunday, England advances to play Italy, who topped Spain 4-2 on penalty kicks after a 1-1 match during yesterday’s action.

Today’s match was also 1-1 heading into extra time, after a wild first 90 minutes.

In the 74th minute, Kane was taken to the ground on the edge of the 18-yard box, leading much of the Wembley crowd of over 60,000 chanting for a referee.

Video Assistant Review (VAR) ruled there was no Danish foul on the play.

Mikkel Damsgaard opened the scoring in the first half with a spectacular free-kick goal.

MIKKEL DAMSGAARD WITH ONE OF THE STRIKES OF THE TOURNAMENT! 🇩🇰

Denmark moves up 1-0 on England off a marvellous free kick! #EURO2020 pic.twitter.com/zhlxLEiz4r

Damsgaard, a winger for Italian Serie A club Sampdoria, was eventually subbed off in the 65th minute.

But later in the first-half, a Bukayo Saka pass directed at England’s Raheem Sterling forced an own goal from Danish defender Simon Kjær.

Just like that, we've got ourselves a new game as England ties things up a 1! #EURO2020 pic.twitter.com/o3H5XlEjul

The final, again taking place at Wembley, is set for Sunday at 3 pm ET/12 pm PT. The game can be watched on TSN/TSN.ca as well as on CTV and CTV.ca.