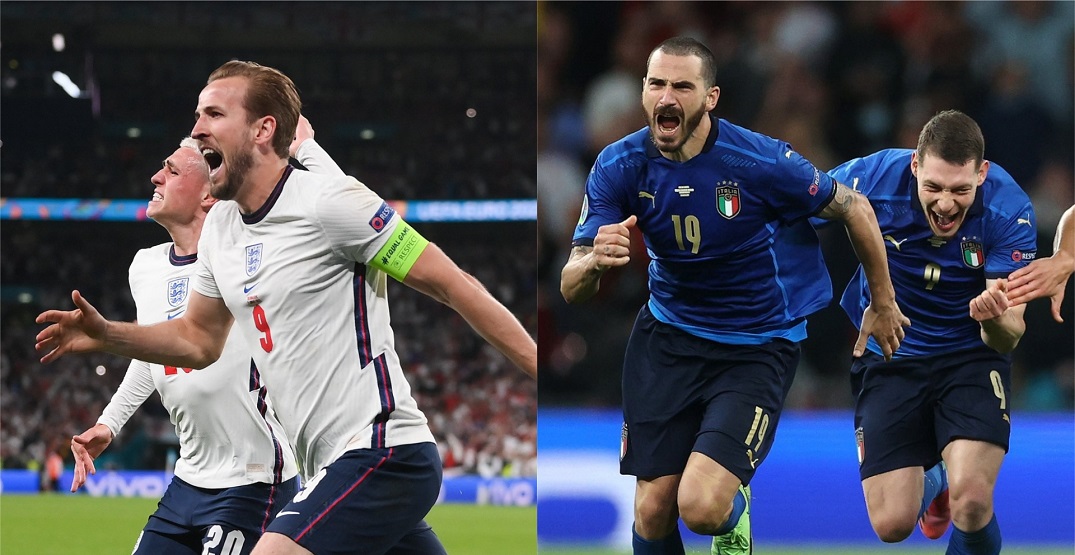 Sunday’s UEFA Euro 2020 final between England and Italy is set to be a clash for the ages.

The two international soccer superpowers will be facing off this weekend at London’s Wembley Stadium, with European bragging rights on the line for the next three years.

Haven’t been watching the tournament? Or has your team already been knocked out? Not to worry.

Here are three reasons to support either side in the final, plus a bonus reason why you might want to just cheer for a good match if you can’t decide where to throw your loyalty.

Why you should cheer for England in the Euro Final

Toronto Maple Leafs fans can identify with this one. England hasn’t won a major tournament in men’s international soccer since 1966, when they lifted the World Cup at home.

If England ends up winning at home on Sunday, you can bet the win will be immortalized all across their country for, well, pretty much ever. Raheem Sterling and Harry Kane statues seem like they’re ready to be commissioned as soon as the final whistle goes, should England win.

The song “Three Lions (Football’s Coming Home)” has been an unofficial anthem of the England national team for 25 years now. Referencing England as the supposed birthplace of the world’s most popular sport, English comedians David Baddiel and Frank Skinner teamed up with rock band Lightning Seeds back in 1996 to produce the now-iconic rally tune.

Why you should cheer for Italy in the Euro Final

In their classic blue shirts, the “Azzuri” are arguably the world’s most recognizable national side, though Brazilian fans in their yellow kits might argue with you on that one.

Though Italy’s flag colours are red, white, and green, the famous blue uniforms were first designed way back in 1911 as a nod to the House of Savoy rulers of Sicily from the 11th century.

Even if you can’t be in Italy for the match, Italian neighbourhoods in Canada’s biggest cities have had their own spontaneous celebrations as the country advanced through the tournament.

Whether you’re in Ontario’s Woodbridge or Vancouver’s Little Italy, there’s bound to be somewhere to go dancing in the streets should the Azzuri come out on top.

Even if they’ve won five World Cups and one European championship before, it’s almost never easy for the Italians on a soccer pitch. In each of their last three major tournaments where they’ve advanced to the knockout stage, they’ve gone to the shootout at least once.

They’ve gone to penalty kicks in this year’s semifinal against Spain, in the 2012 quarterfinal against England, and in the 2006 World Cup final against France. They’re 3-0 in those shootouts, so maybe they’ll find a way to pull off the most dramatic possible win once again.

You’re looking to get more into soccer

If you don’t want to cheer for anyone in particular, the final can be a great opportunity for you to learn more about where to start following these players once they return to their club teams. Find a player or two you like, and then boom! There’s your new favourite European soccer club.

Twenty-two of the 25-man England squad play in the Premier League, while 21 out of 25 Italians play in their domestic top flight Series A. Each respective season is set to kick off in August, and can be watched with a subscription to streaming service DAZN.

Sunday’s game can be watched on TSN/TSN.ca as well as on CTV and CTV.ca.