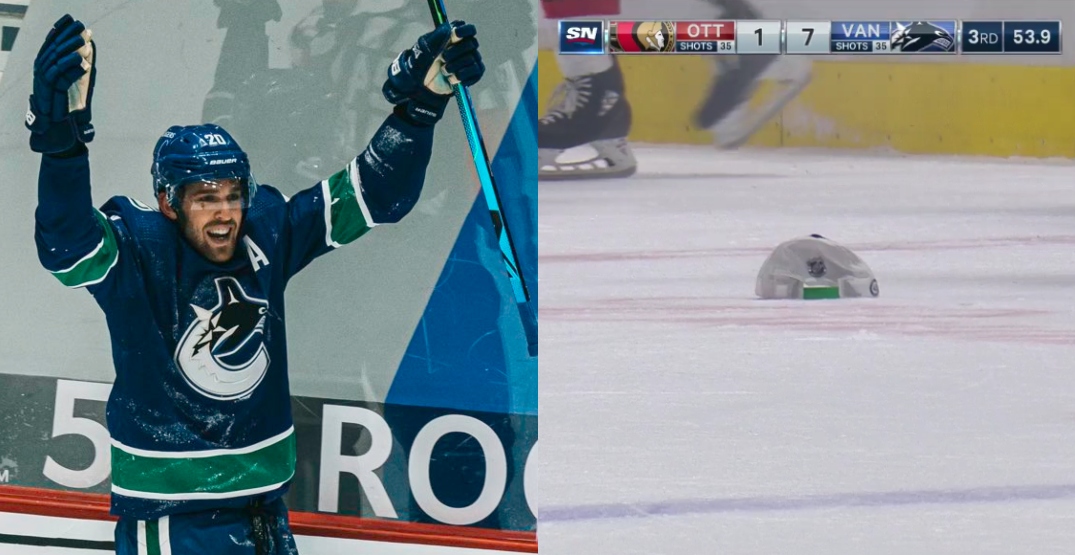 After all the talk about Elias Pettersson switching agents, Brandon Sutter’s agent might have been rubbing his hands together on Monday night.

It took him 735 games to do it, but Sutter has his first-career NHL hat trick.

The veteran Vancouver Canucks forward was moved back to centre two games ago, in an effort to provide more defensive responsibility to a team that had been leaking Grade-A scoring chances with alarming regularity.

Instead, Sutter rewarded head coach Travis Green with three goals on Monday — all of the impressive variety — to help the Canucks romp the Ottawa Senators 7-1.

During normal times, Canucks fans would have filled the ice hats. But in an empty arena during the pandemic, clearly, that’s not possible.

There was one hat tossed onto the ice on Monday, coming from goaltender Braden Holtby, who was backing up Thatcher Demko and threw his cap after Sutter’s third goal.

No fans, but we've got a hat on the ice for #Canucks' Brandon Sutter's first career hat trick 🧢🧢🧢 pic.twitter.com/A7W1MhC1Kg

It was reminiscent of the Edmonton bubble last summer when NHL employees threw hats onto the ice after Connor McDavid scored a hat trick.

“It was cool,” Sutter said of the lone hat thrown onto the ice for him.

“You never know if you’re going to get one. Only took me 13 years, and I was pretty excited.”

Fans were excited too.

Sutter….. HAT TRICK? This has to be a dream

HATS OFF IF YOU LOVE BRANDON SUTTER

HOLTBY THREW HIS HAT FOR SUTTER I 😭😭😭

Sutter has surpassed the 20-goal plateau twice in his career, but not since joining the Canucks in 2016. He’s already halfway to his goal-scoring total from last season and has matched his goal total from 2018-19.

Injuries and age have slowed him down in recent years, but after the game, he mentioned “feeling healthy” as one of the reasons why he’s playing well.