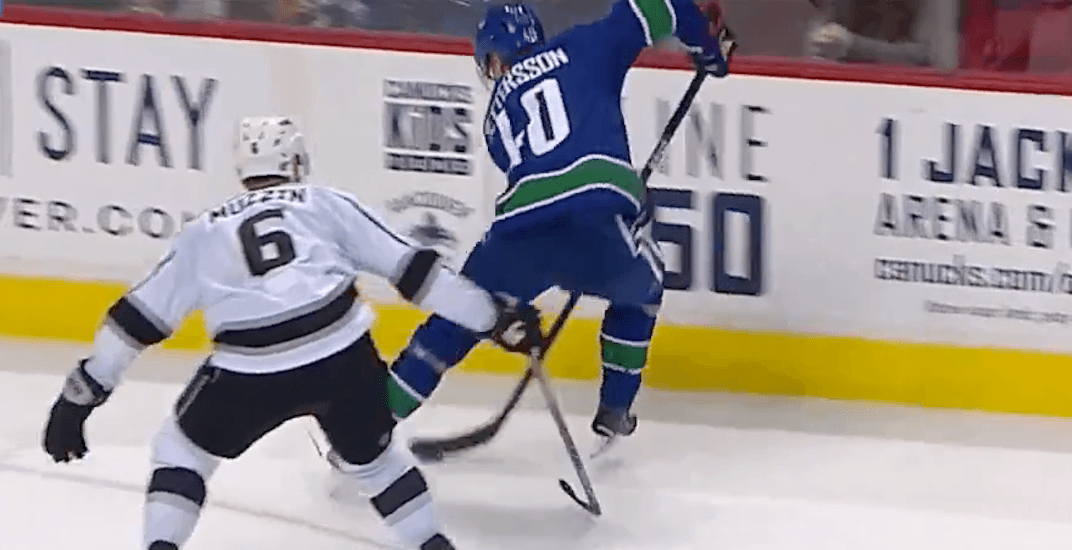 After wowing fans and media during his highly anticipated preseason debut on Tuesday, everyone wondered what Elias Pettersson would do for an encore.

The most hyped-up Canucks rookie in a long time added two more points, both power play assists, in a come-from-behind 4-3 win against the Los Angeles Kings on Thursday.

The 19-year-old’s first helper of the evening was his most impressive, making a no-look, between-the-legs pass. The puck went through his legs, as well as defenceman Jake Muzzin’s, before finding Sven Baertschi.

From there, Baertschi set up Bo Horvat, who scored the opening goal.

Pettersson took a peek over his shoulder before getting the puck, so he knew Baertschi was there:

Also notice how he seemed unfazed by a 6-foot-3, 213-pound defenceman closing in on him.

Pairing Pettersson and Brock Boeser on the same power play for the first time, it wasn’t instant magic, though it did produce. The Canucks went two-for-seven with the man advantage, including the game-tying goal from Baertschi with under five minutes left in the third period.

Pettersson picked up the second assist:

The Canucks trailed 3-1 heading into the third period, but forced overtime before eventually winning in a shootout.

Unlike his first game, Pettersson struggled in the faceoff circle, winning just two of 11 draws, though he didn’t look overmatched anywhere else.

The tests will only get more difficult for Pettersson as teams pare down their rosters as we inch closer to the regular season. The Canucks cut eight players on Friday, most of whom will start with the Utica Comets: