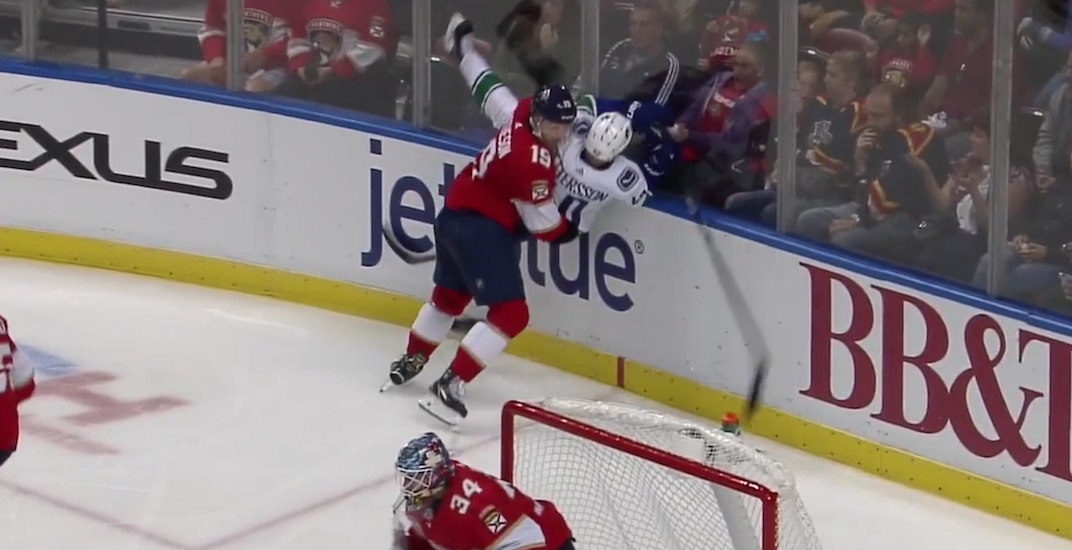 Elias Pettersson left Saturday’s Canucks game in Florida with an injury, with many fearing that it is a concussion. Pettersson was hit and subsequently thrown to the ice by Panthers defenceman Mike Matheson.

It looked like he may have hit his head on the ice.

The Canucks won the game 3-2, but the result seems secondary to the health of their prized 19-year-old rookie.

Pettersson tried to get up, but seemed woozy and lost his balance.

Daily Hive doesn’t employ any medical professionals, but Pettersson had the look of a player that just suffered a concussion. He eventually skated off under his own power, but didn’t return to the game.

The Canucks haven’t provided an update on his condition.

Pettersson has had an incredible start to his NHL career, registering at least a point in all five of Vancouver’s games so far to tie a franchise record set by Don Tannahill in 1972-73. He leads the Canucks with five goals and eight points this season, scoring on a wicked wrist shot before getting hurt against the Panthers.

Many fans on social media were furious with Matheson, as well as the lack of response by Pettersson’s teammates. Matheson outweighs Pettersson by just 17 pounds and isn’t a goon, but the Canucks should have had some form of pushback. Whether his teammates didn’t see the incident or didn’t want to get distracted in a close game, there was none.

Matheson could face supplemental discipline for the hit, depending on how the league sees it. The initial hit was clean, but his follow-through was aggressive on a player that was already off-balance.

The Canucks also lost Jay Beagle to injury in this game after he blocked a shot with his wrist.

With two centres likely out of the lineup, expect a call-up or two from Utica for the Canucks’ next game Tuesday in Pittsburgh. Adam Gaudette, who has two goals and two assists in four games with the Comets, is a good bet to get the call. Other available centres include Tanner Kero and Zack MacEwen.