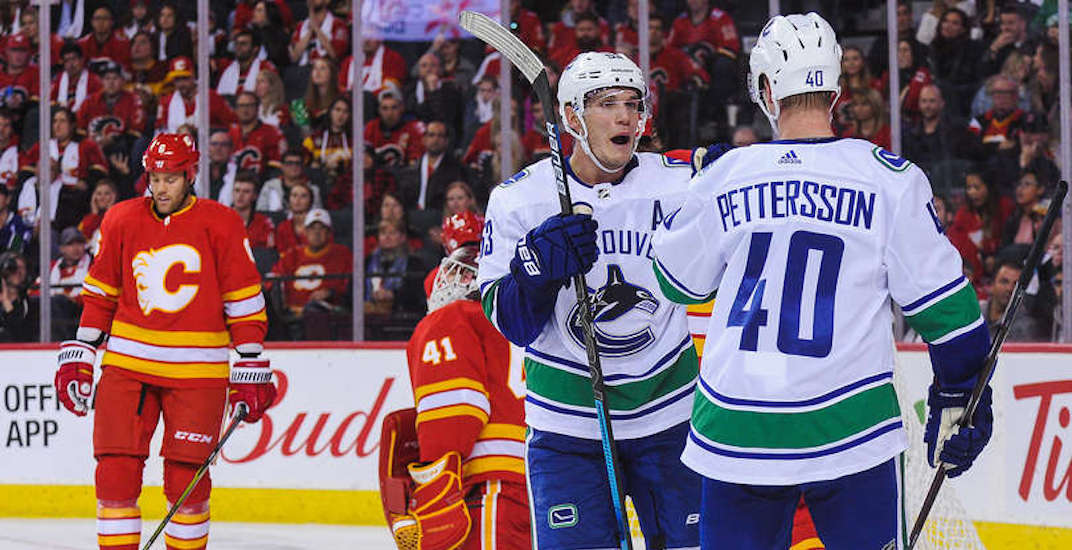 Elias Pettersson is here. He’s for real. And he’s yours. All yours.

Not only was he expected to replace Henrik Sedin in the lineup and on the power play, he was also supposed to win the Calder Trophy as a centre – a position he hardly played last season.

There’s still a long way to go, but if his first two games in the NHL are any indication, the 19-year-old is going to be a very special player.

Following a game where he lit up the highlight reel, scoring a goal and adding an assist en route to being named the game’s first star – he did even better in game No. 2.

The lanky Swede has already gained the confidence of the coach, who bumped his ice time up to 16:05 for Saturday’s game in Calgary.

Pettersson scored two goals and added an assist, but that doesn’t even come close to telling the story of his game. He drew penalties. He deked through Flames players with regularity. He had five shots on goal. He finished second on the Canucks in five-on-five Corsi-for percentage – an indication that his team controlled a majority of the play while he was on the ice.

He even won six of 10 faceoffs – an area where he’s expected to struggle this year.

Calgary scored two empty net goals to win 7-4, but it almost doesn’t even matter if you’re a Canucks fan. “How good can Pettersson be?” is going to be the running storyline this season.

Let’s check out his highlights from Saturday:

The Canucks were down 1-0 and had been outplayed for most of the first period when Pettersson scored his first goal.

Following a great shift by line of Brandon Sutter, Jake Virtanen, and Tyler Motte, Pettersson’s line kept the pressure on. Loui Eriksson and Nikolay Goldobin held possession of the puck behind the net before Pettersson got open in front.

He made no mistake:

Two for us, two for them in the opening 20. pic.twitter.com/8Pz8wYDhEd

Pettersson became just the sixth player in Canucks franchise history to score at least one goal in each of his first two career NHL games, the first since Rick Lanz in 1980.

But he wasn’t finished.

A nice passing play by Brock Boeser and Sven Baertschi nearly led to a goal by Bo Horvat on a power play rush, and had the Flames scrambling.

The puck squirted out to Alex Edler, who knew who to give the puck to:

Pettersson’s so good, we already love his parents:

Pettersson found Horvat in front for the 4-3 goal late in the second period:

The beauty of this pass was the subtlety of the deception. He had the penalty killers thinking that he would pass to the point for just a moment to open the lane for Horvat in front.

Getting on the scoresheet early has a way of instilling confidence – and Pettersson sure looked like a confident player.

There was the between the legs deke that drew a penalty:

…the between the legs pass to Goldobin:

…this gutsy play on the power play:

October 6th, 2018 will be henceforth known as Pettersson's "Day of the Dekes" #Canucks pic.twitter.com/hmV2ovtQ4W

Even as the game ended, Pettersson appeared to be teaching on the bench.

Doing video work even after the game has ended. pic.twitter.com/enNVlD3PNB

Incredible. I can’t wait to see what he does next.

Asked to talk about his game, Pettersson sounded like a seasoned vet. He downplayed his accomplishments, instead wanting to focus on the success of the team.

“The loss today, it sucks to be honest.”