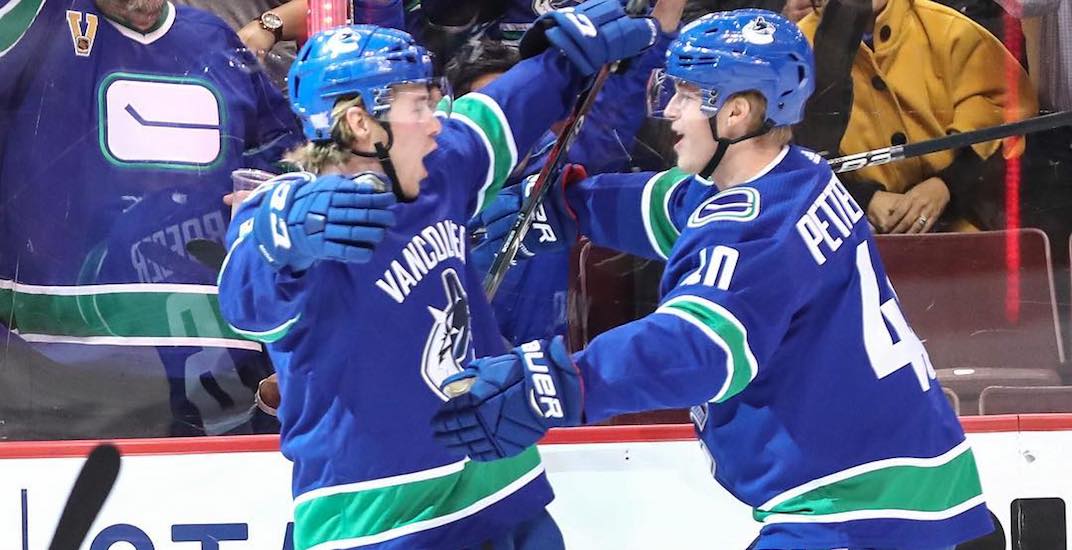 There was déjà vu in the air during the Vancouver Canucks’ thrilling 7-6 overtime win over the Colorado Avalanche on Friday night.

Fans in Vancouver haven’t had that much fun at a Canucks game since the Sedins were in their prime. You couldn’t help but be reminded of those days after the way Elias Pettersson set up Brock Boeser for his second goal of the game.

Pettersson completed a long bank pass from his own side of centre ice, getting the perfect bounce off the corner boards right to Boeser, who beat Avs goalie Philipp Grubauer to give Vancouver a 2-1 lead.

It was a play that Canucks fans had only ever seen completed by Henrik and Daniel Sedin, who invented the move.

“[Elias] is going to have to pay us! We have the copyright for that play, and you can’t just steal it,” Henrik said in interview with Sportsnet 650 on Saturday.

He was joking, of course.

“It was fun to see it again,” Henrik added. “The boards, they looked good. That’s a tough play. It was tough for us to do it at Rogers Arena because they aren’t as [lively] as we want, but they’ve changed them and it looked good.”

Henrik, like the rest of us, has been impressed with the jaw-dropping start to Elias Pettersson’s career. With two goals and three assists on Friday, including the game-tying goal in the final minute, Pettersson now has 15 points in nine games.

Quite simply, he’s dominating in a way we’ve never seen before in Vancouver.

Elias Pettersson (19 years, 355 days) is the youngest player in @Canucks history to record 5+ points in a regular-season game.

“He’s really impressive,” said Henrik. “He plays the game in a way that you can’t really compare him to other players. He can do it all. The way he sees the ice and understands the game, I think that comes from playing in the top league in Sweden last season against men.”

Fans certainly got their money’s worth on Friday, with 13 goals and seven lead changes. Three Canucks players had multi-point games, including Pettersson (5), Boeser (4), and Nikolay Goldobin (2).

Derrick Pouliot scored the game-winning goal on an overtime power play. The man advantage was earned after Pettersson (who else?) drew a slashing penalty on a breakaway.