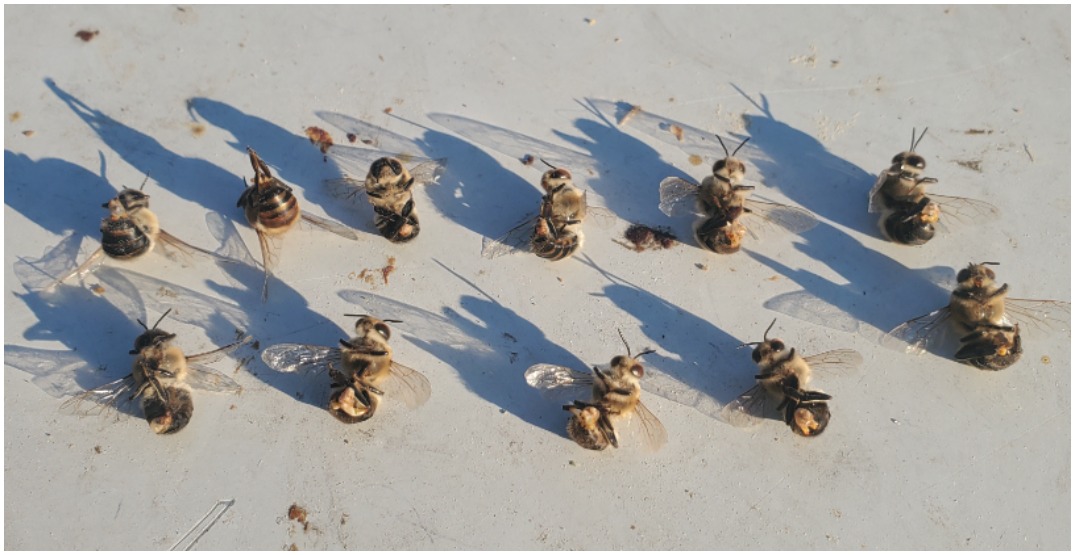 What’s black and yellow and ejaculates until it dies during heat waves? Male bees, it turns out, and scientists — disturbed as they may be — have a solution.

When the males get too hot, they convulse until they explosively ejaculate to death, and a phallus the size of their abdomen bursts from their lifeless body.

Yes, it is disgusting and upsetting.

But we can fix it, UBC experts say. 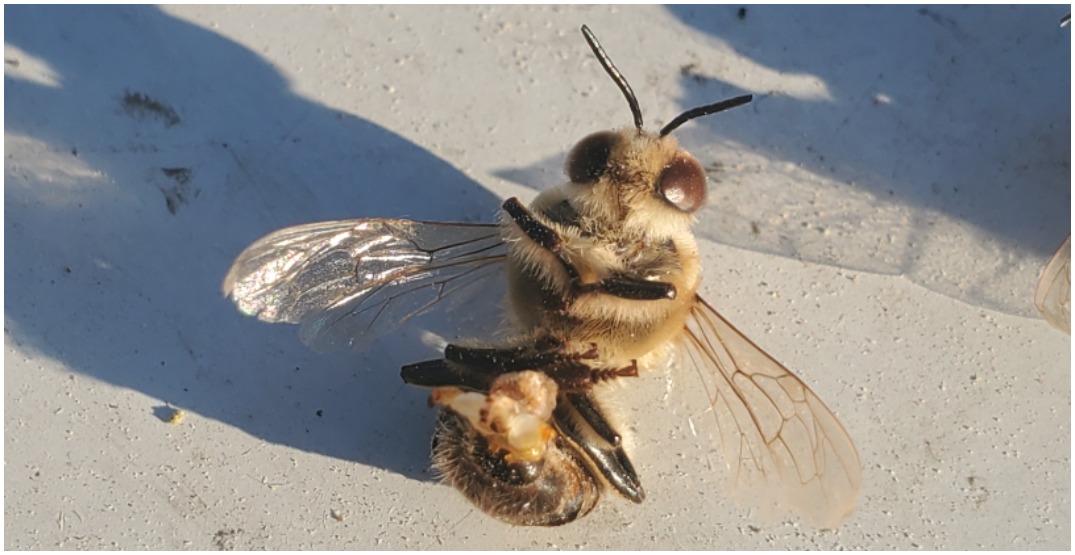 One solution is to keep the hives cool during extreme heat, perhaps by using a polystyrene cover. Dr. Alison McAfee and Emily Huxter conducted the research, with Armstrong-based beekeeper Huxter on the ground and McAfee conducting analysis remotely.

McAfee is a post-doctoral fellow at UBC and North Carolina State University. She’s a biochemist who specializes in honeybee fertility.

“We actually don’t know why that happened,” said McAfee, about the drones ejaculating post-mortem.

“What we do know is that the sole purpose of the male bees, as far as we understand so far, is to mate with a virgin queen, and they don’t really contribute to the hive in other ways. Their only job is to, when they’re sexually mature, fly and find the congregation area where all the other boys go and find the Queen and chase her in mid-air.”

They always die after they mate, but the ejection of a phallus from their abdomen is unusual. 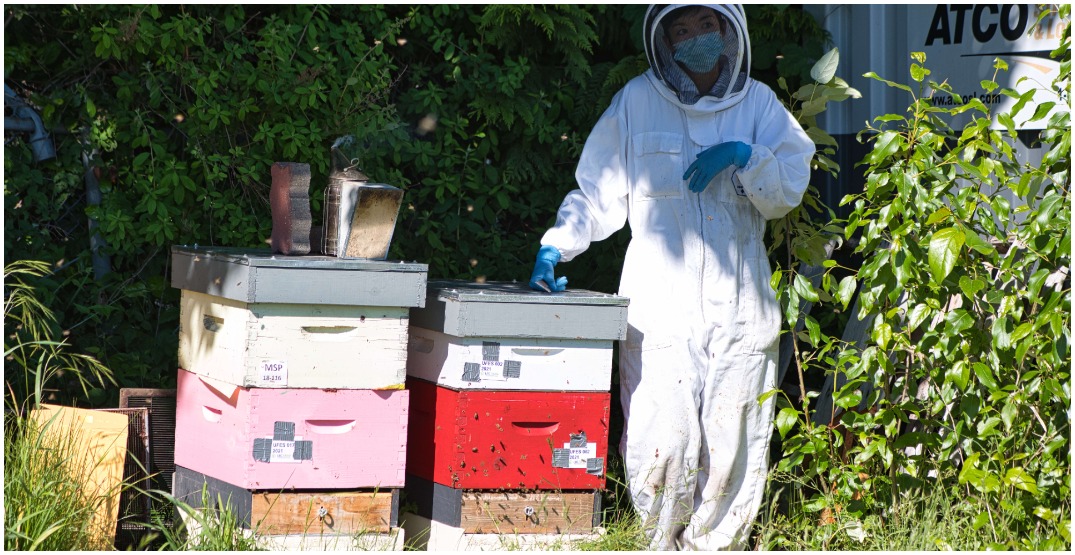 “They actually contain a whole phallus internally, and when they mate, their abdominal muscles contract very strongly. The same thing happens when they die due to stress for reasons that we don’t know, and that forces the endo-phallus to appear outside their body,” she explained.

“That’s sort of a partial version,” she continued, about the protrusion. “That’s actually only half the structure.”

When Huxter reached out to her about the project, McAfee found the drone deaths very concerning.

Their two-inch polystyrene covers cooled the hives by about four degrees — enough to keep the creatures alive, hopefully.

But McAfee worries the film won’t cool the centre of the hive, where the queen lives. That’s why she wants to give drones syrup as well as polystyrene, so they can carry liquid into the hot, dense core.

The polystyrene alone is probably enough to prevent “at least some colonies” from dying, but it’s likely to only work with the smaller ones that are easier to cool.

Scientists know that about 50% of male bees, or drones, will die after six hours at 42°C. BC got that hot this past summer, leaving a dent in local bee populations, and it could happen again in 2022. 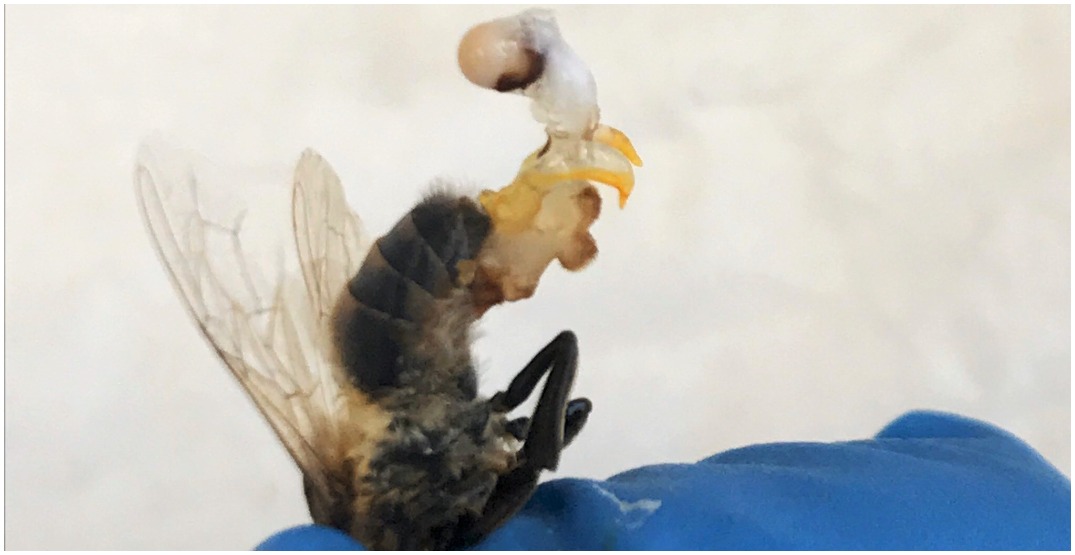 But still, McAfee says why this happened is “a total mystery.” There’s more research to be done, and she intends to carry on with her work alongside Huxter.

Eventually, she plans to look at the temperature in different parts of the colony, instead of gaging the area right under the lid.

“I’ve been studying the effects of heat on the survival and fertility of bees for a few years now, and I always thought it was more of an issue for bees that get too hot when they’re being shipped from one province or country to another because it’s a very unnatural environment,” said McAfee.

“It makes me think about other insects as well.”

Bees work in teams to keep each other alive, but solo bugs don’t have that protection.

The experiment has not been peer-reviewed, but several beekeeping experts from UBC have backed its findings.

So the drone deaths are not glamorous. But you’ve got to give it to the bees: at least they went out with a bang.