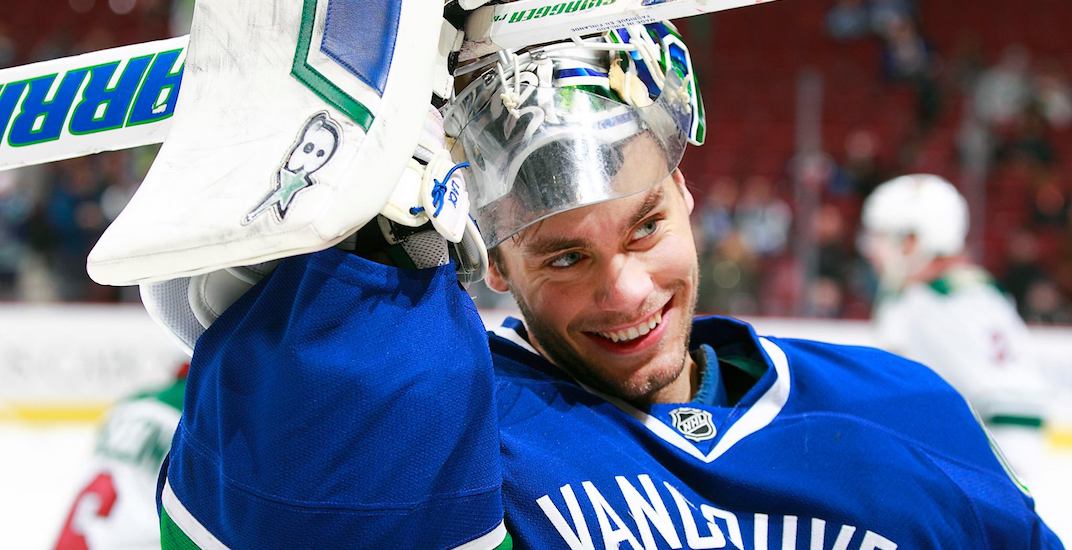 Eddie Lack wasn’t a member of the Vancouver Canucks for long — just two NHL seasons in fact — but the smiling Swedish netminder left a memorable mark.

On Monday, the 32-year-old announced his retirement from professional hockey, after taking this season off to try to get healthy.

“The body’s just not there,” Lack told Daily Hive in a phone interview from Arizona. “To be able to play professional hockey it takes such a toll.”

Lack says he rehabbed on a daily basis until Christmas, but still only feels about 85-90% of where he needs to be to play again.

“I haven’t played a lot of games in the NHL where I have not been battling something.”

One of Lack’s most fond memories from his playing career was when he won a gold medal with Sweden at the 2017 IIHF World Championships. But as the team’s third goaltender, he appeared in just one game.

He played a much bigger role during his most fond NHL memory: leading the Canucks to their last playoff appearance in 2015.

“That was such a fun experience for me,” he said.

Lack was arguably the Canucks’ MVP down the stretch, posting a .927 save percentage in 20 games after Ryan Miller was hurt on February 22. In 41 games that season, Lack posted a .921 save percentage, tying him with the recently departed Roberto Luongo.

After winning over the hearts of Canucks fans who regularly chanted his name, Lack was traded to Carolina the following offseason in a controversial deal.

“I’m not sure why we got that special bond, but somehow it kind of just happened,” Lack said of his relationship with Canucks fans. “I’m extremely grateful for what I was able to experience during my time in Vancouver. It’s definitely something that I’m going to remember and cherish for the rest of my life.”

On getting the start in the Heritage Classic

Lack was a central figure in the lead up to Luongo getting traded to Florida in 2014, through no fault of his own.

Riding a seven-game losing streak heading into the Olympic break, Eddie Lack started the first game back after the NHL resumed its schedule, which was logical given Luongo had just travelled back from Sochi.

Lack earned a 20-save shutout in a 1-0 Canucks victory, so head coach John Tortorella started him in the next game against Minnesota. The Canucks lost 2-1 in a shootout, but Lack made 22 saves, plus six of seven shots faced in the shootout.

So Tortorella started Lack in the Heritage Classic too, meaning not only would Luongo sit on the bench for a third consecutive game; the future Hall of Famer wouldn’t get to play in the marquee game at BC Place.

Luongo later requested a trade and never played for the Canucks again.

Lack recalled Tortorella telling him that he would be starting the Heritage Classic the day before the game, during a family skate at BC Place.

“The biggest thing was, like, I was really happy for myself, but seeing Lui on the ice with his kids skating around and everything, it was a very weird feeling because I felt very sad for him. That would have been a very special game for him to play.”

Torts the best NHL coach he ever had

It may surprise fans to know that Lack is among the players who really liked playing for Tortorella.

“From the coaches that I had playing in the NHL, [Tortorella] was for sure the best, and I’m not saying that [just] because I played a lot. I actually thought that he was the best when I didn’t play either. The thing that I liked about him was that he always kept you in the loop.”

When Luongo got a string of games in a row, Torts would communicate that too, Lack says.

“The nice thing was that he would always talk to you … explaining his decisions and I loved that.”

In a sport that regularly keeps all signs of personality buried beneath cliche answers, Lack stood out.

Known for his love of tacos, Lack didn’t hide his sense of humour at the rink or on Twitter.

“In Vancouver, they kind of embraced that [personality] more, and liked that I was my own [person]. I would say when I went to Carolina they kind of wanted me to be more quiet and just kind of put me back in my shell a little bit more. And I totally get that too.

“But that wasn’t me. So I tried a little bit to be more quiet and not so outspoken and outgoing and everything, but I wasn’t feeling like myself when I did that.”

“It’s weird because somehow I think that being outspoken and everything helped my career, but in some part I definitely think that it hurt it too.”

Apart from binge-watching Ozark on Netflix, Lack’s new career in real estate is keeping him busy these days.

“It’s a lot of paperwork and talking on the phone.”

It’s a natural progression for Lack, whose family owns hotels in Sweden. But not wanting to return home yet, he’s setting out to do his own thing.

“It’s for sure been an adjustment not waking up at 8:30 for morning skate and just relaxing the rest of the day. It’s actually work, but it’s been fun so far.”

The now-retired goalie is also partnering with Vancouver company Alpha North and GamerzArena on a yet-to-be announced esports project.

“We’ve got a few cool things coming up now with the tournaments… it’s going to be something that we can give back to charity,” he said. “Playing video games is definitely something that I’ve been doing my whole life just to kind of relax. I feel like now is a good time to do something about it when everyone is sitting home being bored.”

Lack says he still plans to help Arizona State University as a part-time goalie coach, as he did this season, wanting to keep one foot in the game.

“I don’t want to close that door completely,” Lack said. “This is going to sound weird but coaching and stuff doesn’t challenge me that much as a person because it’s hockey and I’ve done hockey for so long… I wanted to get into something brand new for me to really challenge myself as a person to grow.”

It time for me to RETIRE. The next 7 minutes are a tribute to All of you that were with me during this crazy ride and my way of saying – THANK YOU.