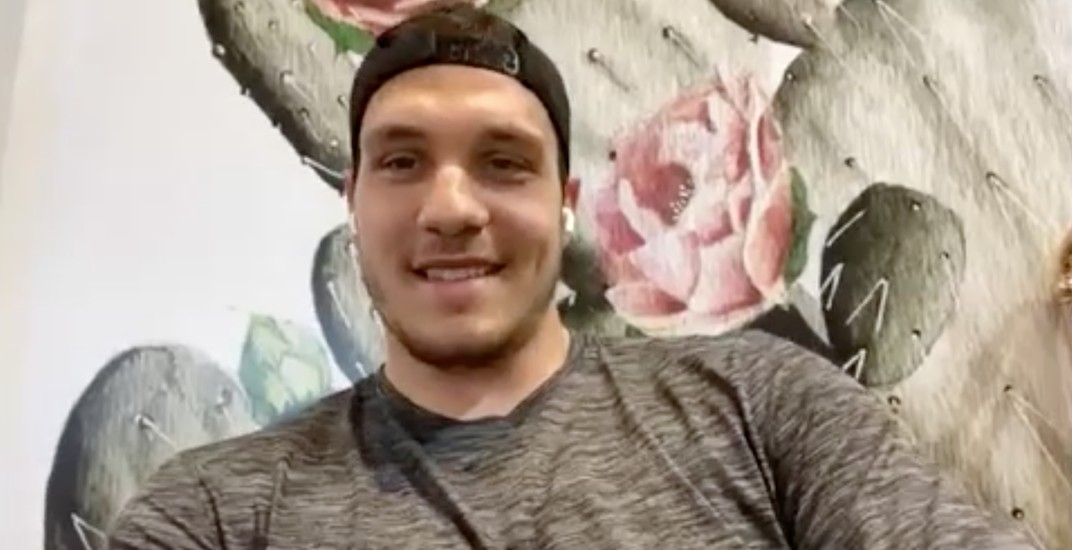 These are unusual times, so the NHL conducted an unusual media availability this morning.

"It sucks not to be playing, but it’s nice being back home. I have a full gym in my place, so I’m working out and we're all healthy." pic.twitter.com/Y79BMlETer

The players gave an update on their current statuses, 15 days after the league suspended play, with some fun questions spliced in.

Bo and his wife Holly, who is pregnant with the baby due in July, travelled back to their offseason home in Ontario.

“She’s pregnant, so we just weren’t sure what was going to happen,” Horvat said, in front of an impressive cactus mural. “We just wanted to be home just in case. That’s where she wants to have the baby.”

“It sucks not to be playing, but at the same time, being back home, it’s nice. I’ve got a full gym in my place. I get to work out a little bit. Just trying to stay healthy and hopefully, we can get back playing here soon.”

Horvat is learning a lot, preparing to become a first-time dad, but he still hasn’t mastered the art of changing a diaper.

“I’ve never changed one in my life,” said the Rodney, Ontario native. “It’s going to be interesting. My wife and I just painted the nursery last night. It’s my first time painting. It’s a little rough around the edges. Pretty much just preparing for the baby here in July.”

The funniest part of the call was when Horvat was asked which teammates he most and least wanted to be quarantined with.

He said he most wanted to be quarantined with fellow country music fan Brandon Sutter.

“Him and I are pretty close, share similar interests and stuff like that. So I’ll have to go with him.”

But he had to crack a smile when telling everyone who he would least want to be quarantined with.

“I’m going to have to go with (Jake) Virtanen. I don’t know. I always like getting under his skin and chirping him. So that’s all I’m going to say from that.”

For the record, McDavid said he would least like to be quarantined with former Canuck Zack Kassian because he has “too much energy.”

The season is on pause, but the chirps have continued through group chats, Horvat says.

“I’ve got a lot of messages on my phone coming from everywhere. A lot of chirps. A lot of joking around like we would in the locker room. Everybody’s missing the game, everyone wants to get back and play hockey as soon as possible.”

The Sedins are still helping

On the topic of how the 24-year-old has handled his first year as Canucks captain, Horvat said it wasn’t easy. But even in retirement, Henrik and Daniel Sedin continue to help.

“I’ve learned a lot. You try to see what other guys do. I’ve kind of picked Hank and Danny’s brain a little bit.

“I can’t say it’s been easy. There’s definitely that added pressure. You want to perform. You want your team to do well every single night. It’s definitely not easy but at the same time, I’m just trying to embrace it, learn as I go.”

How the NHL should restart the season

On the topic of how the NHL should restart its season if/when it’s safe to do so, Horvat has done the math.

The Canucks are currently below the playoff bar, but have played fewer games than two teams ahead of them in the standings.

“Either go by points percentage (and start the playoffs right away) or play some more regular season games,” said Horvat, knowing that if the league decides the final standings by points percentage, the Canucks would finish third in the Pacific Division.

Bo wants to either go by points percentage or play regular season games… ie. whatever it takes to get #Canucks in the playoffs pic.twitter.com/oGQZNJReGq

“To make it completely fair you’d want to play some regular season games and have more games to get in. But if we’re going to start playoffs right away then… definitely by percentage because that would put us in. It’s tough to make that call, that’s for sure.”

The Canucks had some key injuries before the league paused play, notably to Jacob Markstrom and Chris Tanev. But they would be completely healthy, with the possible exception of Micheal Ferland, if the season continues.

“It’s definitely going to help get our roster healthy… If we can put it all together and stay healthy, and play the way we know how to play, we’re going to have a lot of success going forward.

“We’re trending in the right direction. Obviously it was nice to be in the playoff hunt… and all of a sudden this kind of thing happens, which sucks. We were doing a lot of good things before this.”

Message for the fans and frontline workers

“We miss you guys, the fans, but we can’t thank the medical staff and the people on the frontlines (enough for) taking this thing head on, putting themselves at risk but also helping others that are in desperate need right now with some help.

“Hopefully we can resolve this thing quick and get back on the ice for our fans because I know they’re missing it and so are we.”