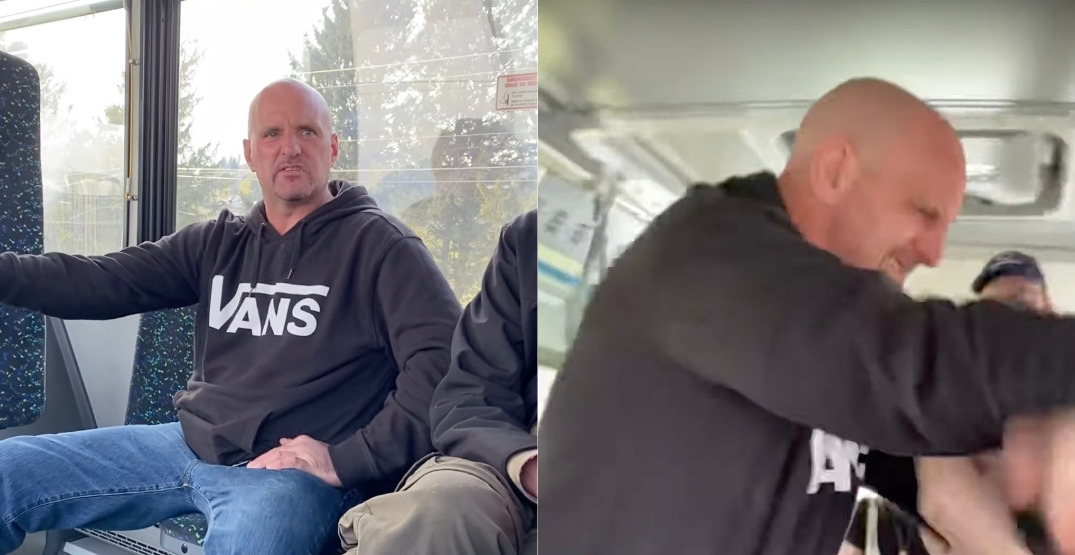 A man has been arrested and charged after the assault of four passengers on a BC Transit bus.

The Abbotsford Police Department (AbbyPD) responded to the report of a drunk and violent passenger on a BC Transit Bus that was heading westbound on Highway 1 at Whatcom Road.

While police were on the way to the incident, passengers on the BC Transit bus intervened in the assault and restrained the suspect until police were able to arrive on scene.

David Allen Lucas, 45, of Surrey has been charged with assault with a weapon and three counts of assault. He has been released from custody but is on a “series of court-ordered conditions” according to AbbyPD.

“The AbbyPD and BC Transit personnel continue to work together to ensure that the
transit system within the Abbotsford area remains safe for the public. Incidents like this
are rare. We are grateful for the actions of these citizens who intervened, likely
preventing further passengers from being injured,” said AbbyPD Constable Paul Walker in a statement.

In the video that originally made the rounds on Reddit, you can see the very-intoxicated Lucas drop several F-bombs, calling people losers and other slurs.

AbbyPD asked Daily Hive to blur the images of the other passengers, but the original video can be seen here.

Someone suggests they’re going to call the cops when Lucas says, “Go ahead, I could care less.”

He begins to utter threats to a woman, saying that if he was a chick he’d “punch her head off.”

Things escalate after around eight minutes of verbal abuse when someone near the back of the bus says something to Lucas.

“I hit goofs who have big mouths,” says Lucas, before he gets up and marches to the back of the bus, swinging wildly at a passenger.

You can then hear a male passenger instructing someone to “get on his legs” to restrain the passenger to prevent further risk of injury to others. The video then abruptly cuts off.