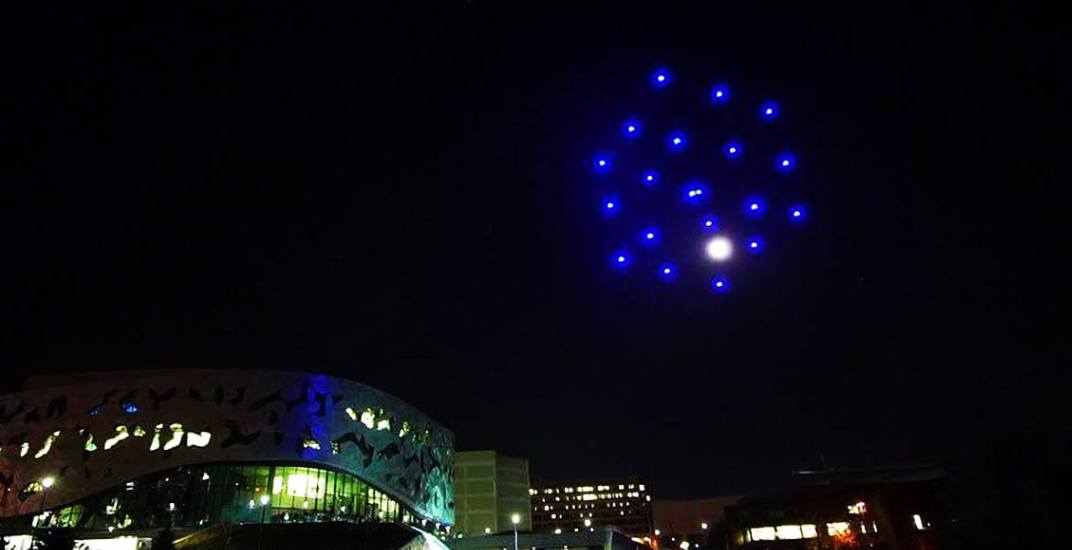 About a decade and a half ago, The Fair at the PNE ended its tradition of closing each night with a spectacular high-aerial fireworks show launched from the Sanctuary Pond.

These fireworks were replaced with a pyro musical theatrical show – complete with fireballs and some small fireworks mixed with acrobatic and dance acts – at Festival Park before it moved to the PNE Amphitheatre for a few years.

For the 2017 Fair, ‘fireworks’ have returned to the pond each night. But it’s not what you might think, as it features a swarm of 28 robot drones, each outfitted with bright LED lights, that perform a choreographed dance show over the fairground’s nighttime sky.

“It is like fireworks and you can have these flashing lights turn on and off, but you can customize it,” Zev Bertini with Arrowonics told Daily Hive. “Your ability to tell a story is further enhanced as you can control what you’re explaining.”

“This is kind of the newest technology that you can create art in the sky. The sky is our canvas and it is kind of fun to be working in a new medium where there are endless opportunities for creativity. When the drones are all in formation together, it creates a beautiful animation in the sky in a 3D space.”

BC theme for the PNE show

Arrowonics’ ‘Northern Lights’ show at this year’s Fair follows a BC theme and is synchronized to a piece of music provided by PNE organizers.

Bertini says it features much of what is incredible about this province in its natural beauty, including birds, flowers, and mountains.

Each nightly show starts at 10:15 pm and has running length of 10 minutes, which allows a safety buffer for takeoff and landing of approximately five minutes as the drones have a battery life of 15 minutes.

The shows can be seen from Festival Park and are dependent on good weather conditions – without any precipitation and high winds.

How does it work

The small Toronto-based startup, comprised largely of aerospace engineers with roots in the University of Toronto’s Institute for Aerospace Studies, has been staging public shows at major events and festivals since last November, including a number of shows at Ontario Place on the downtown Toronto waterfront.

It is the only company in Canada that designs light shows using drone technology.

Bertini says much of their work revolves around computer programming as the scale of the automation required developing in-house ground station software that can communicate with multiple drone vehicles at the same time. 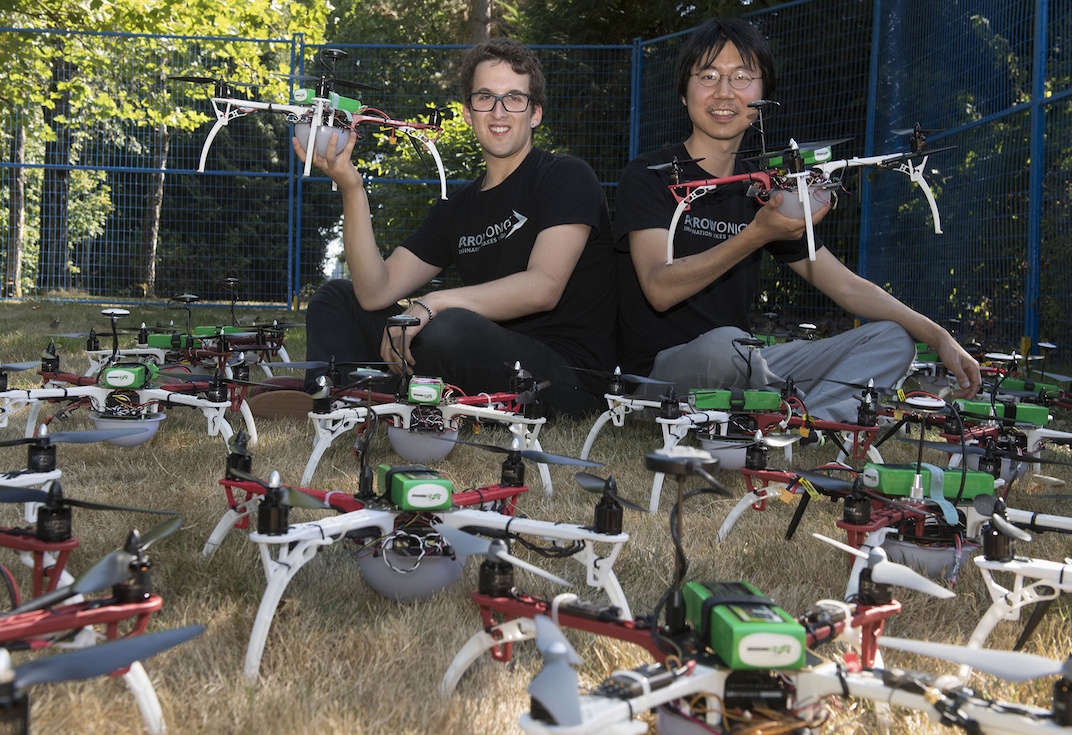 Arrownics members and their drones at The Fair at the PNE 2017. (Craig Hodge / PNE)

During the process of designing the show, the team had to scout the fairgrounds to ensure there was a large area to place the drones for takeoff and landing. A clear area is necessary so that the drones do not fly above any crowds.

But he says the biggest challenge was the years it took to overcome the Transport Canada hurdle of proving that their drone light show technology is safe and reliable.

All shows staged by Arrowonics are approved by Transport Canada.

Bertini doesn’t think drone light shows will replace fireworks, but he says the technology is only in its infancy.

The company currently has a relatively small fleet of about 80 drones, which limits the design of animations it can create in the sky.

“If you think of each drone as a pixel in the sky, then you have to think about how many pixels is going to work for certain animations,” he said. “If you want to write out a large word in the sky or several words, we don’t have enough drones. But you can do 3D shapes or fun patterns or things that move around. Everyone loves that and it’s very beautiful.”

The most high-profile application of the technology’s usage to date was during this year’s Super Bowl halftime show when 300 of Intel’s Shooting Star drones created the American flag and the logos of Intel and Pepsi behind Lady Gaga. A holiday show at Walt Disney World in 2016 also used drones, operated by Intel, for the first time.

Bertini notes that while Arrowonics does not have the same resources as the Intel team, it intends to incrementally grow its drone show size, perhaps to up to 300 drones.

When: Nightly at 10:15 pm during the Fair at the PNE until Monday, September 4 (note: the Fair is closed on Monday, August 28)

Where: Festival Park at the PNE – 2901 East Hastings Street, Vancouver

Cost: Included in Fair at the PNE admission