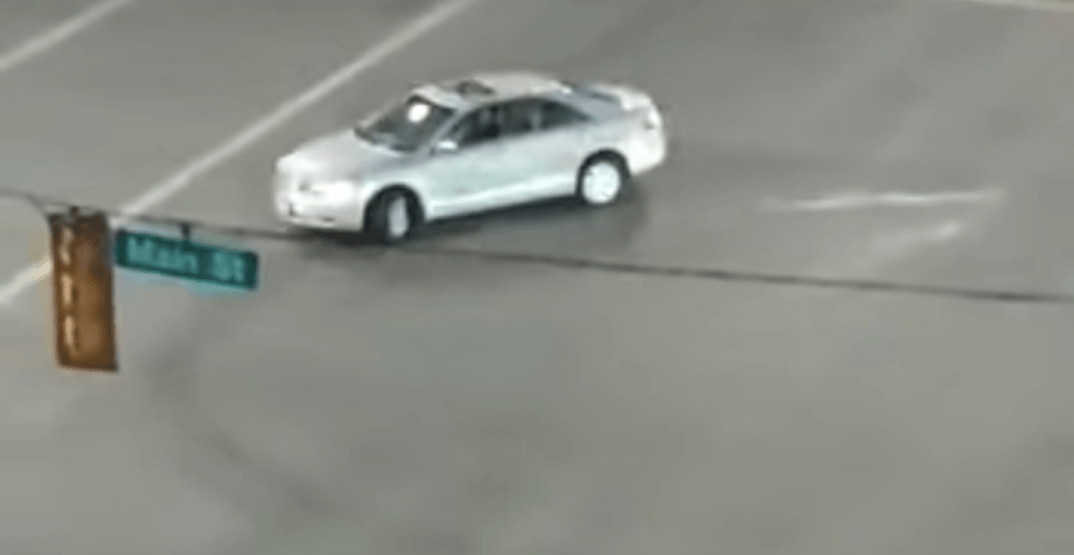 Describing it as “a bunch of commotion,” a Vancouver resident captured video of a car continuously driving in circles at one of Vancouver’s busiest intersections on Tuesday night.

Around 10 pm, Chantelle Adams was at home when she heard “a bunch of people cheering” outside her window.

Curious as to what was happening, Adams looked outside and saw what was causing all the excitement: A car, driving in around in circles right in the middle of the intersection between Main and Hastings streets.

“It was nuts,” she told Daily Hive.

Adams posted a video of the incident on social media.

After doing multiple laps, the car can then be seen driving about half a block down Hastings Street and start doing circles again.

On Wednesday morning, Vancouver Police said they had arrested an “erratic driver,” who they believed to be impaired.

“Just before 10 pm last night, officers responded to several 911 calls regarding a grey Toyota Camry driving toward pedestrians at a bus stop near West Georgia and Granville,” police said. “Witnesses also saw the Camry drive towards oncoming traffic before leaving the area.”

Police said a witness followed the vehicle, “as the driver continued to drive dangerously,” while providing continuous updates to police.

Officers were able to locate the Camry a short time later on Main Street near National Avenue, at which point they used their police vehicles to “box it in and safely prevent the driver from taking off.”

Now, police said the lone occupant of the vehicle, 37-year-old Harpreet Gill from Surrey has been charged with dangerous driving.

“Additional charges related to impaired driving are anticipated,” police said. “All vehicles involved had little to no damage, and Gill remains in custody.”