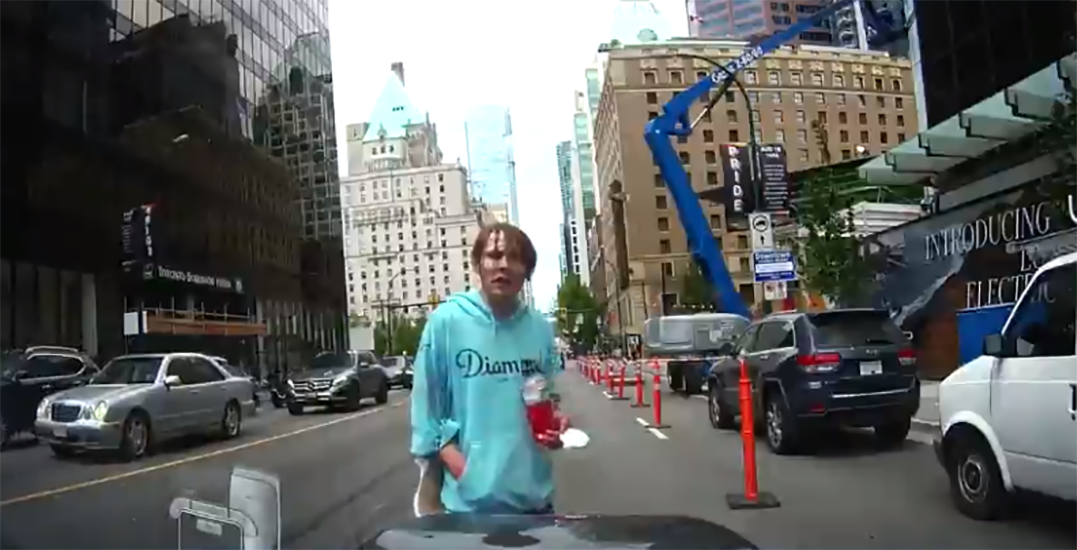 Police are investigating what they’re describing as a “violent and unprovoked assault” involving a driver and a “panhandler” in downtown Vancouver.

The incident took place on August 6 at approximately 1 pm. The driver, a 25-year-old man, was on West Georgia Street near the Vancouver Art Gallery. The Vancouver Police Department (VPD) says that the panhandler approached the front of the driver’s car, blocked it, and “started behaving erratically while asking for money.”

“The suspect stood in front of the victim’s car, gestured aggressively, then began screaming at the driver,” adds Sergeant Steve Addison in a release.

“The driver managed to manoeuvre away. That’s when the suspect allegedly hurled a bottle through the driver’s window and struck him in the head.”

Police say that the driver was injured during the incident. He called 9-1-1 and turned dash-cam footage over shortly after.

The suspect is described as a white man who was approximately 5’8″ tall with a slim build. During the incident, they wore a teal-coloured hoodie, loose-fitting jeans, and had unkempt hair.

Due to the “violent nature of the assault,” VPD is asking the public for help in identifying the suspect and has released dashcam footage of the incident.

“We are extremely concerned by the random nature of this assault, which occurred in the middle of the day on a busy downtown street,” Addison adds. “We want people to be aware of this incident, and to contact us if they can identify the suspect.”