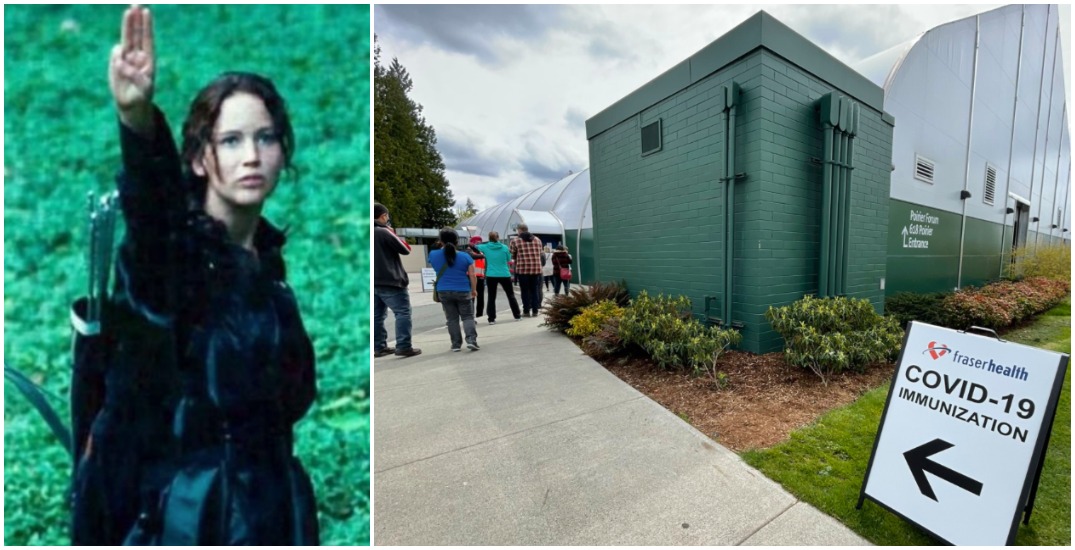 Paven Dhaliwal heard there might be a COVID-19 pop-up vaccination clinic opening near her Surrey home at Newton Athletic Park on Wednesday morning, when her sister alerted her with one word: “Run.”

“I didn’t even have time to put on socks or wash my face,” said Dhaliwal, who took off and sprinted to the site.

The 24-year-old retail worker arrived to find more than 250 people already in line, some of whom had camped out overnight in the hopes the rumours about the clinic were true.

She stood in the cold rain, shivering, until a nurse handed her a ticket and told her that everyone aged 18+ was eligible and to stay put for a chance at a vaccine.

“I’m standing here thinking: Is this real life? Is this a third-world country?” Dhaliwal told Daily Hive in a phone interview while standing in line more than four hours later waiting to hear if she’d be vaccinated.

“This is not Canada where we have to come to a park and line up like this.”

BC health officials are facing a backlash over confusion surrounding these “pop-up clinics” in Fraser Health and Vancouver Coastal Health communities this week.

There’s often no official confirmation from the health authorities that pop-up sites exist until after they open — and sometimes, in the case of Newton Athletic Park on Wednesday, not even then.

The eligible ages appear to vary, depending on the day, clinic, vaccine type, and what local health officials tell people.

Within that secrecy and confusion, rumours spread like wildfire about what might be happening and who might be eligible. Then the lineups begin, growing to massive sizes — in the case of Newton, requiring waits of more than six hours.

This was not the system described by Health Minister Adrian Dix nine days ago, when he and Dr. Bonnie Henry announced the province would redirect vaccines to 16 “high-transmission neighbourhoods” in Surrey, Port Coquitlam, South Langley Township, West Abbotsford, Squamish and Vancouver.

It was billed as a way to throw vaccine and resources at the most worrying areas, and limit that help to people based on their postal code. Nowhere in the near one-hour technical briefing with reporters was there a mention of secret vaccination sites that required anonymous messages, text chains and Twitter speculation to verify amidst a wall of silence from the health authority.

“There are hours-long lineups, people waited in line four, five or six hours and people camping out overnight because they heard rumours about unconfirmed clinics over special media.”

Bond demanded Premier John Horgan admit the pop-up clinic system is flawed and ensure people who live near the sites get priority.

“I think we could have done better in terms of communications,” Dix said Wednesday.

“We acknowledge that, and we’re working to do that.”

For Dhaliwal, her mother and sister only found out about the pop-up clinic because of a dubious and anonymous message forwarded to them in a text chain via WhatsApp.

Her family had tried to get a vaccine at the same park on Tuesday, but by the time they arrived at 11:30 am, they were told the lineup of 400 people exceeded the available vaccine.

Ironically, the WhatsApp chain was so efficient in notifying people that Dhaliwal said friends of hers from Abbotsford and Vancouver arrived to Newton Athletic Park before her and managed to get shots, even though they aren’t part of the high-transmission neighbourhoods health officials were trying to target with the pop-up site.

“The nurses were like, you are supposed to be from here but they were super lenient and lax about it and let people who weren’t from this area or Surrey get vaccinated,” she said.

In addition to the problems at Newton Athletic, there were also cases of out-of-area residents getting vaccinated at Port Coquitlam pop-up sites.

For that, Dix apologized. “It wasn’t perfect,” he said Wednesday.

But then again, thousands of people got shots, Dix added. And in the big picture, the province has hit 37% of eligible people with a first shot, and has made significant progress vaccinating those deemed clinically vulnerable.

“Overall, it was successful, though you never want to see pictures of a lot of people lining up, and we’re seeing a little bit of that in Surrey today,” he said. “But that said, we’re going to continue our best to target those communities. This is one way to do it.”

.@shirleybond up in #bcleg QP with some sharp pointed Qs to gov on why people are camping outside of “pop-up clinics” and relying on social media and rumours to access these secret clinics. Calls it “total chaos.” Demands @jjhorgan ensure ppl local to clinics get priority access.

“We are providing information about drop-in clinics as soon as we are able to,” it said in a statement to Daily Hive.

“Each day, we look at our clinics and number of appointments booked and, if we have sufficient surplus supply, then we consider doing a drop-in clinic.”

For most of Wednesday, the health authority refused to confirm publicly it was actually vaccinating people at Newton Athletic, despite a line of hundreds of people snaking around the park and health officials talking to those there.

In the absence of information from the health authority, confusion can quickly turn to fear.

Dhaliwal said there were numerous elderly people in the lineup Wednesday at Newton Athletic who should have already received shots in the province’s age-based system, but had somehow been missed. Others were openly discussing their fear of the AstraZeneca vaccine they could have received at a pharmacy but were lining up at the park for Pfizer doses instead, she said.

Priority workers, like teachers and first responders, also continue to complain that they are waiting for a dose, while secretive random pop-up clinics vaccinate people who aren’t even from those communities.

Dix said all educators and first responders in the areas of pop-up clinics have now been vaccinated and government is working on other high-priority jobs.

Some younger residents, like Kristen Kloc in Port Coquitlam who lives within an eligible postal code, are choosing not to attend a pop-up clinic in hopes it opens up a spot for frontline workers.

“This province has my name, address, phone number, email, and I’ve registered as instructed. They had a year to learn how to directly communicate with people for situations exactly like this … instead we got a whisper campaign,” she tweeted, while adding in a subsequent direct message that she only heard about her local clinic from a tweet by a journalist she follows.

Dix said overall the system is working, despite the complaints.

“The virtue of the effort is to try and focus for Fraser Health on the 10 community health service areas… to increase our level of vaccination in those areas to try and stop the spread of COVID-19,” he said.

Back in Surrey, Dhaliwal and her (now numb) bare feet emerged after a five-hour wait with a Pfizer vaccine shot. She said she appreciated at least Dix admitting government could do better on its communication.

“Dix can apologize by doing better moving forward so others don’t have to deal with what we all dealt with today,” she said.

Wednesday’s experiences in Surrey may have been frustrating for those there, but in a larger sense the government deserves praise for its vaccine efforts, said Judy Illes, a professor of neurology and Canada Research Chair in Neuroethics at the University of B.C., who is an expert in vaccine ethics.

“I think we should be appreciating the efforts of the minister to inventively come up with a pop-up vaccine clinic and use social media to get the word out as best as possible,” she said, adding “there is no playbook” for government to draw upon in responding to the crisis.

“This is a tough crisis. We’ve been in it for a year and a half, we’re all tired. I think the more inventiveness we can help put in place, and the more we can follow public health guidelines, the better. It’s not going to be perfect, because we haven’t been here before.”