US President Donald Trump was deemed mentally fit yesterday, after passing a cognitive test designed by a Canadian doctor.

The exam, known as the Montreal Cognitive Assessment (MoCA), was created by Canadian neurologist Ziad Nasreddine, who emigrated to Canada from Lebanon in 1983.

MoCA is a quick, simple assessment used to detect early signs of Alzheimer’s disease or other cognitive issues. The test has been used by medical professionals all over the world and has been translated into over 100 languages.

Trump took the test after his mental fitness to run the US has increasingly been brought into question.

Last week a number of American mental health professionals sent a letter to the President’s official physician, Dr. Ronny Jackson, to express their concern with Trump’s mental fitness. The doctors requested that Trump take a test to measure his cognitive abilities.

Over the past several weeks, Trump has taken to Twitter to express that his mental abilities are fine and well.

….Actually, throughout my life, my two greatest assets have been mental stability and being, like, really smart. Crooked Hillary Clinton also played these cards very hard and, as everyone knows, went down in flames. I went from VERY successful businessman, to top T.V. Star…..

….to President of the United States (on my first try). I think that would qualify as not smart, but genius….and a very stable genius at that!

On January 6, Trump tweeted that he “would qualify as not smart, but a genius.”

Trump had a general physical examination on January 12 and the results of the tests were announced yesterday by Dr. Jackson.

According to Jackson, he had no initial intention of including the cognitive assessment in the overall physical exam but Trump insisted that his mental fitness should be tested.

“He came to me and said ‘Is there something we can do? A test or some kind of screening we can do to test my cognitive ability?'” explained Jackson, in a White House press conference on Tuesday.

Jackson said he looked at a number cognitive tests and chose the MoCA.

“We picked one of the (tests) that was a little more involved. It was longer, it was the more difficult one of all of them. It took significantly longer to complete but the President did exceedingly well on it,” said Jackson.

The one-page test is made up of eight parts that test one’s visuospatial abilities, memory, language, and orientation. The test is scored out of a possible 30 points. The average score is 26, but Trump aced it with a perfect 30. 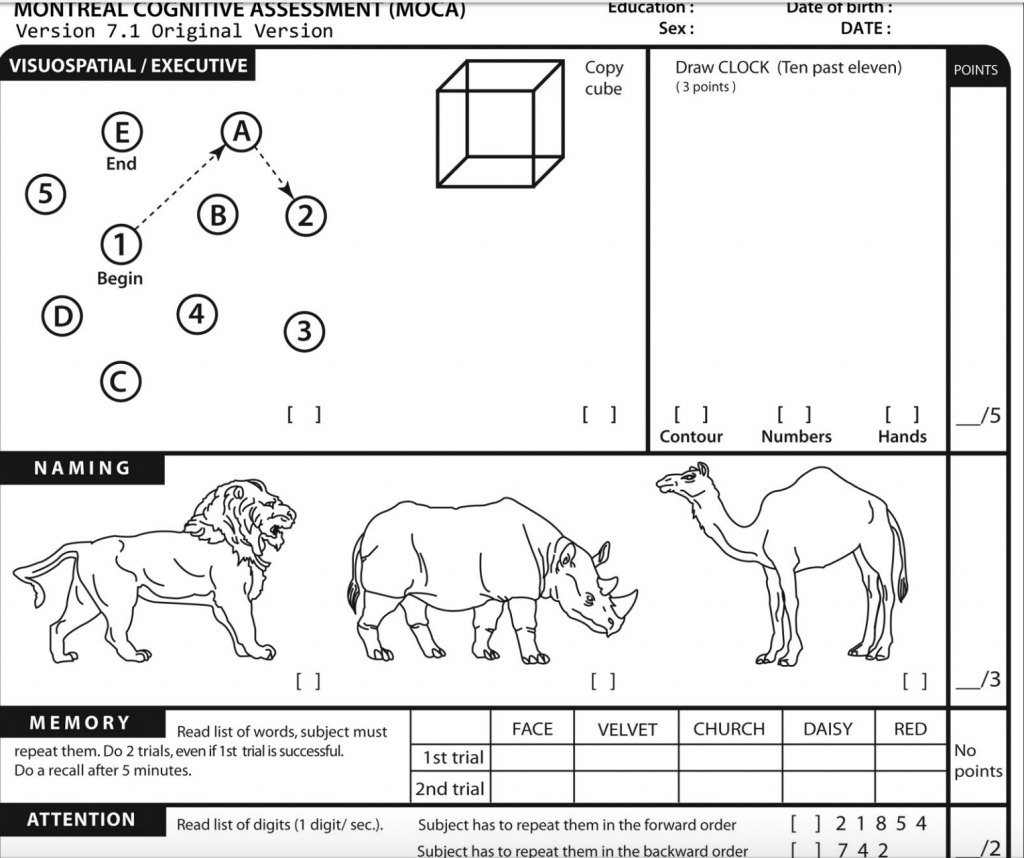 The Montreal Cognitive Assessment is made up of several short sections

Nasreddine reportedly did not know Trump was going to take his test. However, he told reporters that he was “very honoured” that the test was chosen by the White House.

Nasreddine developed the MoCA in 1996 while he was working at the Charles LeMoyne Hospital in Montreal.

Nasreddine currently works as the director of the MoCA Clinic and Institute located in the Montreal area.