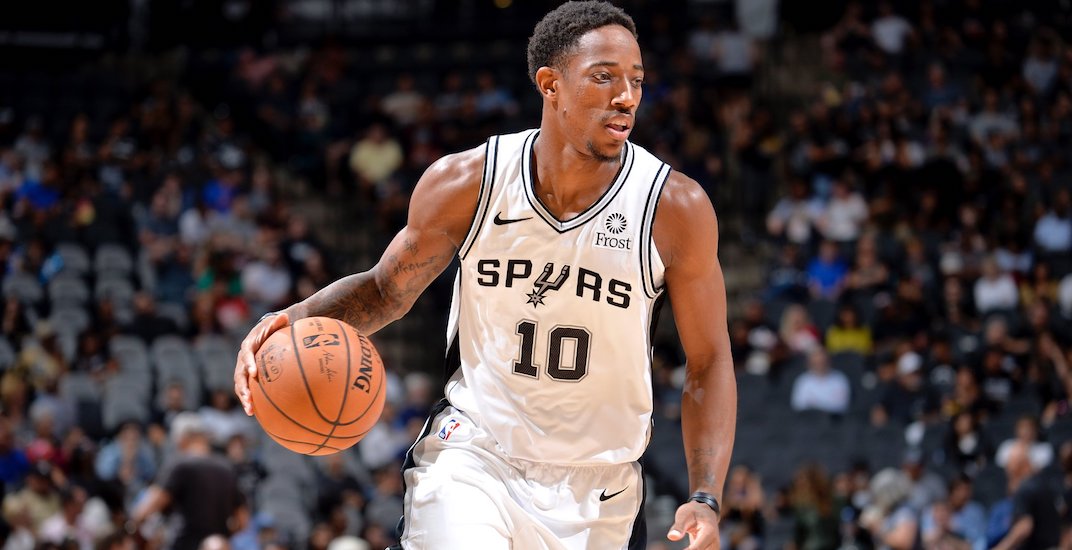 Sometimes it’s nice to know that your ex is doing well.

After an emotionally-challenging offseason, DeMar DeRozan is playing the best basketball of his career with the San Antonio Spurs.

Despite playing for a team that came into the season with low expectations, DeRozan has led the Spurs to an impressive start at 6-3, sitting fourth in the Western Conference standings above the likes of the Houston Rockets, Utah Jazz, Los Angeles Lakers, and Oklahoma City Thunder.

“[The Spurs are getting] a guy that’s been proven to prove himself time and time again,” DeRozan told ESPN this summer, adding that he now has a bigger chip on his shoulder than ever before.

So far, he’s living up to those words.

The former Raptors star has cemented his status as the Spurs’ primary option and best player. He even managed to set new franchise record, scoring 136 points through his first five games, more than any new Spur in franchise history.

The Spurs' bench was so ready for @DeMar_DeRozan's tomahawk slam! 😂 pic.twitter.com/frgph0NBaU

Though the Spurs have played just nine games, DeRozan’s numbers are better than ever. The 10-year veteran is currently equalling his highest points-per-game average (27.3), and is doing it more efficiently than ever before in his career: 51.6% from the field, 89.3% from the free-throw line, and an eFG% (efficient field goal percentage) of 52.7%.

“He’s a really good player, and he loves those moments,” Spurs head coach Gregg Popovich told reporters after his team’s 113-108 overtime victory over the Dallas Mavericks last week. “You know, Michael [Jordan] didn’t make every shot at the end of the game, but there are very few people who want to be in that position all the time, and he’s one of those people that loves it.”

DeRozan played 43 minutes and scored 34 points in that game, and was clutch in overtime.

But his success hasn’t only come from his shooting.

So while the 10-1 Raptors haven’t missed him, DeRozan might not miss his old team either.