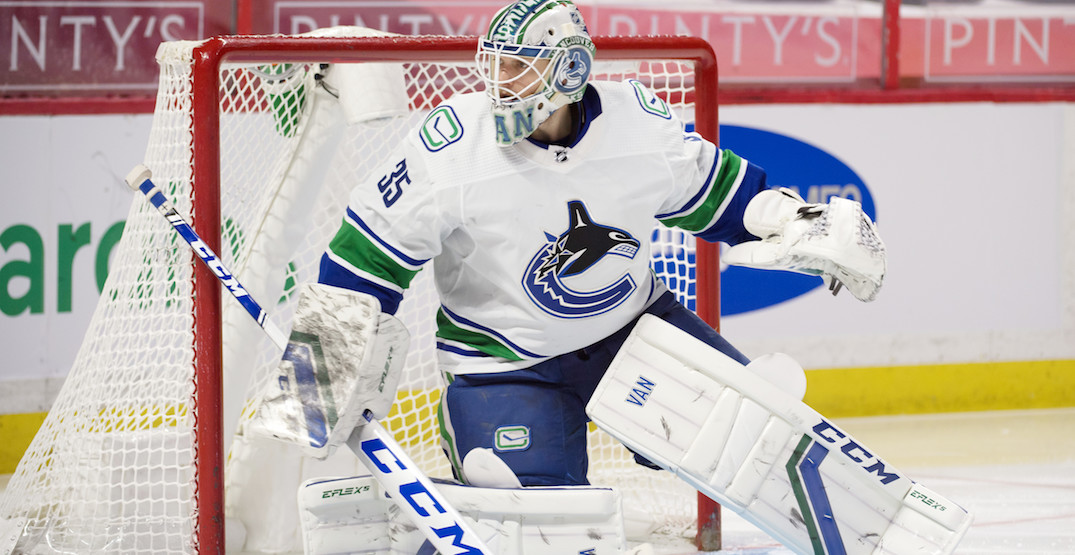 All season, Michael DiPietro has been sitting and waiting for his chance to play.

In a normal year, the 21-year-old Vancouver Canucks prospect would have played heavy minutes as the Utica Comets’ No. 1 goalie. When and if an injury hit a goalie in Vancouver, DiPietro would quickly be called up.

There’s nothing normal about this season, of course. Aside from backing up Braden Holtby in the first game back after the COVID outbreak, DiPietro had spent the season on the Canucks taxi squad. He’s been practicing and learning from goaltending coach Ian Clark, but DiPietro hasn’t played a competitive game in 411 days.

The Canucks finally sent DiPietro to the Utica Comets yesterday, which will allow him to play meaningful minutes. But of course, less than 24 hours later, the first injury to a Canucks goaltender occurred.

Thatcher Demko is banged up, so Holtby will get the start tonight in Ottawa, with the veteran in search of his fourth-straight victory in net. The backup will be Arturs Silovs, the Canucks’ sixth-round draft pick in 2019, who will be suiting up for an NHL game for the first time.

Silovs has also done a lot of sitting and waiting this season. The 20-year-old Latvian was loaned to the Manitoba Moose, but appeared in just one game for them. Prior to the start of the NHL season, he was loaned to two teams in his native country, appearing in two games for HS Riga and four games for HK Mogo.

Demko “should be back soon,” according to Rick Dhaliwal of CHEK TV, so that’s a good sign.

Early word on Demko injury is that it is not serious, should be back soon.

It’s Murphy’s Law for the Canucks, who had kept DiPietro around as insurance for precisely this type of situation. As long as Demko isn’t out for an extended period of time, Holtby should start every game anyway, though the schedule is about to get really tough.

After a pair of games against the Senators tonight and Wednesday, the Canucks will face the Toronto Maple Leafs on the second half of a back-to-back situation on Thursday. Saturday’s game in Toronto will be their third game in four nights, and they’ve got another back-to-back scenario on Monday and Tuesday against the Edmonton Oilers.

“We’ve got a lot of games in a short amount of nights. We’re going to need both goalies to be on top of their game, and Holts has been very solid the last three starts here and looking like he’s right on top of his game.”

The Canucks are eight points back of the Montreal Canadiens for the final playoff spot in the North Division, with five games in hand on the Habs.