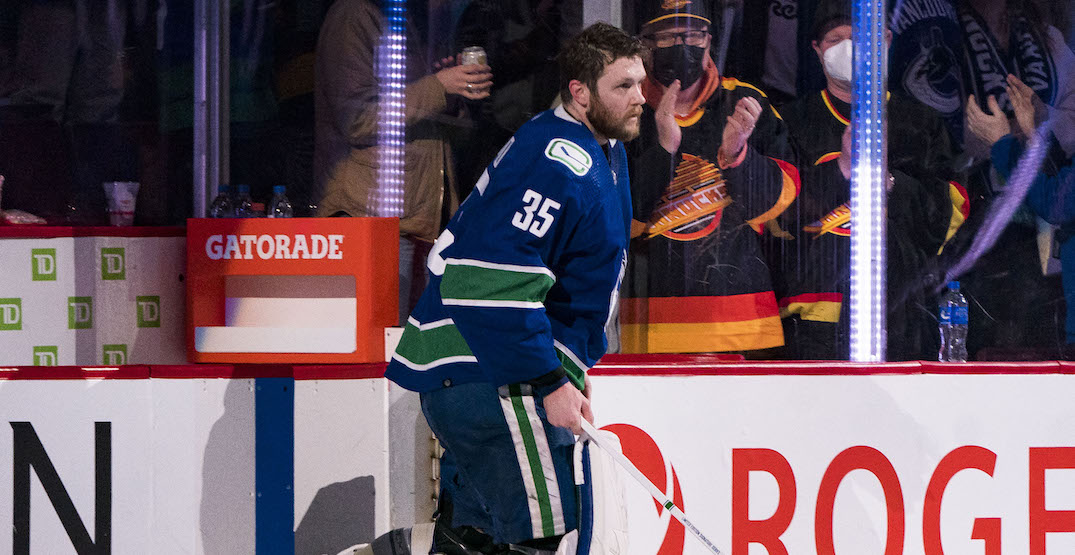 The Toronto Maple Leafs are in Seattle tonight, and they’re happy about that because Thatcher Demko doesn’t play for the Kraken.

No, Demko is most certainly a Vancouver Canuck.

The Leafs found that out the hard way, as they left town on Saturday shaking their heads, and probably a collective middle finger, at Demko, after outshooting the Canucks 53-24, and yet falling 3-2 at Rogers Arena.

Demko was that good, in fact, never better in his time in the National Hockey League, stopping a career-high 51 shots, and allowing only Auston Matthews and Ondrej Kase to beat him on second period power plays.

Demko continues to turn in Vezina-calibre performances for the Canucks, despite having his rhythm interrupted by a brief spell in COVID protocol a couple of weeks back. The Canucks’ MVP is 4-1-1 in his last six starts, but the win-loss record doesn’t really tell the story.

Demko has given up just four goals at 5-on-5 in his last six starts — three in one game in Nashville, and one against Arizona in the first game out of the All-Star break. Otherwise, he gave up a pair of power play goals in Washington, and another with the man-advantage in Nashville in mid-January.

Then he entered protocol, but reemerged with a stellar showing in a 1-0 overtime loss in Calgary. That was three straight games without allowing a 5-on-5 goal. He gave up three of them in a 4-2 loss in a second trip to Nashville just before his appearance at the All-Star weekend in Vegas, then one even-strength goal-against Arizona.

On Saturday, Demko was dialled in, as the Leafs came at him in waves, and he was up to the task all night long.

The Canucks are paying this guy $2.5 million this season — that’s his take home pay — in the first year of a five-year contract worth a total of $25 million.

Demko is tied with five other goalies for the 13th-highest cap hit (CapFriendly.com)

The team is getting elite netminding from a 26-year-old entering the prime of his career, and they’re getting it for $2.5 million, with a cap hit of $5 million.

The cap hit is tied for 13th among NHL netminders this season, and there is no way there are 12 goalies playing better than Demko this season. Incredibly, the actual salary puts Demko in a tie for 33rd among his goaltending brethren.

The contract tops out with Demko being paid out $7 million two seasons from now, and somehow even that projects to be a remarkable bargain.

Given the performance level on an almost nightly basis, and what Demko means to this hockey club, the $2.5 million he’s making this season – and the return the team is getting on that investment right now – has to be in the discussion of the best bang-for-the-buck salaries in franchise history.

On Saturday night, we witnessed one of the best goaltending performances in the 52-year history of the Canucks.

Based on that outing and the result it yielded against, of all teams, the Toronto Maple Leafs — I know the segment is the Patdown today, but my goodness it’s pretty clear when it comes to Demko, that price is right.