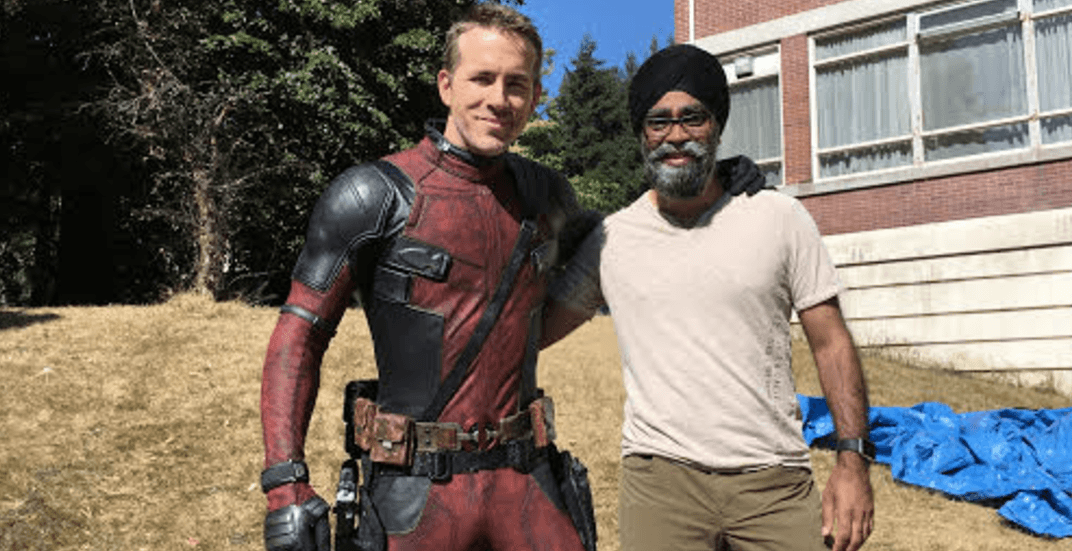 This is one badass picture.

Defense Minister Harjit Sajjan was in Vancouver today and decided to pay a visit to Ryan Reynolds on the set of Deadpool 2.

Great to catch up with fellow Vancouverite, @VancityReynolds, on the set of @deadpoolmovie this morning. (1/3) pic.twitter.com/w5BbLYPFWd

Sajjan also went on to Tweet about how Vancouver is a leading city for filming in North America.

Thanks to productions like @deadpoolmovie, #Vancouver is the 3rd largest film and TV production centre in North America. (2/3)

BC’s world class film and TV studios support 42,000 jobs for British Columbians and investments of over $2b/year in our economy. (3/3) 📽️📺

“Thanks to productions like [Deadpool], #Vancouver is the 3rd largest film and TV production centre in North America,” wrote Sajjan.

In recent years, Vancouver has been the filming location for big budget movies such as Pirates of the Caribbean: Dead Men Tell No Tales, Power Rangers, War For the Planet of the Apes, Star Trek Beyond, Tomorrowland, and Fifty Shades of Grey.

The city is also the production site for a number of television series, including CBS’ Zoo, Netflix’s Lemony Snicket’s A Series Of Unfortunate Events, ABC’s Once Upon A Time, and various DC-comics based CW shows – Arrow, The Flash, Supergirl, Legends of Tomorrow and Supernatural.

Reynolds has been spotted many times around Vancouver during the filming of Deadpool 2.

Earlier this month he stopped to thank Vancouverites for putting up with the road closures and the Vancouver Police for coordinating the traffic.