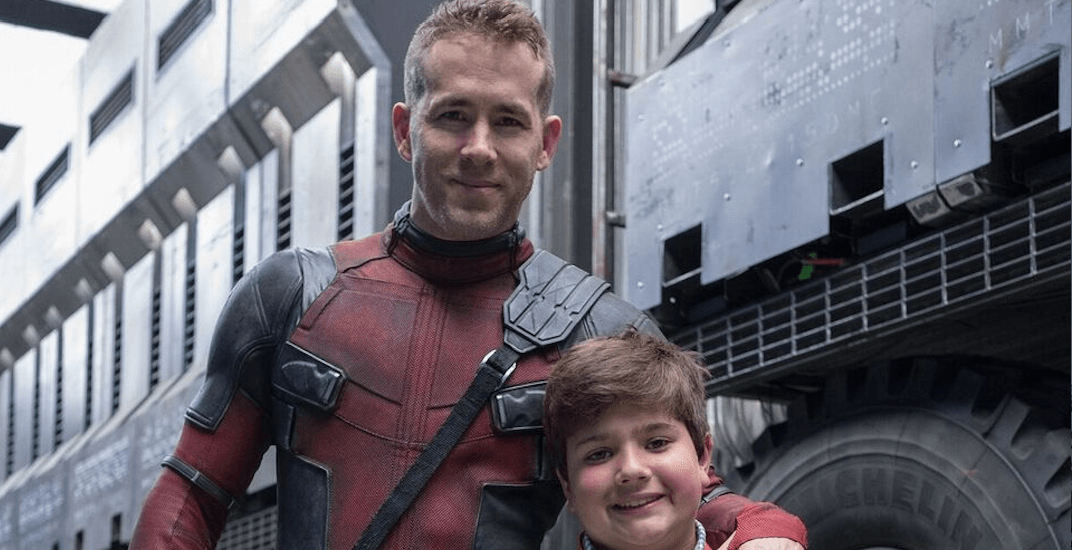 Ryan Reynolds and Jake Shield on the set of Deadpool 2. (Children's Wish)

Spending the time on the set of Deadpool 2 in Vancouver recently was the “best day of his life” for 10-year Vancouverite and cancer survivor Jack Shields.

The occasion was organized and set up by the BC and Yukon Chapter of the Children’s Wish Foundation (CWF) after Jack, asked CWF last year if he could meet his favourite star.

But it didn’t end there.

Jack also wrote a letter to Reynolds, detailing how cancer had changed his life as well as mention that Jack’s dream job was to “become a Canadian actor and comedian just like Ryan Reynolds.”

Reynolds then invited Jack to spend a day on the Deadpool 2 set, complete with the full movie star treatment.

On the morning of September 25, Jack was picked up in a red Ferrari convertible (from his home in Langley) courtesy of ScenicRush, and driven to the set with his parents and older brother.

He was then set up with his own personalized director’s chair inside the sound stage, complete with a Producer’s head set, giving him an inside glance into the filming of this blockbuster film.

It wasn’t long before Reynolds himself joined Jack and his family to talk about his journey battling Acute Lymphoblastic Leukemia and his love of acting. Jack called the experience  the best day of his life.

“There were many proud moments for us at Children’s Wish,” said Jennifer Petersen, Provincial Director of the BC & Yukon Chapter. “Watching Jack meet this homegrown Canadian celebrity… was really humbling.

Jack and his family, she added, “have suffered a lot in the past few years and I know this wish will propel Jack’s love of acting and his new love for life.”

Children’s Wish is a uniquely Canadian wish granting organization that has granted nearly 25,000 wishes across Canada over the last three decades.