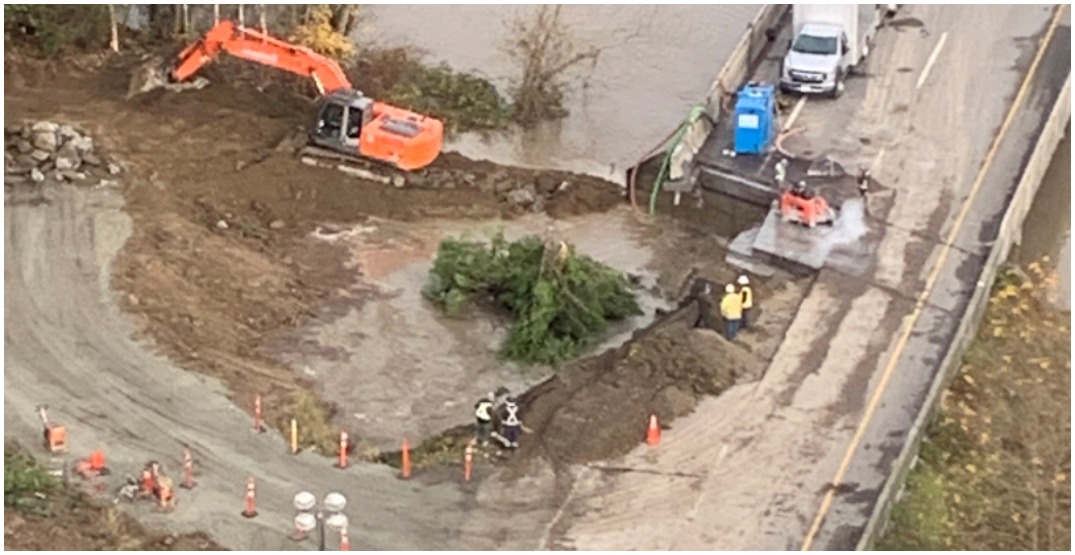 The Mayor of Abbotsford has provided an update on the flooding situation in parts of the City and extended a state of emergency.

The local state of emergency will remain in effect until at least November 29.

Mayor Henry Braun also provided an update on what’s happening in the area — including the situation for Sumas Prairie, which has seen devastating flooding.

Crews have been working furiously the last two days and have now sealed the breach in the Sumas Dyke near Number 3 Road which has stopped the flow of water from the Sumas River into the eastern part of the Sumas Prairie. pic.twitter.com/DvaedP0nrM

Braun says the floodgates have been opened and water is now flowing straight from the Sumas River into the Fraser River.

More good news: The floodgates have remained open since yesterday and are now fully open. With the gates fully open, & the Sumas Dyke repairs currently stopping the flow into the eastern Prairie, the water levels in the Sumas Canal have now lowered & will continue. pic.twitter.com/VLHHNvwkyk

At one point today, water levels dropped by three inches in six hours in part of Sumas Prairie.

View the aerial video of crews repairing the breach in the Sumas Dyke near Number 3 Road. pic.twitter.com/KQBYd5QoYl

Despite the good news, Braun says the City is still, “a long way from being out of danger.”

He points to the upcoming weather forecast, which includes more rain.

Braun says dozens of members of the Canadian Forces have been working with crews to support flood mitigation efforts and have been cleaning culverts and debris.

There are still repairs being made to the drinking water system, according to Braun.

He also says Abbotsford is working with the provincial and federal governments for supports for farmers.

At this point, more than 800 people have registered at reception centres and more than 200 have utilized support services.

There are still major repairs the need to be made to the road and transportation network.

Police Air Support Services, Air 1, is currently in the sky taking images of the current damage and flooding. This photo shows some of the extensive damage to Highway #1, east of No 3 Rd in the westbound lanes. Crews are working incredibly hard around the clock. pic.twitter.com/z08yd6Dbke

Another update is expected Monday afternoon.