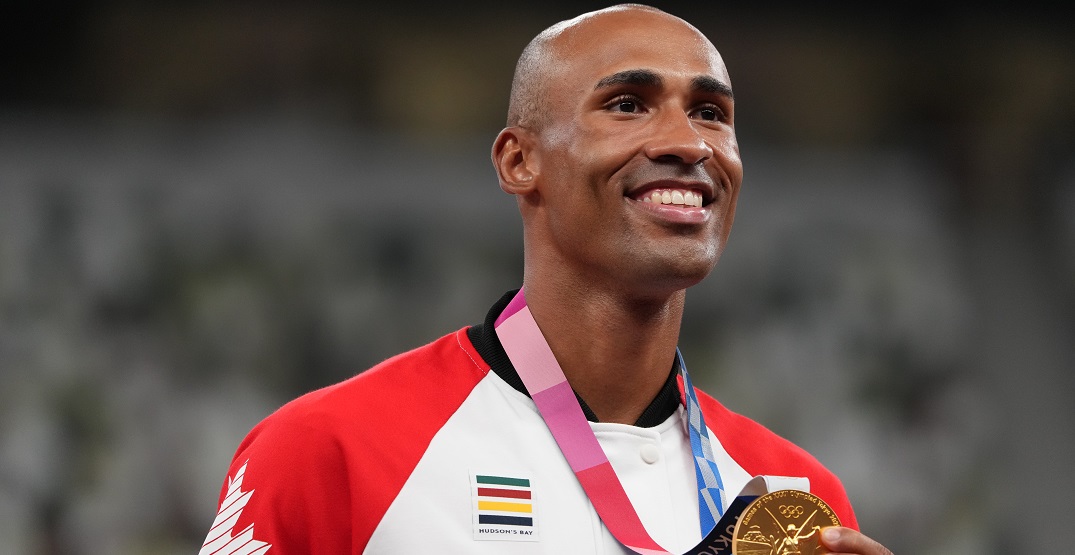 Not much can stop Olympic decathlon gold medallist Damian Warner.

If you were selecting the world’s greatest athlete, Warner’s name could definitely be considered. Competing in ten different events, Warner set an Olympic record with 9,018 points in Tokyo with the fourth-highest decathlon score in history.

It turns out he still is human, however, and has to deal with the same day-to-day issues as everyone else.

“I’m gonna have to wait,” Warner said with a laugh after trying to answer questions while a voice over the intercom alerted hotel guests about the situation’s all-clear.

The world’s greatest athlete label is a standard title thrown on the decathlon gold medallist after each Olympics, based on their all around skillset in ten disciplines.

“I don’t really put too much stock into it,” Warner said of the title. “There’s not necessarily any kind of criteria on how to judge that. So it kind of just goes by personal preference and some people believe that and some people don’t.”

Warner’s performance in Tokyo earned him the honour of being Canada’s flag bearer at the closing ceremonies.

“I’m happy enough that on those two days, I was the best decathlete in the world,” Warner added. “Anything else that other people want to label it they can do so.”

Warner has less than three years before the Paris 2024 Olympics, with plans to defend his title.

“I still think that I have things to improve in the sport,” Warner said. “I think [the shorter time between Olympics] works out awesome for me. So as long as I can stay healthy, I think that you’ll definitely see me in Paris.”

A big basketball and football fan as well as a player in both sports in high school, Warner said he wanted to “be like Vince Carter” while growing up in London, Ontario.

But it was in athletics where Warner found his true niche — or ten of them, rather.

“I originally wanted to go to the Olympics as a long jumper,” Warner said. “Then I found out what the decathlon was and since then all my time and energy has kind of been invested in that.”

Warner’s 100m time in Tokyo of 10.12 seconds was faster than six semifinalists who finished the race, and just 0.23 seconds slower than Canadian Andre De Grasse, who won the bronze medal.

“There are some like thoughts in the back of my head on what would happen if I focused on sprinting,” he said. “I don’t know how fast I could be, but I feel like I can make 100m finals.”

Warner, who won the bronze in the decathlon at the Rio 2016 Games, sprained both ankles in 2019 but still managed a third-place finish at the World Championships in Doha, Qatar.

With the challenges associated with the pandemic halting major track and field events, it was the final competition he’d have for nearly two years. Training mostly in London’s Farquharson Arena as the University of Western Ontario shut down their track facilities, Warner was mostly left by himself training for Tokyo.

This past March, Warner became a father to a son, Theo, with partner Jennifer Cotten, a former elite hurdler herself.

“Everything was just going insane,” Warner said. “Then we had little Theo and things that kind of just slowed down ever since.”

Warner said he’s looking forward for the chance to travel the world with Cotten and Theo at future competitions, as well as just simply going on vacation to places like Tokyo that he didn’t get as much time as he’d like to explore in based on tight competition schedules.

“It kind of puts things into perspective and kind of realize what’s important,” Warner added. “Being a father was the first and foremost thing, and it kind of just brought some balance to my training so I didn’t really have to stress too much. I would just show up to do what was required and the results were kind of speaking for themselves.

As for how he breaks down his training, Warner said there’s definitely a tough balance trying to prepare for so many events, but said he works on emphasizing his strengths.

“The reason why I got into the decathlon is because I’m a good sprinter and a good jumper so it would be a mistake to kind of go away from those events,” Warner said.

As for what drives him to continue in the decathlon, Warner thinks he can still score higher than his Olympic record in future meets.

“There’s always so many things [decathletes] can learn,” Warner added. “And I think that’s the reason why I think that decathletes, as long as they can stay healthy, can do this for a long, long time.”

But for now, he’s just looking to spend a little extra time with family and friends celebrating his accomplishments at this year’s Olympics.

“I think we spend so much time training and focusing on something specific that when we finally accomplished that I think it’s important to kind of take that in and enjoy that experience because these don’t come around too often,” Warner added.

Damian Warner’s partnership with Sobey’s #FeedTheDream campaign has been one of the ways he was able to help appreciate the journey he’s been on.

“They’ve been nothing but supportive of me from the very beginning,” Warner said. “[I appreciate] even the little things like filming and commercials that we did. I’ve done some commercials in the past and a lot of times it’s just been me so it was really nice to kind of showcase my coach and my mom and Jen as well.”

#TeamCanada’s Tablecloth is finished, and wow…look at it! I want to thank everybody for sending in their messages of support over the last few months, you helped #FeedTheDream of #TeamSobeys as we competed in Tokyo. Thank you, Canada, and thank you @Sobeys pic.twitter.com/0AwHxzcdVz

At age 31, Warner is aware that there’s no guarantees for how long his competitive window will be open. But when people do look back on his career, Warner wants them to see his persistence through injury and other setbacks en route to becoming an Olympic champion.

“When it is time for me to hang it up, they’ll see like there wasn’t always a linear path necessarily,” Warner said. “But once he figured it out, we saw what he’s capable of.”