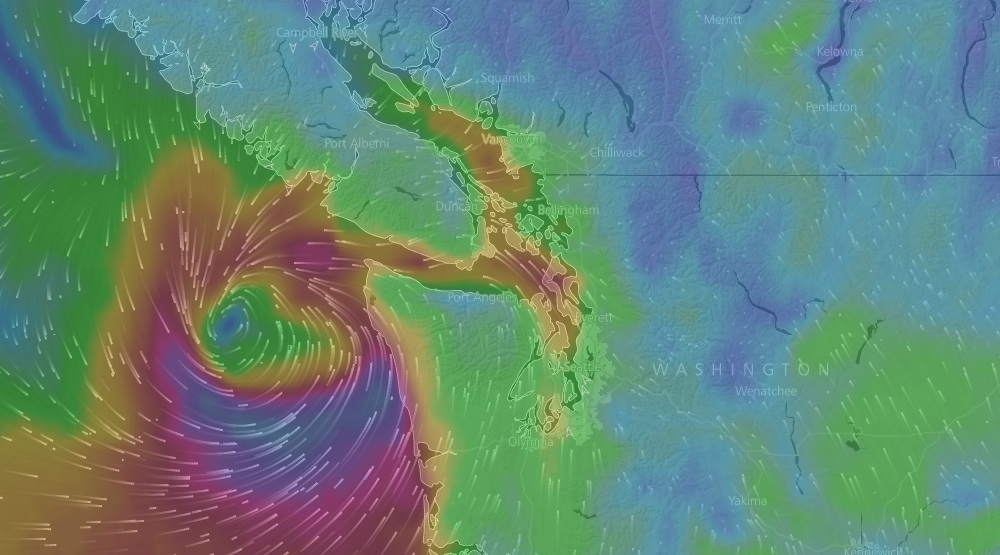 Power outages from fallen trees and branches have already been reported across the Metro Vancouver region ahead of the arrival of the strong mid-latitude cyclone, a low pressure system with winds that rotate clockwise.

This storm is more potent than the typical fall storm as it has been fuelled with the remnants of Typhoon Songda. Its edge hit Oregon earlier this afternoon and has now reached Washington State, where winds by the coast have been clocked at above hurricane force.

The centre of the storm will make landfall at Pacific Rim National Reserve at approximately 7 pm and continue tracking northeast towards the Lower Mainland.

High winds are expected to develop later into the evening, with winds potentially exceed 90 km/hr in Metro Vancouver. The winds are forecasted be strongest between 9 pm and 2 am, and heavy rain is expected to redevelop.

Approximately 15,000 customers with BC Hydro in the region were without power earlier, but at this time this number has since gone down to just below 9,000. There have also been reports of tree fells in some areas.

On Burnaby Mountain, a tree collapsed onto a car on Gaglardi Way and forced TransLink to reroute bus to Simon Fraser University’s Burnaby Mountain campus for a period of time. No injuries were reported.

Two bus routes running to UBC, the 41 and 49, are using alternate routes at this time due to tree debris on Wesbrook Mall.

Both Stanley Park and Fright Nights at PlayLand are closed this evening as a safety precaution.

Boundary Bay residents still out and about watching waves go over walls. They say they’re used to it but salt water ruins plants #BCStorm pic.twitter.com/YNnXG2fvN8

Wind picking up. Homes along the water at Boundary Bay seeing a lot of water splash over walls onto backyards. #Delta #BCStorm pic.twitter.com/EjhAq2b12r

Flood on Amer side, police shutting down road. @CorpDelta worker says no floods on #Delta side yet but water known to seep through #BCStorm pic.twitter.com/SzAEo7mprS

This is #Tsawwassen at 6:30, one of the areas #BCStorm is expected to hit hardest. 100km+ winds? pic.twitter.com/cp0Br3qbhp