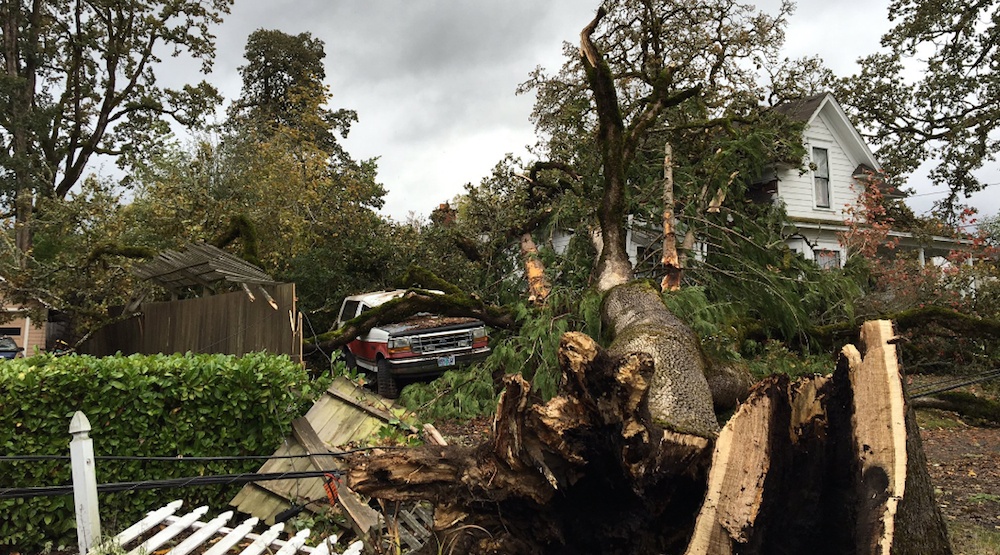 The power of the rain and wind storm fuelled by the remnants of Typhoon Songda is now apparent in Oregon where the storm is only expected to sideswipe the state.

The storm is approaching the Pacific Northwest from the southwest and is expected to affect Washington State later this afternoon before directly hitting southern Vancouver Island and Metro Vancouver beginning late evening.

Winds of 137 km/hr, far above the hurricane force threshold, were recorded at Cape Meares just after 2 pm, according to the US National Weather Service (NWS). Over at Portland International Airport, winds have picked up to approximately 85 km/hr.

Videos of the high winds in Oregon:

2PM video: Its a little windy here on the coast near Manzanita…. #LiveOnK2 #orwx pic.twitter.com/rq2EM1TYOv

Tens of thousands of customers are without power in the state due to fallen trees and wires. Authorities in Portland have issued a public warning to residents to stay indoors and keep off the roads due to flying debris, traffic signal failures, and live power lines on the ground.

Portland’s light rail system, the MAX LRT, is only semi-operational; trains are significantly delayed due to power outages and localized flooding.

Extensive damage has been reported in some areas of Portland.

The NWS says winds are expected to pick up in the Seattle metro region over the next two hours. At Chehalis, Washington, just south of Olympia and about 70 kilometres east of the coastline, the latest readings indicate winds increased from 35 km/hr at 1:15 pm to 63 km/hr at 2:15 pm.

Weather conditions will change quickly: Environment Canada expects strong southeast winds of 60 km/hr to 100 km/hr to develop ahead of the storm in the South Coast late this afternoon, with winds strongest in Metro Vancouver from approximately 9 pm to 2 am. Winds will then shift to southwesterly behind the low.

Tree falls on 500 block of South Market Boulevard, traffic down to one lane south for three blocks #wawx pic.twitter.com/svo1Iz3ydr

Tree into a home. Holly Dr in Newberg pic.twitter.com/SUpDLK0bcX

Vancouver is starting to get hit with really strong wind gusts. Tree down in the neighborhood north of Evergreen High. @WashCoScanner pic.twitter.com/nIZkqtCLVl

@NWSPortland The result of a strong gust in Aloha. This roof is brand new…😣 pic.twitter.com/CBzOOz3BUp

Branch came down on my car while driving on Johnson Creek. Stay off the roads, y’all. #pdxweather #pdxtst pic.twitter.com/RnFVa1U4cQ

Power is out in Beaverton near SW Allen & Hall Blvd. #kgwweather pic.twitter.com/L6fDu2qohs