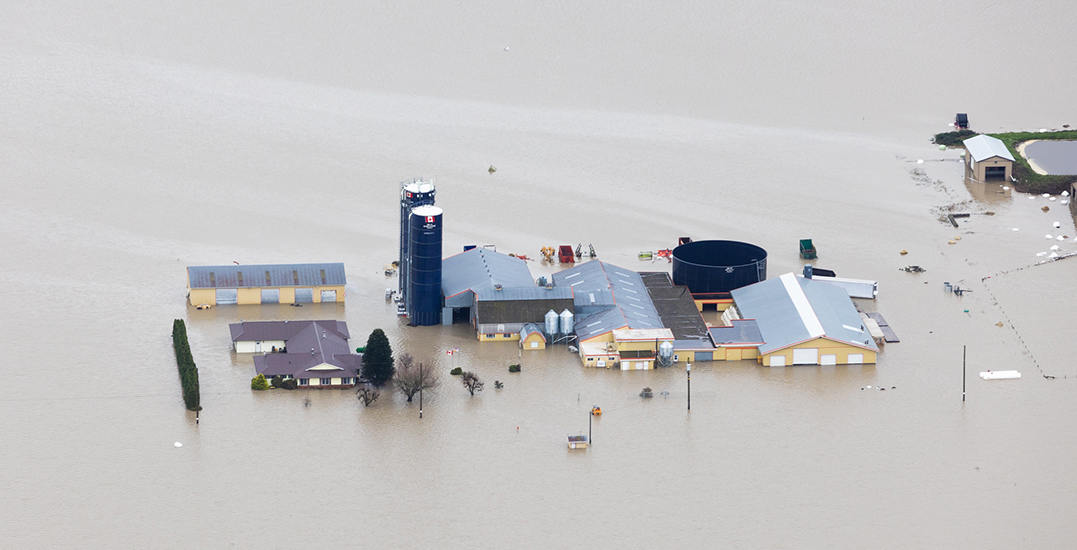 An aerial view of the flooding that devastated Abbotsford (BC Gov/Flickr).

An encouraging number of poultry and dairy cows have survived the devastating floods in BC.

The announcement was made by Minister of Agriculture Lana Popham during an Emergency Management BC update on Friday afternoon.

According to the BC Chicken Marketing Board, there were 61 poultry premises under evacuation alerts — 97% of laying chickens survived.

Popham shared more good news, saying that 98% of cows from the Sumas Prairie survived the flood, crediting “farmers working together and communities making sure that they had those farmers’ backs.”

She revealed one farmer’s dedication, who spent two days feeding his cows hay during the floods. And she recognized some local sports organizations that played a big role in helping out.

“A dairy farmer I mentioned last week, who spent 48 hours feeding his cows hay while they stood neck-deep in water, let me know that as soon as the waters were able to recede enough, the Abbotsford Rugby Association came in and helped him clean up those barns,” Popham says.

“They cleaned hundreds of stalls and even assisted the family, removing stuff from their soggy basement. And after they did that, they moved on to help other farmers. I’ve also heard that the hockey team did the same thing.”

This glimmer of hope comes after BC revealed a devastating death toll for animals affected by the floods. The Ministry revealed that 628,000 poultry, 420 dairy cows, and 12,000 hogs were estimated to have lost their lives on Thursday.

“As I mentioned yesterday, as the waters recede, we can get a better picture of mortalities,” Popham says. “Our hearts continue to be with the folks that are struggling with the very difficult situations that are happening right now.”

Earlier reports from BC officials suggested that thousands of animals would lose their lives, but these new numbers far exceed initial projections.