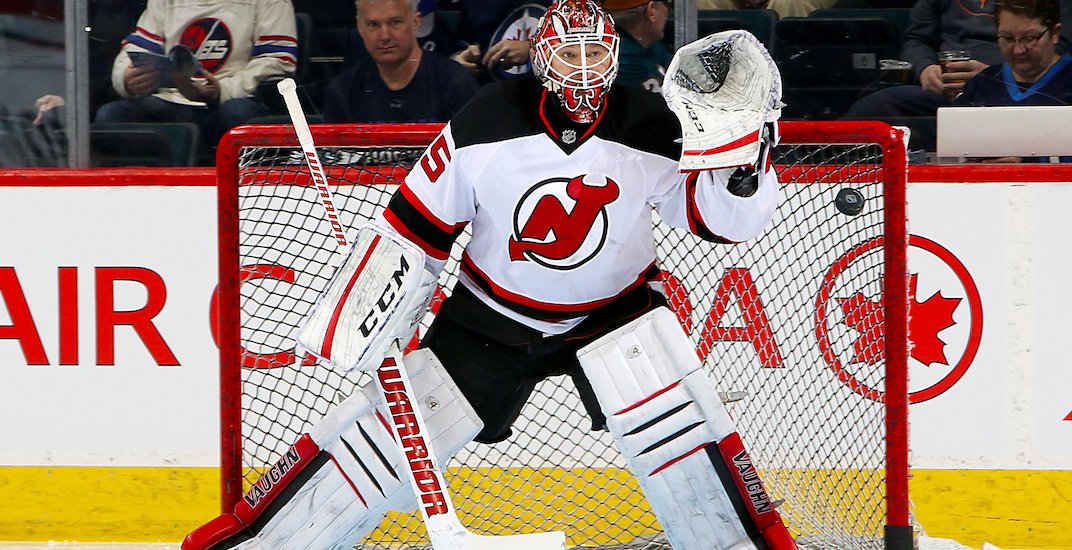 When the Canucks traded Cory Schneider to New Jersey at the 2013 NHL Draft, they dealt away a 27-year-old star goaltender with a bright future.

Five years later, Schneider looks nothing like the goaltender fans in Vancouver came to know.

The former All-Star hasn’t won a regular season game for the Devils in 11 months and is off to a brutal start to the 2018-19 season.

After a three-game rehab stint in the AHL to start this season, Schneider has struggled mightily since being called up. He’s 0-5 in five NHL starts, with a 4.27 GAA, and a .863 SV%. His goals against average and save percentage rank dead-last among goaltenders with 5+ starts this season.

Schneider’s struggles began midway through last season, as he played through pain. He missed five weeks with a groin injury aggravated on January 23 and needed offseason surgery to repair torn cartilage his hip.

Subsequently, he went 0-10-2 down the stretch with a 4.04 GAA and .863 SV%. He began losing starts to backup Keith Kinkaid, and when the playoffs began, Schneider was benched.

Schneider found his way back into the crease in the postseason and, to his credit, was sensational (1.78 GAA, .950 SV%) in three and a half games. Despite strong numbers, Schneider was only able to secure one win before the Tampa Bay Lightning eliminated the Devils in five games.

Playing against that same Lightning team in his most recent start on Sunday, Schneider surrendered four first period goals en route to a 5-2 loss, with the first goal of the game coming as a result of a puck-handling miscue.

Some chaos behind the net gifts Alex Killorn an easy goal on Cory Schneider. pic.twitter.com/4H73tQQvCu

Schneider is now winless in his last 17 regular season starts, dating back to December 27 of last year.

“We have to try to continue to help him get to the level he needs to get to, to be able to win a game,” said Devils head coach John Hynes.

Schneider wasn’t shy in sharing his feelings with reporters after the game.

"It's not really fair to my teammates the way I played to start the game." – Cory Schneider after #NJDevils loss in Tampa pic.twitter.com/EF8Jt2YSvm

“It’s tough when your goalie gives away the game in the first period,” Schneider said, putting it bluntly. “It’s not really fair [to my teammates] the way I played to start the game… To spot [our opponents] a 4-1 lead, it puts my teammates in a bad spot. It’s just disappointing for me.”

Schneider’s struggles aren’t helped by injuries, though his numbers didn’t exactly sparkle in 2016-17 either, when he compiled a disappointing .908 save percentage. Following that season, the Devils hired Schneider’s old Canucks goalie coach Rollie Melanson.

The Melanson hiring seemed to work early on last season, as Schneider won 17 of his first 28 games, compiling a .923 save percentage, before his losing streak kicked in.

The Devils will hope the 32-year-old can regain his form, as he has three more years remaining on a seven-year contract after this season, carrying a $6 million annual cap hit.