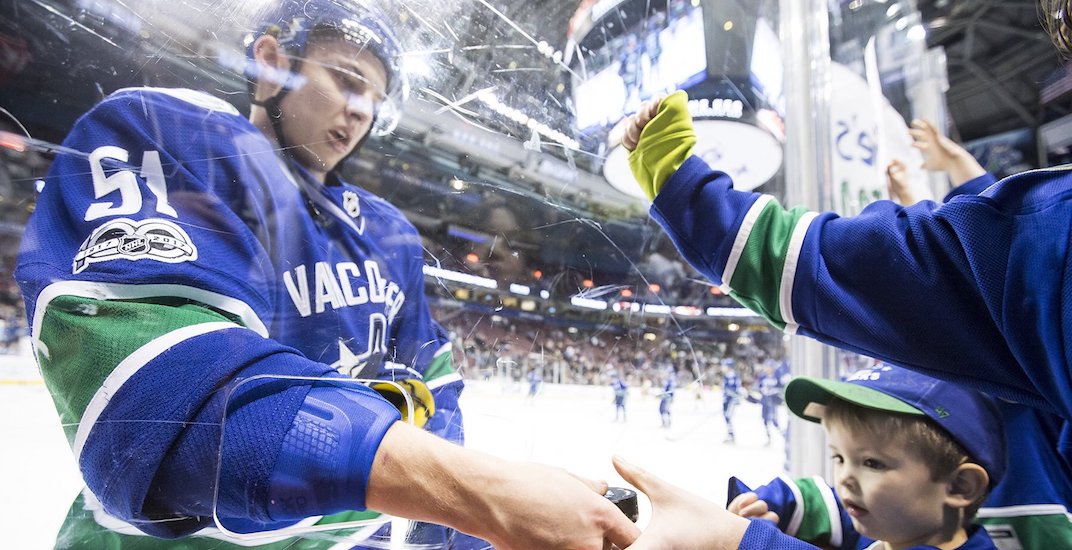 Coming out of the Remembrance Day long weekend, the Canucks were scoring goals and picking up points in the standings. They were the toast of the town with a 10-6-2 record and had earned points in six straight games.

Two of those six games were losses, both in shootouts to Detroit and Buffalo, in games they deserved to win.

Since then, it’s been a free fall of sorts.

The Canucks have lost six in a row, failing to pick up a single point in each of their last five games. Given they were expected to finish near the bottom of the standings with a healthy roster, we probably shouldn’t be surprised at their latest losing streak has coincided with a slew of injuries to important players.

On Monday, the Canucks looked totally ill-suited to defend the Winnipeg Jets’ attack – getting outshot 23-7 in the first period and losing the game 6-3.

No matter how you shake it, winning games was always going to be a struggle for this team, though they appear to be making life more difficult than they need to.

The case for Stecher

The Canucks are underutilizing Troy Stecher, who played just 15:40 on Monday.

Not only was that the lowest ice time among all Canucks defencemen, it was lower than seven forwards – including the likes of Sam Gagner, Markus Granlund, and Tyler Motte.

Stecher is averaging the least amount of ice time among Canucks regulars on the back end this season, at just 17:08, down from 18:49 last year and 19:59 the season before that. It’s due in large part because Stecher is the only regular blueliner that Travis Green doesn’t use on special teams.

And that is puzzling.

Following an impressive rookie season in Willie Desjardins’ final year as head coach, Stecher had to prove himself all over again upon Green’s arrival. Despite being named the team’s best defenceman in 2016-17, Stecher played under 15 minutes in each of the first three games of last season and played over 20 minutes in just two of 26 games.

As the season wore on, Stecher appeared to gain the confidence of the coach, as Green began playing him more regularly, and not just because of injuries to other defencemen.

Troy From Richmond with the diving defensive play, then backs his ass up like he's trying to avoid a ditch in Garden City to complete his shift. pic.twitter.com/vsmhYYmeMc

But for whatever reason, it’s back to square one for the Richmond native this season.

Stecher isn’t counted on to play the power play (0:20 per game) or penalty kill (0:59). And at even strength, he’s seen just 15:49 per game, a higher average than only Michael Del Zotto and Alex Biega.

There’s a strong case to be made for Stecher playing more in all situations.

While Stecher is never going to get consideration for the Norris Trophy, the 24-year-old is a better defenceman than he’s getting credit for.

Listed officially at 5-foot-10 and 186 pounds, Stecher doesn’t fit the prototypical profile of an NHL defenceman. And perhaps that’s where a bias against him comes into play.

Don’t let his small stature fool you, Stecher plays bigger than his height, and that’s backed up with numbers.

Look. Troy From Richmond learned to fight at the Night Markets. You do not mess with Troy. pic.twitter.com/rYkF8qadNb

First, let’s begin with the traditional stats. Stecher is tied for second in points (7) by Canucks defencemen this season, trailing only Ben Hutton (9). He’s also the team’s plus-minus leader (+7) by a wide margin.

Digging deeper with a larger sample size and more sophisticated data courtesy of NaturalStatTrick.com, the evidence suggests that Stecher is most under-utilized on the penalty kill.

Stecher has the best shot suppression rate (66.7% Fenwick-against per 60 minutes at 4-on-5) among the six Canucks defencemen that have played more than 40 minutes of 4-on-5 since the beginning of last season.

When everyone’s healthy, Stecher probably doesn’t figure into the team’s power play plans. But with Edler out of the lineup?

You can make a strong case for Stecher over Pouliot, who has just one power play point to show for in 61:55 on the ice with the man advantage this season.

Stecher is hidden behind Tanev and Erik Gudbranson among right-shot defencemen, and that should change. Gudbranson has the size, contract, and pedigree of a top-four defenceman, but the numbers don’t support it. Since the beginning of last season, Gudbranson has been the worst Canucks defenceman at suppressing shots on the penalty kill (4-on-5) and has the worst Corsi-for percentage at 5-on-5.

Swapping Stecher for Gudbranson on the depth chart isn’t going to move mountains, but it’ll improve their chances of winning hockey games.