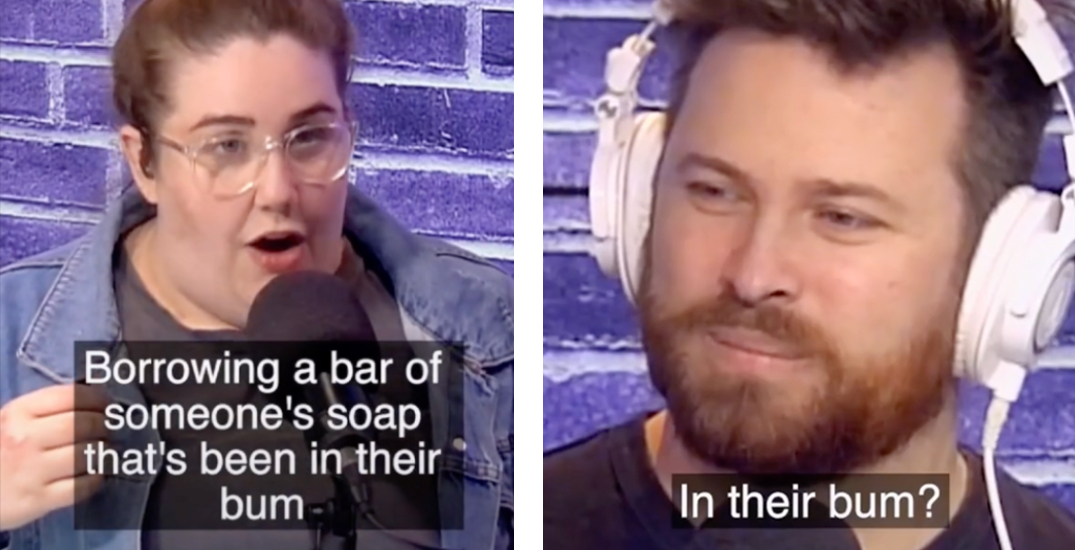 The internet has been debating shower etiquette for years now, and netizens’ newest focus is on the correct way to use bar soap, thanks to a TikTok.

Australian podcaster Ryan Jon Dunn and his co-host Toni sparked a major discussion after they posted a snippet of their podcast Toni & Ryan on TikTok on Wednesday. The two were discussing the usage of bar soap in particular and whether it can be shared between individuals hygienically.

Toni was not into the idea of using someone else’s bar of soap because “it’s been in their bum” which left Ryan in shock. “In their bum? How are you guys using soap at your house?!” he said, interrupting Toni’s impassioned speech.

The co-host clarified that she meant the bar of soap makes contact with its user’s nether regions, but Ryan argued that the correct way to use it is to create soap suds in your hands and lather up your body, without directly putting the bar in and around your bare butt.

This left Toni in a contemplative, silent pause. “What?” she exclaimed. “Is that actually how you use a bar of soap?”

Turns out, people use bar soap in very, very different ways, and you’re probably best avoiding sharing a bar with someone else — you know, in case they’re lathering their bum directly with it like Toni.

But the real kicker is in the comments. Many viewers said they were in Ryan’s camp or Toni’s, but a majority had a third method — they wondered why neither of the hosts mentioned a washcloth, rag, loofah, or scrubber.

This third camp’s preferred way of using solid soap is to simply foam up a loofah or washcloth with it, and then use that to scrub themselves squeaky clean, and then rinse with water. In this method, there are no bars going around — and God forbid, in — your butt and getting contaminated with booty bacteria.

Those who don’t use liquid soap at bath time were prouder of their choice than ever.

“I’ve used soap at your house,” said a disappointed Ryan to his co-host towards the end of the video, just after Toni demonstrated her method. “I’ve been taking the bar into the areas that it needs to go!” she argued.

Soaps and shampoos in bar form have recently seen an uptick in popularity on social media, as people try to avoid using bottles of liquid soap in an effort to combat creating excess plastic waste.

So, how do you use bar soap? Let us know in the comments. Go on. Be honest.