This article is updated daily with new information

Coronavirus has been top of mind for all Canadians nearly every day since the World Health Organization declared it a pandemic, but what do the numbers actually look like?

As of March 29, the number of confirmed and probable coronavirus cases in Canada stood at 6,288.

Canada’s first case was discovered on January 25, and nearly two months later on March 20 the country surpassed 1,000 cases. From there, cases doubled to 2,000 in just three days. Cases doubled again to reach 4,000 by March 26.

But three days after that, on March 29, cases did not double again. They stood just over 6,000.

Sixty-five people in Canada have died so far because of the virus, with 17 of those deaths in British Columbia, 23 in Ontario, 22 in Quebec, and three in Alberta. 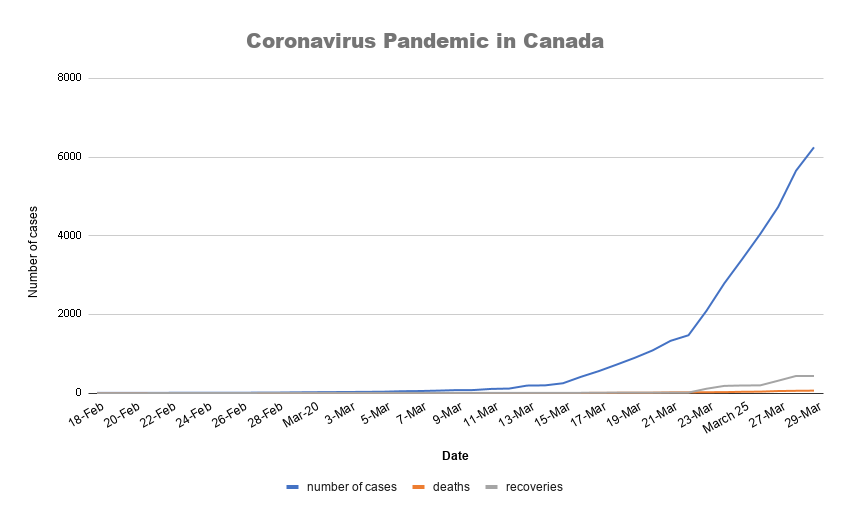 “Our window to flatten the curve of the epidemic is narrow. We have to act now,” Tam said in a press conference earlier this month.

As of 4:30 pm Pacific Time on March 29, the breakdown in Canada is as follows:

So while it may be scary to see the regular updates and the numbers increasing, stay home, self-isolate or physically distance yourself, and wash your hands to ensure we see the eventual flattening of the curve in the coming weeks and months.

Keep up with COVID-19 news here.